US (CA): Is habitat restoration killing plants in wildlands?

In 2014, plant biologists with the California Department of Agriculture reported an alarming discovery: native wildflowers and herbs, grown in nurseries and then planted in ecological restoration sites around California, were infected with Phytophthora tentaculata, a deadly exotic plant pathogen that causes root and stem rot.

While ecologists have long been wary of exotic plant pathogens borne on imported ornamental plants, this was the first time in California that these microorganisms had been found in native plants used in restoration efforts. Their presence in restoration sites raised the frightening possibility that ecological restoration, rather than returning disturbed sites to their natural beauty, may actually be introducing deadly plant pathogens, such as those related to Sudden Oak Death, into the wild.

New work by a UC Berkeley team in the College of Natural Resources shows for the first time just how widespread and deadly the threat of pathogens from restoration nurseries may be. 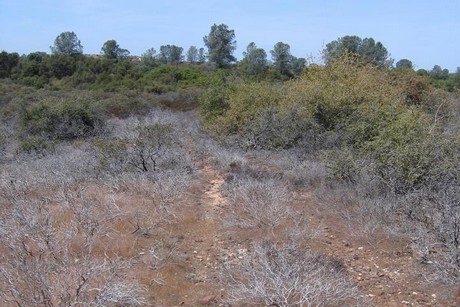 The exotic soilborne Phytopthora cinnamomi was introduced in the Ione area of the Sierra Nevada foothills, where it is literally wiping out two native manzanita species. This picture shows how vehicles spread the pathogen along roads and tracks by kicking up infected soil, killing nearby manzanita. (Photo: Matteo Garbelotto)

The team surveyed five native plant nurseries in Northern California and found that four harbored exotic, or non-native, Phytophthora pathogens. Strains of the pathogens from native plant nurseries were shown to be at times more aggressive than strains found in the wild, and some of them are rapidly developing resistance to the fungicides that can be used to control them, the researchers found.

Working with restoration nurseries around the state, the researchers showed that new management techniques, coupled with new methods for detecting pathogens, can help these nurseries limit the spread of exotic pathogens.

"Some of these restoration projects cost tens of millions of dollars, but of course their actual value is much higher, because of the wealth of services healthy natural ecosystems provide, including supporting animal and plant biodiversity, providing good water and air quality, and enjoyable recreation sites," said Matteo Garbelotto, UC Cooperative Extension specialist and adjunct professor of environmental science, policy and management at UC Berkeley.

"Such services are highly diminished in ecosystems affected by exotic plant diseases, while water runoff and erosion, the establishment of exotic plants and animals, and even hotter wildfires may increase in conjunction with disease outbreaks in natural ecosystems," Garbelotto said.

Pathogens evolve to outwit fungicides
Bacteria that make humans sick are constantly evolving to resist the antibiotics designed to fight them, and resistance to fungicides has been documented in microbes causing diseases in agricultural plants. Garbelotto and his team wanted to know if the widespread use of fungicides in native and ornamental plant nurseries could also accelerate the development of fungicide-resistance in plant pathogens.

Their research was spurred in part by their discovery of a new strain of the Sudden Oak Death pathogen in Oregon forests that is highly tolerant of a fungicide commonly known as phosphite, one of the main weapons used against plant parasites in the wild because its application does not cause any known negative environmental side effects.

Together with a group of New Zealand researchers, they decided to study fungicide resistance of Phytophthora -- a genus of plant pathogens that can cause lethal cankers and root rot -- to two important fungicides, including phosphite.

The researchers gathered numerous samples of Phytophthora from 11 species present both in forests and plant nurseries. They then tested the sensitivity to phosphite of multiple individuals per species.

While most of the species tested were overall still sensitive to phosphite, strains of four species were able to resist the effects of the chemical, the researchers report in PLOS ONE. These include Phytophthora ramorum, the parasite behind Sudden Oak Death in North America and Sudden Larch Death in Europe, and Phytophthora crassamura, a species first discovered recently by the same UC Berkeley researchers in native plant nurseries and restoration sites in California.

Some strains within each of these four species, although genetically almost identical to strains still susceptible to phosphite, were resistant to it. The presence of chemical tolerance or chemical sensitivity when comparing nearly genetically identical strains suggests that the development of resistance occurred relatively recently, perhaps in response to the widespread use of phosphites in native and ornamental nurseries, Garbelotto said.

"These pathogens can be literally flooded with these chemicals in plant production facilities, and at the beginning of the study, we hypothesized that in such predicaments these pathogens would be forced to evolve resistance" Garbelotto said. "Indeed, our hypothesis was correct, and we found that some of them evolved the ability to tolerate exposure to phosphite."

While phosphite can still help to spur a plant's immune system, this may not be enough to quell the spread of the disease, Garbelotto said.

"By pressuring these pathogens to evolve resistance to phosphites, we are effectively taking out phosphite as a potential tool to manage these disease outbreaks," Garbelotto said. "Furthermore, the ability to quickly develop tolerance to a fungicide may be an indication these pathogens can adapt quickly to new environments. Thus, they may become formidable invasive organisms, infesting larger swaths of natural areas and causing significant disease and mortality of essential native flora."

A widespread - but reparable - problem
Since the first discovery of Phytophthora in California restoration sites, research by the UC Berkeley team and others have traced the deaths of wild trees and plants back to strains of the pathogen originating in native plant nurseries, rather than strains already found in the wild. However, few studies have documented just how prevalent the problem is.

In a recent study published in the journal Plant Pathology, UC Berkeley researchers examined 203 individual plants across five restoration nurseries in California and found that 55 of the plants were infected with Phytophthora.

"We were able to prove that this is a widespread problem in California," Garbelotto said. "Most of the stock that they used is infested, and the levels were very high. For some species more than 50 percent of the plants we tested were infected."

The team then worked with the infected nurseries to implement new best management practices to try to limit the spread of disease without the use of phosphite or of other fungicides. These simple guidelines, which included more careful management of water runoff and soil to reduce cross contamination, reduced the prevalence of disease to nearly zero a year after implementation.

"We were able to prove that after a year of following the guidelines, those facilities were clear of pathogens, and other facilities that did not follow the guidelines still had the pathogens," Garbelotto said. "As a result of these findings, people are now putting a lot of money and effort into making sure that the plants are clean, by following similar guidelines and by making sure that no fungicides are used to avoid the development of resistance."