Dehumidification units now available on frames above the crop

Moisture problems in the greenhouse have always existed, but certainly in winter it is a challenge for many growers to dehumidify their greenhouse air. Previously the motto was: the heating high, the screen ajar and the air windows open. But that is not very energy efficient, and a lot of valuable CO2 is lost. That is why Royal Brinkman has, for a number of years now, the DryGair air dehumidification units in their assortment. Nowadays, many ornamental and vegetable growers have large moisture collectors, which are now even placed in the middle of the roof space (and if applicable because of the height) in between the crop. 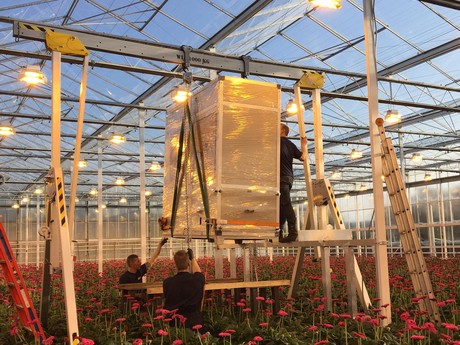 Eef: "When installing a unit on the concrete path or on an ebb and flow floor, it simply comes down to using the forklift and it is done. In order to also place the units in the crop, we have called on Van der Goes Europa bv to apply their expertise in placing cogeneration units, to position the DryGair units."

At Royal Brinkman, Eef Zwinkels is dealing with the units of Israeli origin. "The idea comes from Israel, where they have a lot of air-conditioning expertise. DryGair works like a cold beer bottle that you take out of the fridge. Like the moisture from the air condenses on the cold glass, so the moisture in the greenhouse condenses on cold panels in DryGair. Moist air is sucked in at the side and at the top blown back into the greenhouse, dry and slightly warmed up."

With the units growers can remove 4.5 liters of moisture from the air with one kilowatt hour at 18 degrees and an RH of 80 percent. The water runs along the panels in the unit to a container where it is collected and discharged via a hose. Besides drier greenhouse air, the main advantage is energy saving, says Eef. "I have examples where in the DryGair departments the tube temperature is at 0 degrees while in the control department a tube of 30 degrees is needed. In addition, the moisture guzzlers have a positive effect on the RH, AH, MD." 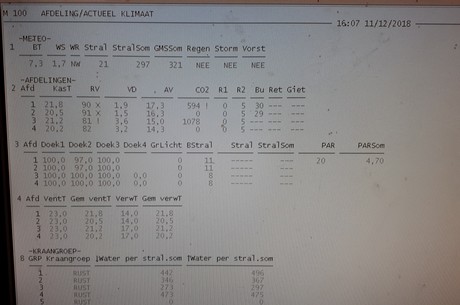 Predominantly ornamental growers have the units installed, about 95 percent according to Eef’s estimate. "In the gerberas alone, seventeen units are now being installed in the weeks after the IPM." But units are also used in greenhouse vegetable cultivation. "It is true that the more full the crop is, the greater the moisture problem. With many vegetable growers, the crop is still small and young for a considerable part of the year, so moisture in the greenhouse air is less of a problem."

Growers will have to consider whether the investment outweighs the energy savings and the better greenhouse air quality for the crop. "Too much moisture in the air promotes fungi, so if the greenhouse air is well under control, growers can save on crop protection agents. It is also possible to connect a liter counter to the unit, as growers themselves like to see the effect."

The rise of lighting in greenhouse vegetable cultivation in order to grow year-round means that Eef also expects an increase in the number of units in the cultivation of vegetables. On average, there are three units per hectare, but each crop is different. "At a young plant grower in Poland, they grow vegetable plants with six units on two hectares, but in basil cultivation, for example, it is five units per hectare."