The opening of the Dutch Lily Days was held at Onings Holland Flowerbulbs this year. Special guest during the ceremony was world champion short-track speed skater Lara van Ruijven. Team effort, collaboration and never giving up are the key goals of Van Ruijven, that she shared with the attendees. It was also her privilege to cast the first vote for the Lily League of 2019, the top-50 of the world’s most popular lily varieties. Visitors of the Dutch Lily Days are invited to follow her lead. After the lines are closed on June 12th, five winners will be selected. Each winner received a cheque of 200 euros. To become a world champion, you need collaboration with your team mates, but also with your competitors. Getting up after falling, surprising yourself and others, always giving your best. Goals that not only top athletes need to chase, but also professionals in the lily business. Eventually each person or company need to reach the hearts of the consumers. Lara van Ruijven was welcomed in a sea full of flowering lilies in all sorts, sizes, colors and fragrances. After walking around in the greenhouse, Lara selected here top-10. ‘Choice is always a matter of taste, but some lilies are really gorgeous. My number one? That is of course the lily I just baptized’, says Lara van Ruijven. 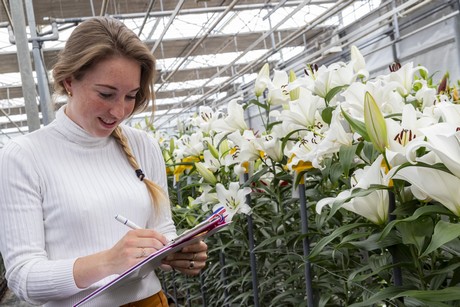 The Lily League is being held during the Dutch Lily Days with a purpose. Visitors from all over the world find familiar and unfamiliar varieties in the greenhouses of the participants. With the Lily League, Onings Holland tries to increase the general interest, but also the differences between types and awareness of cultivars. ‘Selecting your favorite top-10 lilies demands a moment of attention from the voters. Do you choose the traditional and well-known varieties, or do you focus on the new and potential ones. A good thing about making a top-10 is that you notice the activity of all the lily breeders and the inspiration you draw from the trials that are shown during the Dutch Lily Days’, says Evert van Zanten about the approach.

Five winners
Voters can send their top-10 until June 12th; this can be done filling in the form in the testing greenhouse of Onings Holland, or online via www.lilyleague.com. New this year is that there will be five winning participants instead of one. They will be selected based on five different categories. The winners and the new top-50 will be announced soon after the lines are closed.