As of this month, Dekker Chrysanten is making use of an LHV (longer heavier vehicle) combination. The use of the Volvo FH42T LNG is fully in line with the chrysanthemum breeding and propagation company’s aspirations to be more sustainable. The combination was supplied by the dealer LVS Trucks, which has already supplied 17 Volvo vehicles to Dekker Chrysanten. The company will refuel at the new NXT petrol station in Boekelermeer, owned by GP Groot. 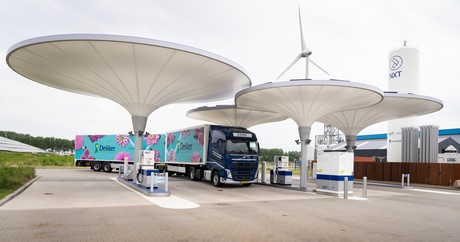 As a result of being able to store more pallets and its use of more environmentally friendly fuel, Dekker Chrysanten expects a substantial reduction in emissions. The 25.25-metre-long super lorry can hold 40 pallets, or a quarter million chrysanthemum cuttings, at once. A normal lorry can hold 26 pallets. This should result in 120,000 kilometres fewer being driven for the company over the course of a year.

Reducing emissions by 15% by 2025
The use of liquefied natural gas (LNG) as fuel will also contribute to greatly reducing emissions. Compared with conventional diesel lorries, LNG produces around 20% less emissions. This therefore is in keeping with the EU's ambitions to reduce average emissions resulting from transport by heavy vehicles by 15% by 2025. Road traffic in Europe represents approximately 5% of the total emissions of greenhouse gases in Europe. 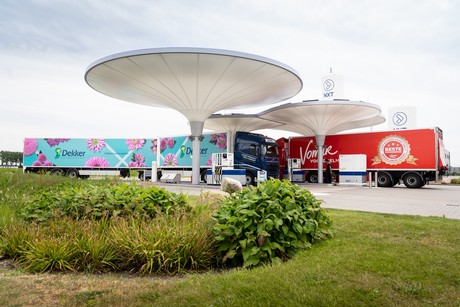 New NXT petrol station
With the opening of GP Groot's new NXT petrol station on the Boekelermeer industrial estate near Alkmaar, Dekker Chrysanten was given the opportunity to refuel close to home. GP Groot operates 52 petrol stations. LNG is a fossil fuel made from natural gas procured from Qatar, Norway, and other countries. GP Groot sees LNG as a fuel that can aid in the transition to bio-LNG made from sewage sludge, landfill gas, manure, and organic waste. Bio-LNG produces 80% less CO2 compared with diesel. Together with Hydrotreated Vegetable Oil (HVO) Biodiesel and hydrogen (which will be available at NXT Alkmaar from 2020), bio-LNG is one of the most important transport fuels of the future. Drivers employed by Dekker Chrysanten must participate in a special course to refuel their vehicle with LNG.

1,000-kilometre range
Volvo's FH42T LNG lorry has a 460-HP engine and can cover a maximum of 1,000 kilometres on a full 205-kilogramme tank. It is indistinguishable from the diesel variant in terms of driving performance, as promised by LVS Trucks (the 'preferred supplier' of Dekker Chrysanten since 1995). Both the reliability and the maintenance intervals of the LNG lorry are also similar to its diesel counterpart. One difference is that LNG lorries are quieter on the road. As specified by the chrysanthemum specialist, the LHV combination is limited to driving exclusively in the Netherlands, to destinations such as Westland, Bommelerwaard, and Limburg.