On the 6th of June around 3 pm, over 300 people were walking and pointing through a well-heated and very noisy installation room containing a maze of tubes and pipes. Over 120 people came to see the new biomass station of the three growers from Sirjansland during its official opening.

Which could be expected, given the fact that it is a unique project that does not only produce heat from wooden biomass but also CO2. This is something not before attempted on this scale using an installation consisting of 7 megawatts. The project saves about 7 million cubic meters of natural gas a year, with which seventy percent of the natural gas needed is changed to an alternative fuel. 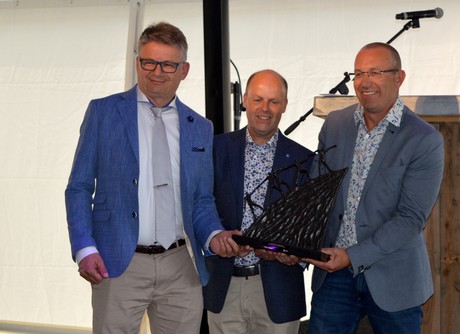 Eggplant grower Pleun van Duijn, together with tomato grower Dick van Noord and Arnold Groenewegen, the initiators of the Sustainable Energy Sirjansland (SES) project, took the people who attended back through time. About five years ago, as Pleun says, the entrepreneurs received signals from the market, society and the consumers telling them it was necessary to start thinking about an alternative energy source. Geothermal heat and bio-fermentation both seemed unattainable goals on the location in question, so changes needed to be made. When the men realized that much of the biomass in the region remained unused, the wheels started turning and the decision to install a biomass installation, with a CO2 capture installation that makes the project so unique, was made. 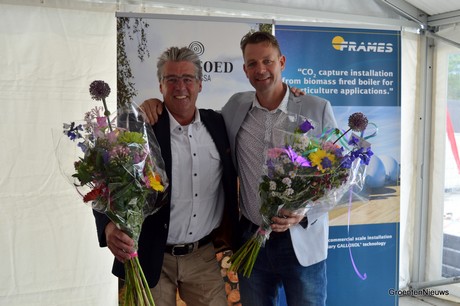 Operators John Timmers and Johan Sol were thanked for their efforts with flowers. Both men helped out the growers a lot as operators in terms of keeping the installation running.

No blackened hands
The construction eventually started in June of 2018, but a lot had to happen before construction could really begin. It would be too much to write out the entire preliminary stage here, but everyone can imagine that the necessary care and attention needed to be given to the people living in the surrounding area, the possibilities of gaining biomass from the region and to keep the whole thing as sustainable as possible, not to mention the collaborating itself. During the round of compliments as the speaker themselves called it, which followed Pleun’s speech, the three involved parties drew attention to the collaboration. Frans Roozendaal of Frames summed it up: “You really need to be a daring grower in order to take on such an adventure together.”

Many good anecdotes were told as well. Like the one Paul van Hooijdonk of Comgoed, which is in charge of supplying the wooden biomass, told about a visit Arnold, Dick, Pleun and himself made to a wood burning installation of a grower in Limburg at the start of the project. The grower talked to the visitors with blackened hands. 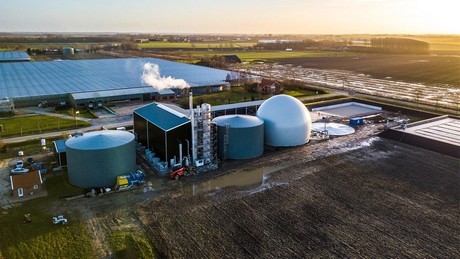 Fully automated burning to 140 degrees Celsius
It's not something that can happen at the Sirjansland location. Marc van Bemmel, a representative of the Belgian greenhouse heating installer Vyncke in the Netherlands, explained, in brief, the unique installation that looks nothing like the wooden furnaces the consumers are often familiar with. Woodchips and wood shreds from a bunker are put on a conveyor belt that eventually ends up in a boiler where they boil water to 140 degrees Celsius. This is a lot warmer than when using geothermal heat for instance, but this extra heat is needed in order to run the CO2 capture installation. 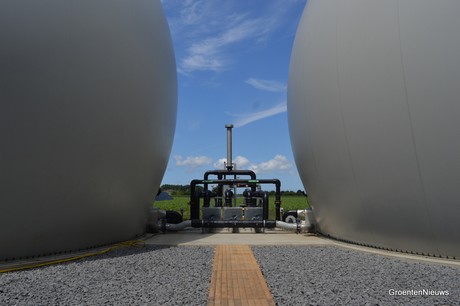 To view all of the pictures of the installation, see the photo report. 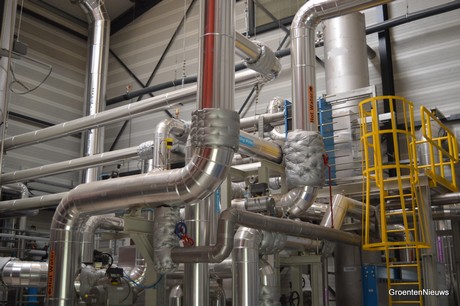 Frans van Roozendaal was the final speaker and closed off by focusing on a few of the points in which the installation is unique. The size, efficient heat consumption and also the level of automatization.  From the bunker, a crane supplies a constant supply of wooden biomass that, after burning, provides CO2 and a small amount of ash. “But it is mostly about the combination of it all that makes this project special.”

Above: mayor's speech and waiting for the crane.
Below: Waiting for confetti after pressing the button.

Burn to your heart’s content
Around three o’clock it was time for the official opening and mayor Gerard Rabelink was the one to press the button indicating so. The crane came into motion, confetti was shot into the air and everyone was able to look around the installation. The operators John and Johan, the three entrepreneurs and the suppliers involved, as well as the installers, were then able to tell about all of the ins and outs involving the project. 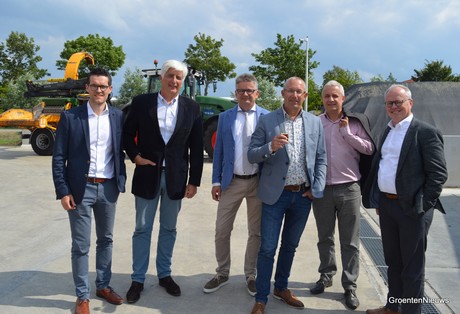 The installation was running at half its power for safety and noise reasons, which will also happen on the 8th of June during the open day. After that, they can burn to their heart’s content and they even involve a fourth grower (Organic Brothers) that will be taking the heat. But there is more good news: at the end of 2019, there will also be solar panels on the roof of the installation space.

Check out the photos here.