"So far, it has been better compared to last year and the season is not over yet", says Ben Hogewoning of My Peony Society, a platform that distributes the peonies of a selection of growers, when asked about the current season. "It all depends on the weather and this year it was more beneficial for the peony crops." 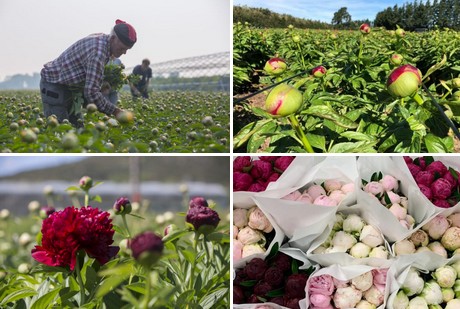 Better crop
"Last year, it was very hot and dry in many production regions like France and the Netherlands. It gave growers a hard time to produce a good quality crop; peonies do not like hot weather. This year, however, temperatures were lower, which enabled the growers to produce a better crop."

Better prices
As a result, the prices are better than last year as well. "I do not know the figures by heart, but they are as expected and we are satisfied with it." The majority of the peony stems are sold to Dutch exporters and wholesalers who send them all over the world, a maximum of 5 percent is sold through the Royal FloraHolland auction.

Increasing demand
Since the founding of My Peony Society, in 2015, the demand for their peonies has increased sharply. So what could be the reason? “Uniformity in what we supply, cooperation between grower and buyers, and above all, putting the collective interest first. With passion for the product.”

Longer season
Distributing peonies from more parts of the world (40 growers from 6 countries worldwide) and better cooling techniques enables My Peony Society to better adjust their supply to the demand. In turn, it also results in a longer season. "As we can store our flowers for a longer period, we can extend the peony season. Usually, it started at the beginning of April and ran till the end of June, beginning of July. Now, due to the better cooling techniques, we can extend the season with about 5 weeks."