How Alaska became a center of peony cultivation

When you think of peonies, Alaska wouldn't be the first place that comes to mind - until two decades ago. Patricia Holloway, a horticultural researcher at the University of Alaska Fairbanks, remembers a conference held by the university in the late 1990s. "A guest speaker was a cut flower grower from Oregon. From my presentation, this grower learned about hardy peonies blooming in July in Fairbanks. From the grower, I learned about the possibility of unique markets in late summer. I set up research projects to learn if we could grow peonies as field grown cut flowers. Nearly 20 years later, there are 136 growers in Alaska shipping peonies mostly as domestic exports to other states but also to Canada, and trial shipments to Vietnam, Taiwan, Singapore, etc." 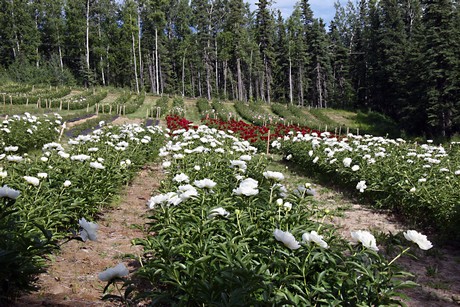 The latter in particular gives Alaska a unique advantage, Patricia says. "I have heard growers in northern Finland are trying to emulate what we started. I have no doubt there are niches around the world that could do the same thing. No grower here assumes we have a monopoly on this late season. However, many of the northern regions do not have the accessible transportation links that Alaska has - the 3rd largest air cargo hub in the world. That makes a big difference when transporting a perishable product."

Peonies being harvested at Northern Lights Peonies in Fairbanks (AK) and a peony in the fields of Pioneer Peonies in Wasilla Festiva Maxima (AK).

Diversification
So, why the choice for peonies in particular? "The peony is the first flower we learned about with the late bloom dates", Patricia explains. "Since then, we have found others - lily-of-the-valley, spiraea species, lilacs, etc. - that might prove interesting. However, Alaska has no history of growing cut flowers for export, and the learning curve for growers and researchers alike has been huge. Diversity will come as growers learn the industry."

She expects diversification to occur within the peony segment as well. "There are thousands of named peony cultivars, and we have just touched the surface. Most abundant right now are Sarah Bernhardt, Duchesse de Nemours, Felix Crousse, Festiva Maxima, but that is by no means the entire list. Growers are trialing a lot of cultivars from around the world in all flower styles and colors from the gorgeous yellow Garden Treasure to the finicky, but beautiful Coral Charm." Challenges
In other words, plenty of opportunities - but there are challenges as well. This season played havoc with Alaskan peony growers, especially since it was hot from Fairbanks all the way to the coast. "That might not have been a problem, but the lower 48 states were delayed by cold and rain. There is a bit of overlap with some regions of Alaska", Patricia says. "This is nothing new, however. Because peony is mostly a field grown cut flower, it is always susceptible to the whims of the weather, wherever it is grown. I hear people all over the world remarking on late or early seasons. Global warming is an issue for everyone - especially in the increasing unpredictability of the weather. Right now, there is no consistent pattern no matter where you are on this planet. Everyone should be concerned about global warming no matter where you are."

Alaskan peony growers are also facing crop protection challenges: "Like everywhere, botrytis gray mold is an issue, and we are actively pursuing research to minimize its occurrence both in the field and cold storage. We are researching management of thrips that could impact foreign export markets."

The University of Alaska Fairbanks is also researching best practices for growers in the state, since very little is known about optimum nutrition and fertilizers for peonies. "We produce outstanding cut flowers in Alaska but working with shippers to maintain the cold chain from growers to buyers is very frustrating. We are exploring methods of long term cold storage - right now the recommendation is max. 4 weeks storage to maintain quality flowers and vase life. How to extend that a few more weeks - that is a big question." But perhaps the biggest challenge of all is simply educating world markets about the availability of summer peonies.