Colombia: The 'mystery' of the decreasing hydrangea exports

The decrease in Colombian hydrangea cut flower exports, what could be the reason? Last week, we published an article with the export figures from January till May 2019 (- 4.7% in value and -3.5 % in volume compared to last year) and some possible reasons mentioned by Catalina Arango of Flores del Este. In a reaction to this article, Juan Gomez of Candelaria Flowers pointed out that cut hydrangea acreage probably has hit peak growth. But we received more reactions that shed light on this "mystery". Are the smaller US weddings, the vase life, the changing preferences or are the logistics the reason? They all seem to play a role.

US weddings getting smaller
The main market for hydrangeas is the US with 76.9% in value. When looking at the statistics of this year compared to last year, figures went down (-5.5% in value and -4.4% in tons). The flower is a popular wedding flower and according to Amy Hernandez of Esprit Miami, a US flower importer, the fact that US weddings are getting smaller might be a contributing factor to the decrease in exports. "Statistics I have read is that they are about 10% smaller guest wise and maybe even wedding party size too. Smaller more intimate events possibly creating a need for less amounts of flowers. We would feel it a lot and I feel we have seen much less weddings in 2019 as well."

Less demand
And when talking about weddings in countries like Qatar and Saudi Arabia, importer and exporter Ahmed Frindi of Frindi Flower Productions sees the demand for Colombian hydrangeas decreasing. "I work together with the best wedding planners in Qatar and Saudi  Arabia and we all prefer Dutch hydrangeas, even if they are a bit expensive but it adds much better value at the design. Also, many of my top clients got tired of this hydrangea flower, because everyone is using it. All in all, it has lost its status as an expensive flower. I also expect that in 2020 that I will decrease my purchase from Colombia because of this season and looking for other flower options. It is difficult to predict the other options, but I see a trend towards exclusive roses and peonies. And for the super-rich weddings, it will be a mix of cheap flowers, like greeneries with expensive flowers like Vandas and Phalaenopsis."

Vase life
In line with the statements of Arango and Gomez, regarding the low quality produced by many growers in the market, Robert Verbruggen of Chrysal highlights the vase life as a possible reason for the decrease in exports. "Consumers expect minimum 8 days pleasure in their houses." On top of that, and maybe as a result of the bad quality flowers on the market, he thinks that consumers are looking for new other flower types.

Cheap and bad logistics
Mauricio Gleiser of Vacuum Cooling Colombia, a vacuum cooling system and logistics services supplier, brings forward another issue which is related to this quality issue, namely cheap and bad logistics, and particularly during the holidays. "The core of the problem resides in the fact that Colombia emphasizes too much on holidays. Amounts increase drastically, but the infrastructure cannot handle these big numbers."

Medellin airport - bad infrastructure
According to Gleiser, airfreight operations out of Medellin Airport's (MDE) cargo terminal have been difficult for many years already. "Infrastructure was very old and insufficient (never enough to hold holiday volumes). And the atomization of the industry (farms+trucks) required much-increased storage space and many more reception doors than they planned."

Further, he adds, the rebuilding of the cargo terminal took several years longer, while imports dropped down to negligible figures. "Altogether airlines faced the urgent need to raise rates or abandon."

MDE to Bogota airport - cheap reached a peak
Many growers saw the need to truck their products into Bogota airport  (BOG) and some began considering the maritime alternative, which is based on the “temperature is more important than speed” principle, Gleiser explains. "Many people rushed into this alternative and tried to copy what was somewhat successful with a restricted selection of pompons into UK and found, the hard way, that it did not work for their hydrangeas. This is when "cheap" reached a peak and most corners were cut." 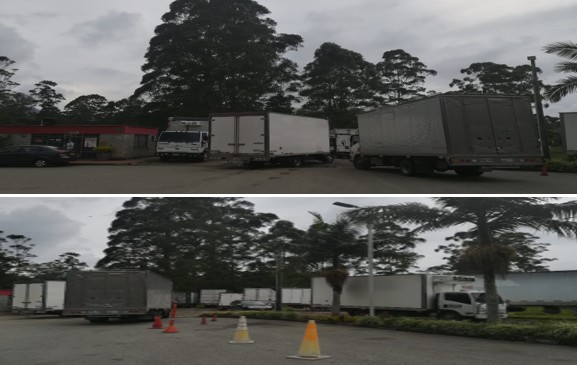 "The above pictures show the main “consolidation center” developed to solve the logistic crisis (the parking lot of a gas station near La Ceja growing area) where small trucks coming from the farms are feeding the larger ones, that shall drive into Bogota airport and farms. A similar but smaller one operates at the parking area of the airport!"

"Both ways are ”cheap”, but very costly in terms that growers are now finding out."

Solution?
"Many or even most damages to hydrangeas are caused by botrytis, which are not solved by just proper cooling. Removal of free moisture is the key, since botrytis spores activity continues down to 31F(-0.5ºC), Gleiser explains

According to him, the true, complete solution to validate the maritime alternative is to consolidate boxes in a secured place, x-ray scan boxes, vacuum cool them to 34-36 F, cold store and/or load them in a reefer truck into BOG (or MDE) or into a reefer container. "All three proven ways  to reach the US market with good and consistent quality product."

"This counts for whole flower industry in Colombia"
However, this does not only count for the hydrangeas, but for the whole flower industry in Colombia, he stresses. "The lack of minimum standards allows the “bad guys” to hurt everybody else. Since this happens the worst during holidays, no everyday sales are possible. For most Americans, such days, are their only flowers either purchased or received along the year and are the basis of their perception of value: will they buy again or not."

Goal
According to Gleiser, the goals should be reaching the holiday-only consumers with premium quality flowers and turn them into everyday fans. And what about the costs? "It would be much less than paying claims, losing prices or even the market."