The “knee setting” of Danish Jim Lyngvild’s own rose

A new rose has been baptized at the Danish Rose Festival (Rosenfestival), that is annually held in Bogense, on Funen, in the first weekend of August. The theme for this year’s festival was Nordic mythology and the guest of honour was Danish designer and Viking Jim Lyngvild. Here he named his own rose ‘Jim the Viking’ - a rose of Danish rose breeder Rosa Eskelund of Roses Forever that has already won a medal for its health and many romantic flowers.

Around 20,000 people showed up at the festival in Denmark to be a part of the celebrations. Before revealing the rose, Jim Lyngvild opened the festival together with Mayor Morten Andersen of Bogense. 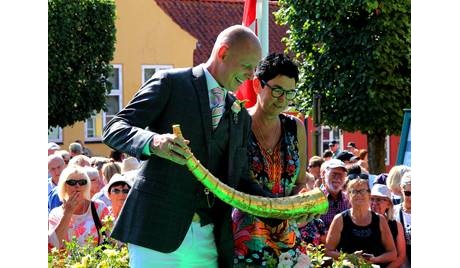 Jim Lyngvild and Rosa Eskelund at the ”knee setting” of ’Jim the Viking’ (photo: Ole Thrane)

A rose for Jim Lyngvild
Jim Lyngvild is a famous Danish fashion designer, writer, fashion commentator, and Viking. He lives on Funen in his self-designed fortress “Ravnsborg”.

Jim Lyngvild himself has been in the garden of breeder Rosa Eskelund on Funen, Denmark and seen the many beautiful roses before he chose his own rose. “My rose should be strong, wild, and natural,” says Jim Lyngvild and the rose chosen in the end was all three. "‘Jim the Viking’ is a natural rose. It is both graceful and beautiful, but also a strong and healthy rose", says Eskelund.

Naming of the rose
The naming of Jim Lyngvild’s rose was in true spirit with the Rosenfestival’s Nordic mythology theme. The rose was “knee sat” while the rose breeder, Rosa Eskelund, was telling about the new rose. The naming was performed with a copy of the gold horn, which was filled with mead – like a true Viking.

The ”knee setting”
"“Knee setting”, after the old Norse knésetja ‘to sit on one's knee’, is a ritual from the old North, where one would sit a child on your right knee hereby acknowledging it as your own", explains Rosa. "This would take place when the Vikings came home after expeditions where children had been born in the meantime. There are no ritual texts that survived the passage of time but it is believed that there would be water poured over the child and naming together with the “knee setting” – just like we know from today’s baptisms." 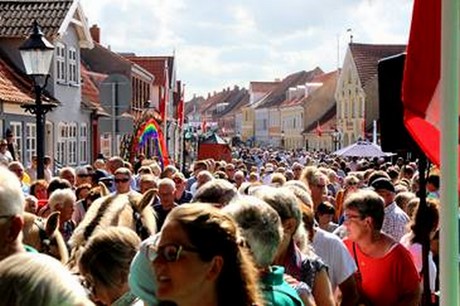 Several thousand people showed up to see Jim Lyngvild and his rose that was named ‘Jim the Viking’ (photo: Ole Thrane)

Jim’s rose
The rose is a shrub floribunda rose. "It is suitable as solitary or as a lightly scented hedge. Moreover, the rose is beneficial for the bees, as the rose opens it is possible to see the centre of the flower and bees love this as it is easier for them to get to the pollen."

IFTF Vijfhuizen
Curious about Jim the Viking’? In January, at the IPM Essen in Essen, Germany, it will be presented at the Roses Forever booth. But before, Roses Forever will show all their pot roses (Infinity, Roses Forever), cut roses and new pot roses varieties for 2020 at the IFTF in Vijfhuizen, the Netherlands, which will be held from November 6-8, 2019 (at booth B2.42).