Here it is, the photo report of the Four Oaks Trade Show 2019. At this two-day event, that was held on Tuesday 3 and Wednesday 4 September, over 350 companies gathered to present their products and services. Brexit and recyclability were the absolute main topics at the show, like we covered in our article last week. 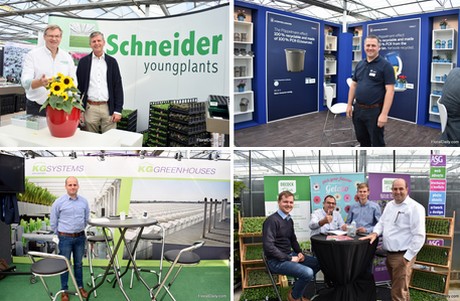 The Four Oaks Trade Show is one of the biggest horticultural fairs in the UK. It is a combination of business and social activity, but above all, it is a buyers show, which is particularly attractive to the grower, retailer and the independent garden centres. Also, this year growers from all over the country, including Ireland found their way to the nursery in Cheshire.

Also from abroad visitors were welcomed at the show. The shuttle services from and to the airport and railway makes it attractive to quickly drop by for just a day.

Even though the Brexit and the uncertainty it brings as one of the main topics, the atmosphere at the show was positive.

When talking about last season, growers seem to have had an average season. Up until the end of May, sales have been really good, but due to several weeks of rain at the beginning of June, sales were hampered. "Without the rains, it would have been an excellent season", an exhibitor said.