The family Syrphidae, commonly called hover flies or flower flies, include some 6,000 living species. As “one of the most abundant groups of flower-visiting insects”, with adults of most species feeding almost exclusively on pollen and nectar or honeydew, these flies are among the most important pollinators, both for wild plants and numerous crops. 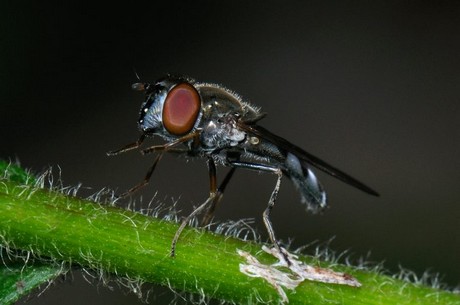 A flower fly in the family Syrphidae: Platycheirus obscurus (female). It was this genus that attracted Dr. Andrew D. Young to the study of Dipterology. He revised this genus for his M.Sc. Photo by Andrew D. Young, taken in Algonquin Park, Ontario Canada.

“Macquart wrote so many early Syrphidae genus and species descriptions that it’s almost impossible to write a syrphid taxonomic paper without referencing this title at some point,” explains Dr. Andrew D. Young. 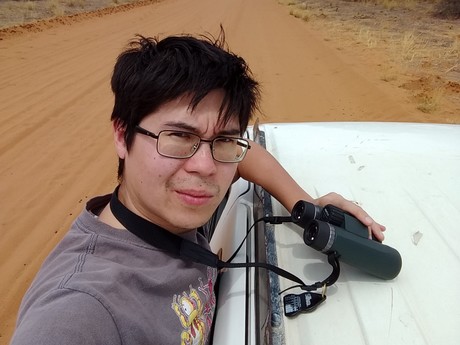 Young is a University of California, Davis postdoc, working out of the California Department of Food and Agriculture Plant Pest Diagnostics Center, where he specializes in Diptera taxonomy and phylogenetics. Although he studies Tephritidae (fruit flies) in his current position, most of Young’s entomological training has been focused on Syrphidae. While Macquart’s monographic series is an essential resource for this group, it’s not easy to come by.

“Each volume is several hundred pages, and was published in the mid 1800s, so hardcopies are not particularly easy to get ahold of,” explains Young. “Most of the time when you do find a hardcopy, it’s one that’s been photocopied so many times it’s barely legible.”

“There are certainly a lot of titles on BHL that have impacted my research, but Macquart’s work is the one I end up referring to the most often,” shares Young. “It would be a difficult work to obtain on my own if BHL did not exist.” 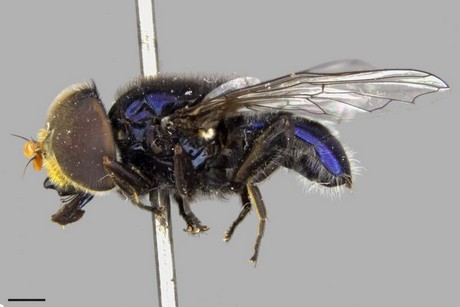 Psilota coerulescens, a species of Australian Psilota (Family: Syrphidae). This species was part of Young’s PhD project, which involved phylogenomic analysis of Syrphidae and related families, as well as a taxonomic revision of the Australian Psilota. This species was previously described by Macquart in 1847, but there are several morphologically similar undescribed species. Easy access to Macquart’s works via BHL helped Young confirm the identity of this species, although photographs of the type material from the Paris museum were also necessary. Photo Courtesy of Andrew D. Young.

Young was drawn to the study of insects during his studies at the University of Guelph. While originally intending to study herpetology, a third year entomology course with Dr. Steve Marshall changed his mind. In 2009, he started his M.Sc. in Marshall’s insect systematics lab at the University, studying Syrphidae.

It was during the first year of his M.Sc. that a fellow graduate student introduced Young to BHL. It was a game-changer.

“BHL gave me faster and easier access to papers I would have otherwise had to wait weeks for and access to many other papers I might not have been able to obtain at all,” lauds Young. 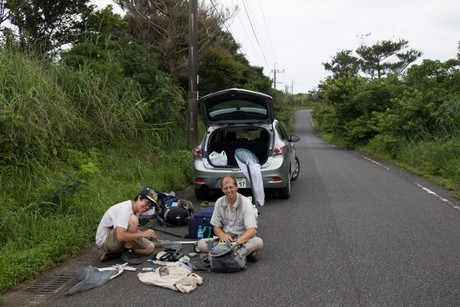 “I often need a single page from a 400+page book, so this saves me a lot of time,” explains Young. “Without the custom download feature, I would be stuck downloading massive PDFs and then extracting pages from them myself.”

By providing open access to so much essential entomological literature, BHL has had a profound impact on Young’s research, as the examination of both original species descriptions and original type material is essential for taxonomic research.

“BHL is often my only recourse for obtaining older taxonomic works. Because of BHL, I have been able to quickly locate original descriptions from early taxonomic authors, allowing me to compare the descriptions to the material I have access to,” explains Young. “BHL is invaluable to my taxonomic research.” 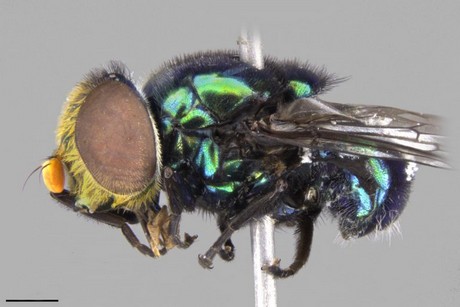 An undescribed species of Psilota (Family: Syrphidae) from Australia, also included as part of Young’s PhD project. He will be naming this species after his partner Aislinn, for all the support they provided him during his academic journey. Photo Courtesy of Andrew D. Young.