Chelsea CAMFED Garden to have new home at Eden

The Campaign for Female Education (CAMFED) African Garden, which won a prestigious gold medal at the RHS Chelsea Flower Show in May, is now being installed at the Eden Project in Cornwall.

The garden tells the story of how the Campaign for Female Education supports the most excluded girls and young women in rural sub-Saharan Africa to go to school, succeed, and become leaders and change-makers in their communities, including in climate-smart agriculture. The garden is due to open in the Mediterranean Biome at Eden on Friday, October 18.

CAMFED’s alumnae, one of whom inspired the garden, are committed to supporting more girls to go to school. They grow food to nourish school communities, create local employment, and help build resilience to climate change.

The garden was created by leading London-based designer Jilayne Rickards, who was inspired by visiting CAMFED in Zimbabwe. At its centre is a classroom surrounded by lush planting, reflecting a huge array of edible crops typical to rural Zimbabwe. A raised bed showcases water-efficient growing technology coupled with crop rotation, which maximises yield from a small area. 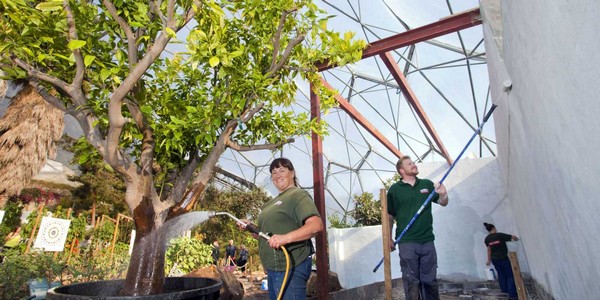 The garden attracted a great deal of attention at Chelsea, not only winning a gold medal but also the coveted BBC/RHS People’s Choice Award in the ‘Space to Grow’ category. It helped launch the international non-profit’s #SeeGrowth campaign, through which CAMFED aims to support thousands more young women to establish climate-smart agricultural businesses.

At Eden, home of the world-famous Biomes, it will be enjoyed by more than one million visitors a year.

Some were grown at the nursery by People and Gardens, which works with people with physical and emotional impairments.

Designer Jilayne was a first-time exhibitor at Chelsea and had no previous experience of creating a show garden.

She said: “It is really inspiring to know that our garden will live on at Eden and be enjoyed by millions of visitors. We hope it will continue to raise awareness about CAMFED’s See Growth campaign.

“It has been empowering to bring two fabulous charities together that do such incredible work.”

Eden Head of Horticulture Paul Stone said: “We share with CAMFED a commitment to sustainable agriculture and education and have been very happy to partner with them on this inspiring garden. We’ll continue to tell this great story when the garden opens at Eden.”

Jilayne’s inspiration for the garden came from meeting Beauty Gombana, a CAMFED alumna from Zimbabwe. Beauty runs her own agricultural business, growing nutrient rich crops and employing local staff. She allows her farm to be used as a learning resource and also funds other girls to go to school.

“This innovative garden showcases the dividends an investment in girls’ education and women’s grassroots leadership can pay - improving community health, wealth and resilience to climate shocks. We are so delighted that it will live on at the Eden Project,” commented Sinikiwe Makove, Head of Programmes at CAMFED Zimbabwe.

The garden will include biofortified food crops developed and delivered by an international science collaboration, HarvestPlus, which receives funding from the UK Government’s Department for International Development (DFID).

Enriched with vitamins, these crops support good nutrition in Africa, especially in mothers and babies. DFID, through UK Aid, is a long-standing investor in CAMFED’s programmes to educate girls and support young women in sub-Saharan Africa into independent livelihoods and leadership positions, including in climate-smart agriculture.