Rising to the challenge of breeding blue flowers

It all started nearly 30 years ago with the desire to introduce a blue-colored rose. It seemed like a mission impossible. Or not? After years of research and overcoming obstacles, Suntory not only managed to create a blue rose (Applause), but also a blue carnation series - the first genetically modified cut flowers in the world - which was created along the road of the blue rose program. Over the years, the demand as well as the acceptance for these GM varieties increased and now, Suntory's blue flowers are more and more on display all over the world. 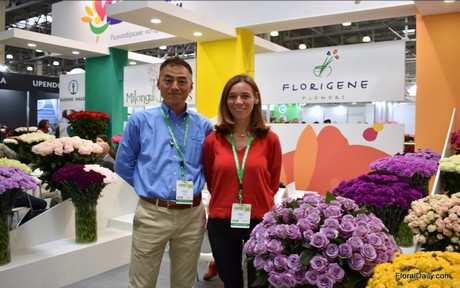 Masashi Matsumura and Monica Useche at the FlowersExpo in Moscow, introducing Applause.

In Russia, for example, where the blue carnation Moonseries has been introduced around a decade ago, and the demand has only increased since then. At the FlowersExpo in September 2019, they introduced the blue rose Applause and are seeing good interest for this variety as well. Now, the breeding company is ready to educate their customers and familiarize them with the history, breeding and growing process of these flowers. Therefore, next week, Dr. Tanaka, who has been in charge of the GM program, will hold presentations in three Russian cities for wholesalers, importers, and florists.

And a breeder isn't a breeder without introducing and enhancing varieties. At the IFTF in Vijfhuizen, which will be held in the first week of November, a new carnation in the Moonseries will be introduced in the Netherlands; namely Moonvista - the darkest variety in the series. Together with other carnation varieties, Moonvista will be on display at the booth of Florigene (booth D5.17).

How it all began

In 1990, the so-called Blue Rose Project started. Together with the Australian venture company Florigene, they decided to tackle this dreamful project. In an extensive article, Suntory explains that there were two technical barriers that had to be solved; one was isolating the genes (blue genes) out of the thousands of genes in blue flowers, and to develop a method to introduce these genes to cells of roses and produce genetically modified roses from these cells.

Blue petunia genes
Many plants produce blue flowers in nature, but after doing research, they decided to opt for a petunia exhibiting a dark violet color. In June 1991, they were able to isolate the blue genes, and Suntory and Florigen immediately applied for the patent of the blue genes.

No hint of blue
Via Agrobacterium - a bacterium that has the ability to carry its own genes into plant cells - they introduced the petunia blue genes to the roses. Unfortunately, when the first rose opened in 1994, it did not show a hint of blue in the rose. Hard times followed for the members involved in the project.

Blue carnations
But the project continued in a slightly different way. The petunia genes did not work well in roses, but they worked as expected in carnations - and the genetically modified blue carnations were born - the first genetically modified flowers in the world that were commercialized. In 1997, these flowers, named Moonseries, were put on sale in Japan and the number of varieties as well as the popularity has increased since then. The flowers are produced in Colombia and Ecuador and are primarily sold in Japan, the US  Europe and Australia.

Blue pansy genes
But what about the roses? The researchers continued their search and in the same year, they isolated blue genes from a pansy and finally observed color changing results in the roses - to dark red. "The rose was still far from being blue, but the production of blue pigments showed them the path to the birth of blue roses."

First blue rose born
Around 1998-1999, the first slightly blueish roses started to bloom. They continued gene transfer and thanks to that effort, roses which accumulated almost 100% of the total blue pigments bloomed. In 2002, they selected the bluest transgenic lines from them, and the first blue roses in the world were born, at last. They succeeded in propagating these roses by grafting, and confirmed that roses of the same color were produced stably and grown normally.

Obtaining the permit - the highest hurdle
In June 2004, they reported their success, and it was picked up by media across the world. The response was huge, but the biggest hurdle that had to be overcome was delivering the blue roses to the consumers, as the blue roses are genetically modified organisms. It was necessary to obtain legal permits and therefore had to conduct various experiments to prove that the production and sales of the developed roses in Japan would not affect the Japanese biological diversity.  It all took 4 years and they received the permits on January 31, 2008.

The production and sales took off and in the meantime, they were obtaining permits for introducing the variety in more countries.

True blue?
Applause is known as the bluest rose variety on the market, but it is still debatable how truly blue the color is. “Some customers found it not really blue, more lavender”, Mario Vicente, General Manager at Fresca Farms, who’s been supplying Applause for over two years now in the US told us in an article last year. He agrees that it is not a true blue rose yet. “But if you compare it with other lavender roses, you can see that the others have more pink in it. Applause is a rose that has the Campanula (or bell flower) blue gene in it and this creates that blue-violet color.”

In order to make the color more true blue, the Suntory team are continuing research in Japan and they hope to provide bluer roses in a few years.

Diversify assortment
Even though Applause is not a true blue rose yet, interest is high. “People are looking for different things, and Applause is such an item that can really diversify one’s assortment from the rest”, Vicente said. And also in other countries, like Russia, where Applause has been introduced in September, during the FlowersExpo in Moscow, it received a lot of attention.

And to get the importers, wholesalers and florists more familiar with this 'new' product, Suntory decided to organize presentations in Moscow, St Petersburg and Kazan. "In this way, we try to show what's behind the breeding and growing process and how the quality matches the product's price."