The fourth edition of Flower Logistics Africa had a full house representing a cross-section of the entire value chain of flower trade. Revolving around the core theme of “Making Flower Trade Sustainable: Economically, Environmentally and Digitally”, the event was held at the Radisson Blu Hotel in Nairobi and attracted participation from Africa and outside.

Cargolite was also participating in the FLA and PLA conference in Nairobi and John Kowarsky sent us some pictures of the event.

The participants of the day-long conference deliberated on the typical challenges and changes faced in the floriculture industry as a whole, which is the fastest growing sub-sector among Kenyan exports, with annual growth of more than 7 percent. The discussions delved into flower trade sustainable practices in the changing economy, Kenya’s preparedness for big exports & new markets, and packaging innovations in flower transport. 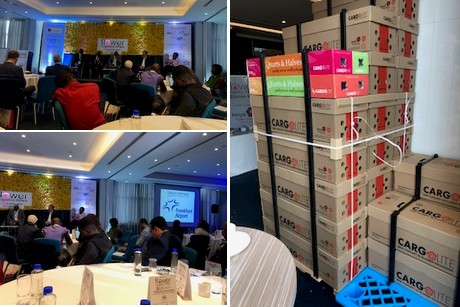 In July 2019, African leaders from 54 countries signed the African Continental Free Trade Agreement (AfCFTA), the world’s largest free trade area by the number of countries. While speaking on the impact of the implementation of AfCFTA on African flower trade, Clement Tulezi, the CEO of Kenya Flower Council (KFC), mentioned that for a long time, Kenya has over-relied on the European market. “I believe that we can diversify into other markets and become competitive even if we have other people who are present in those markets. We believe in the quality of our produce, and with better promotion and entry into those markets, we are able to make headways,” he said.