Photo report of the festive day

Morel is celebrating its 100th anniversary this year and yesterday, they celebrated this centennial of breeding and selecting big by opening their new trials facility in Frejus, France. In the attendance of over 200 customers, growers and friends (out of 19 countries), owners Guy, Paul-Henri and Olivier festively opened the new 5,372 m² plastic greenhouse (closed + opened part - 3,700 m² is the opened part), intended for trialing new varieties. Afterwards, conferences were organized and the day was closed with a Gala Evening in a winery.

FloralDaily.com was also present to share an impression of the day.

Click here for the photo report of the gala. 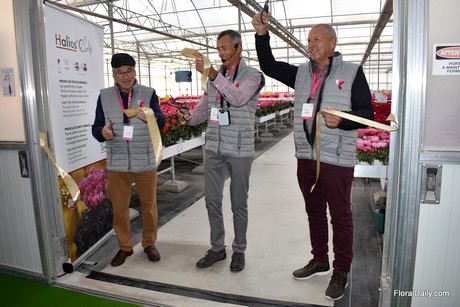 History
Olivier Morel welcomes everyone and tells the audience a little more about the history of this French cyclamen breeding company.

"This collective adventure first sets down its roots near Lyon in 1919 where Pierre Morel developed the breeding of tetraploid cyclamen which was already a success at exhibitions in 1930", he says.

After World War 2, Charles opened his business in Golfe-Jean (near Cannes) and continued the breeding. In the 1960's, a new type of diploid plant was developed - the one that would be used as the base plant for creating their first F1 hybrids. In 1970, 50 years ago, Pierre, Jean-Charles and Jacques (Olivier's brothers) bought the site in Frejus and built their first premises. 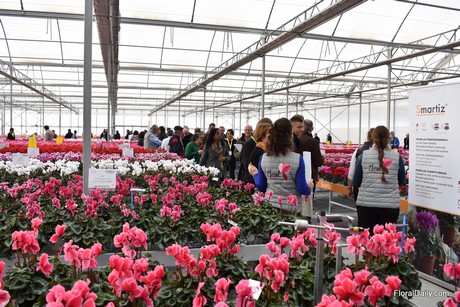 A peek in the greenhouse. For more pictures, click here.

In 1976, Guy, an ENITH graduate engineer, launched the research programme for the F1 hybrids. Paul-Henri also joined the company as product manager, followed by Olivier, who joined them one year later to manage the commercial side of the business. 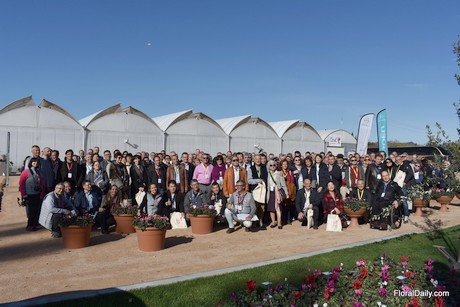 The international group of guests visiting the new greenhouse.

"During these years of research, until 1989 and our first sales of Halios, Cheops and Latinia, the company worked incredibly hard for this ambitious research program. Then, we enjoyed fantastic development in more than 70 countries where the qualities of our F1 hybrids were recognized and appreciated by both growers and consumers."

Olivier also proudly mentioned that their cyclamen collection was awarded with the CCVS label (Conservatoire des Collections Végétales Spécialisées) for its diversity and sustained gene pool. 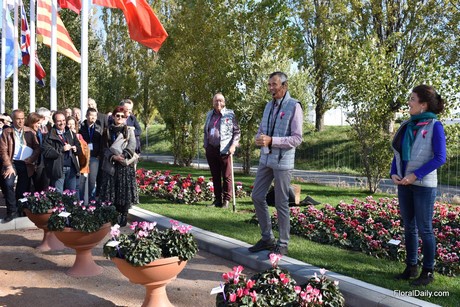 Outside, three trees were planted (one for every brother).

New Greenhouse - 5,400m2
On the first premises, they have 27,000m2 of greenhouses and this new one covers 5,400m2. It required over 1 million euro of investment. Morel decided to build this plastic greenhouse (supplied by Vermako) to meet several objectives. Firstly, providing a larger area for comparing experimental varieties in one same climate (before, the trials were in 3 different greenhouses). Secondly, creating a structure that facilitates visits to evaluate their varieties. Finally, win extra space in their old premises to increase seed production and new breeding.

"We wanted to invest for a specific reason: to encourage real developments and stay in line with the market and the growers' realities", says Olivier Morel. 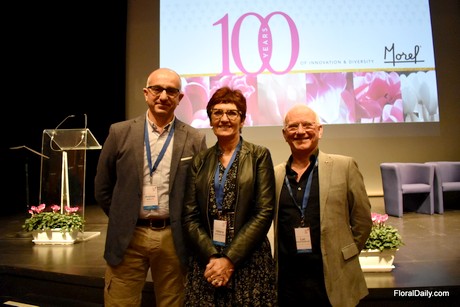 Also a conference was held after the opening of the greenhouse. The speakers are, from left to right: Andrea Minuto, Hélène Lafourcade and Luc Behar-Bannelier

100% "Made in France"
Olivier also highlighted the fact that all their production takes place in Frejus. "We are proud that our company is 100% "Made in France". Currently, the number of F1 hybrids they have created and sold exceeds the 350 varieties - and in the pipeline, they are working on more robust plants, new series and shapes. From the beginning, they have sold over 2,000,000,000 F1 hybrid seeds in more than 70 countries.