“You have to look at it this way. It is not a machine that shoots out the bad bulbs, it is a relief of labor. We can just have a lot more capacity with a lot less people. That’s where the big profit is."

Peter Lommerse from Nord Lommerse in Hillegom is speaking. The company is, with an annual production of nearly 300 million bulbs, one of the biggest companies in the international breeding trade. The bulbs are delivered from the beginning of August to the end of October and to ensure that all deviating or fusarium-affected bulbs are filtered out before dispatch, they all go through the BulbStar once. This machine is mounted in the sorting line and it x-rays all bulbs, as many as 30 to 40 thousand pieces per hour. Peter started with one machine 12 years ago, and now there are five with a sixth one in the works. 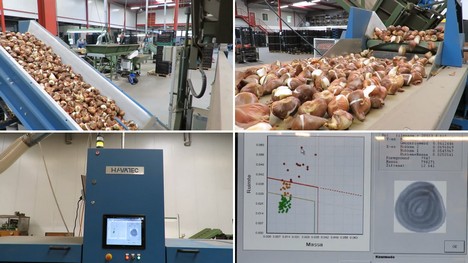 Above, the bulbs are transported over the conveyor belt to the BulbStar. They are scanned there, which results in a picture like the one at the bottom right.

The BulbStar selects around 80% of the healthy bulbs. So only 20% remains which have to be checked and re-checked by workers. “Of course, up to 90 or even 100 percent would be fantastic, but that is up to the Havatec technicians. However, the accuracy, speed and reliability of the machine have continued to improve in recent years, so much so that in practice we hardly can do without it."

Double deployable
However, an issue is profitability. At Nord Lommerse they only run for three months and not even all at once. The peak is in September, when the bulk is made ‘export ready’. Before and after that, the production increases and decreases again.

Fortunately, however, there is another application for the machine: in the planting line of the water forcing. "The forcing is usually planned from November to March," Peter explains. “Because hygiene standards have risen and because of disease and/or fusarium pressure people prefer not to touch the bulbs before planting, the BulbStar can also scan the bulbs once more. That means less contact and it relieves the planters." 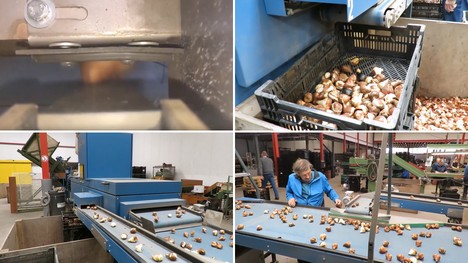 A rocker ejects most of the sour bulbs; the doubted bulbs are returned over a separate belt and are re-assessed by a skilled eye.

Lommerse does not force itself, but 12 years ago they entered with exactly this approach. “We had purchased a BBX machine, the forerunner of the current BulbStar, together with a forcer. This already worked with the same technology, but mechanically it was completely different and the software has been developed considerably since then. The intention was that we would use it for selection during the export season, and that he would then use it for pinning. But that didn't work. The machine had too little capacity and dismantling and relocating elsewhere was quite an undertaking. The current BulbStar is much more reliable and also relatively easy to move."

Although testing for fusarium is becoming more and more common at the forcer’, this dual application is by no means standard. Sharing is also not always a logical consequence of the purchase, Peter knows, because there are enough to keep it solely for himself. However, if people would like to collaborate, Lommerse is interested.

Necessity
The exporting producer has been scaling up more and more in recent years. Continued automation was therefore crucial, but finding extra hands is becoming increasingly difficult. “Personnel is an issue, the shortage is becoming more acute and moreover seasonal work is becoming more and more expensive. A new scheme (WAB) will start next year and the costs of seasonal work will increase by at least 10 percent. Machines work constantly and besides, during the peak we also work in two shifts, so that work continues from 6 in the morning to 10 in the evening. You even would want to work through the night, so to speak, but then all supply and removal would also have to continue. That would be such a burden on your permanent employees, so at least for now we’re not considering that.”

Finally, Havatec has acquired a good position in this niche. There are actually no competing machines and in case someone would like to produce such a machine, it would not be that easy at all. “What they do well is to involve the entrepreneur from A to Z in the development of their own machine. We have also been involved with every update."

Want to see the actual machine? Then pay a visit this month to the Stichting Mechanisatie Tentoonstelling Bollenstreek (stand number 2C01) and/or to the Tulip Trade Event in March, where Havatec will present one.