Dutch exporters of flowers and plants ensured that 2019 will go into the books as a new record year with an export value of € 6.2 billion. The export value of pot plants grew by 4.3% slightly more than that of cut flowers, which grew by 3.6%, according to Floridata's statistics. "This is a tremendous achievement for exporters," says VGB director Matthijs Mesken. Mainly the growth in export to Eastern European countries and further spread of sales destinations contribute to the export record. Exporters have a positive, curious view of 2020 and are once again counting on slight growth, reports the VGB. 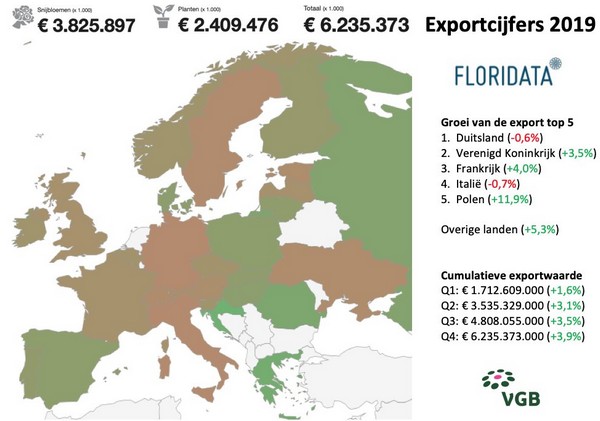 Finally another good December month
December saw the strongest monthly growth since 2013; export value rose by 10.3% to € 472 million. "Only two negatives can be found in the month December in the export countries top 30 of cut flowers and pot plants," says manager Wesley van den Berg of Floridata. Exports of cut flowers rose by 10.9% to € 312 million, faster than pot and garden plants which grew by 9.2% to € 160 million. The mild winter weather and an extra trading day contribute to the big plus.

Poland expels Belgium from fifth place
The year 2019 did not start off flying immediately. Exports to Germany and Italy were both disappointing, but became noticeably better as the year progressed. Germany contracted by 0.6% to € 1.67 billion, but remains undeniably in the first position. Italy comes fourth with a contraction of 0.7% to € 301 million. "The lion's share of the growth happened in the second half of the year, with Poland as the largest grower in 2019," adds Wesley van den Berg. "This will put Poland in the top 5 and bring Belgium back to sixth place," Matthijs Mesken continues. Sales to Eastern European countries also continued to grow, including Russia, which is gaining ground and is in 7th place. Despite the Brexit perils last year, the export value to the United Kingdom grew by 3.5% to € 855 million. The share of total exports in the changing top 5 countries dropped by 2% again in 2019, which underscores the further spread to sales destinations.

Positive outlook for 2020
Mesken looks at 2020 with a positive and curious outlook. "On the one hand, there are enormous opportunities for the Dutch floriculture sector in the field of accelerated digitization and sustainability. On the other hand, there are also concerns about increasing phytosanitary requirements and administrative burdens, for example as a result of renewed plant passport regulations. Trade conflicts are also lurking, the effects of which can quickly be seen in the monthly statistics we keep up to date," adds Van den Berg. "The Brexit is expected to have little impact on sales to the United Kingdom in 2020. It is still unclear what the trade relationship with the United Kingdom will look like in 2021. Exporters have done a great job in 2019. All in all, we expect slight growth again in 2020," says Mesken of the VGB.