Italian horticulture industry on its way up again

After a decade of decline, the Italian horticulture industry is on its way up again. The value of the production of flowers and plants in Italy again has grown, for the second year in a row and the export reached record numbers. For this reason the Myplant & Garden receives increasingly more interest from official delegations of buyers from around the world. "This year, 200 delegations of buyers from Europe, Asia, North America, the Middle East, Africa and Australia are attending the fair to learn about the quality of the Italian Products", the organizers of Myplant & Garden informed us. 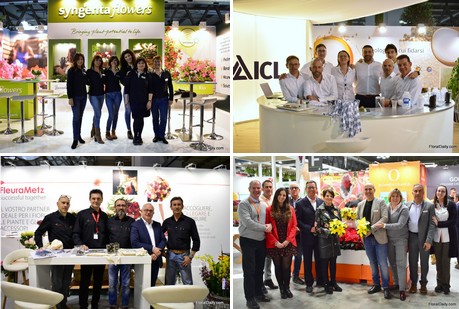 Clockwise: The team of Syngenta Flower, the team of ICL, the team of FleuraMetz and the team of Dümmen Orange at the Myplant & Garden 2019. Eager to see the complete photo report, click here.

Horticultural statistics - Italy
In 2018, the value of the production of flowers and plants in Italy was estimated at 2.57 billion Euro (+1%); for the second year in a row, an increase.

Export, - which is fundamental for the development of the sector, say the Myplant organizers - has reached record numbers: “Italian horticulture is a core interest of global markets”. Italian products are exported on a larger scale: “Export had a growth of 7.6% in a year. It has reached the record sum of 884 million Euro, 706 of which of Italian products only, which in turn register a positive growth of 9.3% if compared to the previous year.” The positive trend translates into an active balance of 306 million Euro in the trade balance.

Horticulture around the world
But what about the horticultural statistics for the rest of the world? In 2018 horticulture production on a global level reached 65 billion Euro. The value of the production of flowers and ornamental plants (which includes cut flowers, foliage, pot plants and perennials) has been 35.5 billion Euro: 11 billions in Europe, 7.5 in China, 4.4 in the USA.

Almost thirty (29) billion Euro is the value of nursery plants in the whole world. That of bulbs, instead, has been estimated with 121 million Euro. The majority of flowers and ornamental plants nowadays is produced in Europe, where it is estimated that in 2018 the total value of production – including bulbs and nursery plants – was equal to 22 billion Euro. 28% of the total was generated in The Netherlands (cut flowers, pot plants, bulbs, annual and perennial plants), 16% in Germany (nurseries and garden plants), 14% in Spain and 12% in Italy (flowers and pot plants).

The surface dedicated to the cultivation of flowers and ornamental plants in Europe is close to 82,000 hectares, 77% of which in the open and the rest in greenhouses. Italy only covers almost 7,500 hectares. If The Netherlands, Japan and the USA remain at the top of the global rankings for flower productions, the markets forecast a significant growth in the production in Asia, Africa and Latin America. The forecast is that global horticulture production will grow between 5 and 6% within a decade. A growth in production of pot plants and cut flowers is expected, primarily because of the growth in the demand for fragrances and products for personal hygiene. Moreover, sensibility towards environmental issues will result in a change in the traditional cultivating techniques, that will shift towards more environmental-friendly systems and the use of organic fertilizers.

Myplant & Garden
This year, the sixth edition of the Myplant & Garden will be held from February 26-28 at the Fiera Milano Rho in Milan, Italy. Eager to get an impression of the show? Check out the photo report that FloralDaily.com made in 2019.