Foliar nematode: Angular leaf spots can be confusing to diagnose

Angular (vein-delimited) leaf spots on ornamental plants are often attributed to bacterial pathogens. However, multiple different pathogens can cause similar-looking leaf spots including fungi, downy mildews, and foliar nematodes. Diagnosis can sometimes be confusing (see Figures 6, 7, and 8). This was the case for a recently submitted plant sample. The sample consisted of two Abelia cultivars with symptoms of leaf spotting and defoliation (Figures 1 and 2). At first glance, the leaf spots were vein-delimited and yellow to reddish-brown in color. When the spotted leaves were examined under the dissecting microscope, no fungal fruiting bodies or sporulation was seen, which ruled out a fungal or downy mildew causal agent. The leaf spots ranged in color from light to dark in a color gradient, which is not typical for bacterial leaf spots, but it is a common characteristic of foliar nematode infestation.

To determine if the leaf spotting was due to foliar nematode, the easiest way to check for the microscopic “worms” is to chop symptomatic leaves in a watch-glass or petri dish of water and examine the floating leaf pieces and water for nematodes swimming in an eel-like fashion from the cut leaf pieces using a dissecting microscope. When the sample with obvious, darker leaf spots (Figure 1) was observed, only a few nematodes were seen. However, when the second sample with lighter yellow and less obvious spots (Figure 2) were cut and examined, a huge number of nematodes were released into the water (Figure 3). As a plant pathologist, foliar nematodes are one of my favorite pathogens. However, as a grower, foliar nematodes can cause a huge headache.

Foliar nematodes are microscopic roundworms in the genus, Aphelenchoides. The species most commonly found on ornamental plants in the southeastern USA is A. fragariae. Foliar nematodes have been an increasing problem in ornamental plant production in recent years. Leaf spot symptoms are often mistaken for other diseases. Because control measures for most other diseases are ineffective against foliar nematodes, misdiagnosis can lead to the development of heavy infestations. Vegetative propagation of woody and herbaceous plant species and cultivars can introduce the nematode into propagation and production houses. Foliar nematodes also have a very wide host range, which means that an infestation can spread through a greenhouse, nursery, or landscape, even across a diverse array of unrelated plants. Foliar nematodes have been found in over 700 different plant species from at least 85 plant families. In ornamental production, they mostly affect herbaceous plants such as anemone, begonia, carnation, chrysanthemum, dahlia, fern, gloxinia, helleborus, hosta, impatiens, lamium, lantana, ligularia, peony, phlox, salvia, and verbena, as well as woody plants such as abelia and Buddleja. 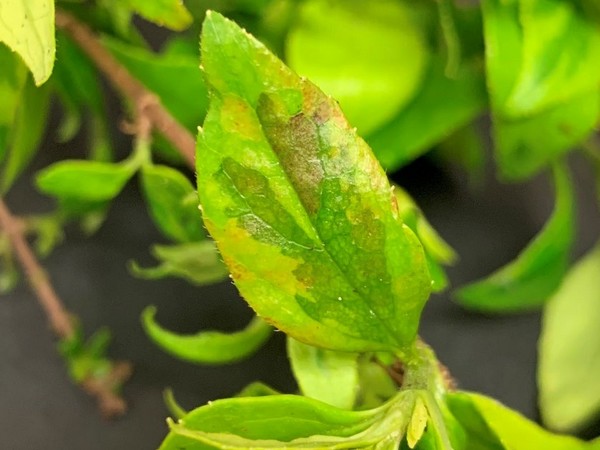 Figure 2: Light yellow to brown leaf spots that are somewhat vein-delimited on a variegated Abelia cultivar. Leaf spots were not easily seen on the variegated cultivar. Affected leaves readily drop from the plant.

Symptoms of foliar nematode infestation can vary, depending on the plant species. Lesions on leaves are vein-delimited, yellow to purplish brown, and often have a color gradient from light to dark (Figure 4). In plants with net-venation, lesions are angular and tend to form a patchwork pattern, while in plants with parallel veins, such as hosta, the lesions appear striped. Stunting and defoliation are also common. Symptoms are not apparent until nematode populations reach a high enough level for their feeding damage to become visible; this may take several weeks after initial infection. Once symptoms are observed on some leaves, it is very likely that other leaves on the same plant or surrounding plants are also infected and just not showing symptoms yet. Nematode populations fluctuate over time. In fact, when leaf symptoms are very obvious (darkly colored areas), nematode populations may be very low because the damage is done and their food source is depleted. Higher nematode populations are often in the tissues just beginning to show symptoms (light colored areas), which can often be overlooked. 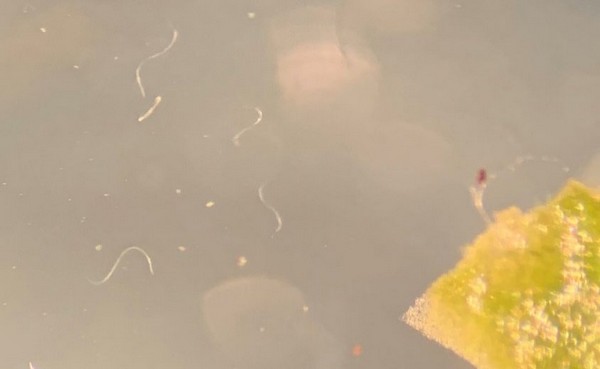 Figure 3: Foliar nematodes freely swim from a chopped piece of symptomatic Abelia leaves. Four microscopic, S-shaped nematodes can be seen to the left of the leaf piece.

Disease management
Management of foliar nematodes is difficult. There are no registered nematicides for use on ornamental plants. Insecticides have been evaluated for nematode control; however, the products are mostly ineffective (Lan and Palmer, 2017). 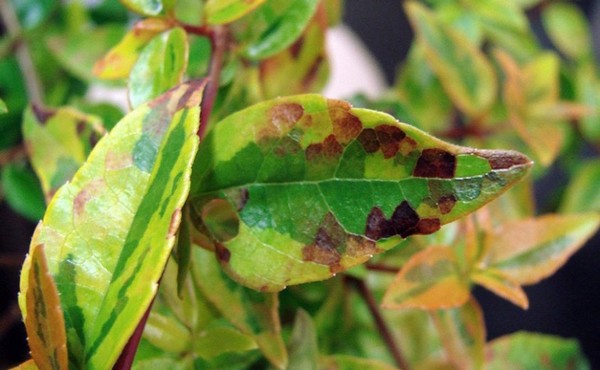 Because nematodes are essentially aquatic animals, many of the management recommendations for foliar nematodes center around water management. Foliar nematodes can swim in films of water from rain, dew, or irrigation. When plants are closely spaced with overlapping canopies, the nematodes can move from plant to plant as they swim across leaf surfaces. Water splash from overhead irrigation or rainfall can very quickly move foliar nematodes from one plant to another across distances they could not cross on their own. Anything that reduces leaf wetness can slow the movement of foliar nematodes and may also decrease their survival. 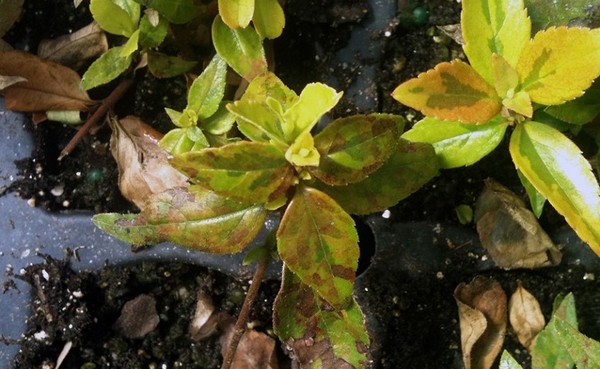 Sanitation is also a key factor in managing foliar nematodes. Infected leaves frequently drop from plants, carrying thousands of nematodes with them (Figure 5). If these leaves fall on or near other plants, the nematodes will easily move out of the dead leaf tissue and into the new host. The nematode can also survive within dried leaves for longer periods of time. When the leaves re-wet, the nematode can “come back to life” again. This can make management very difficult in propagation houses. 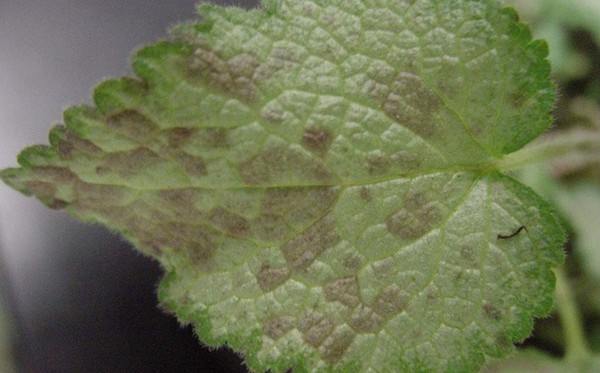 Figure 6: Downy mildew on Lamiumhas purplish, angular, vein-delimited leaf spots that are light colored and all about the same color. Downy mildew sporulation may also be seen on the underside of the leaf below the leaf spots. 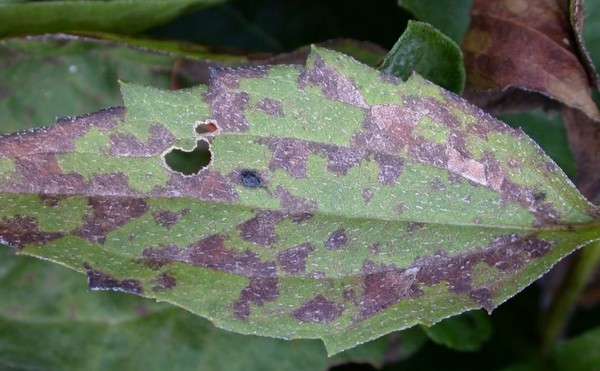 Figure 7: Septoria (fungal) leaf spot on Rudbeckia has purplish to brown, angular leaf spots that are all the same color and darkly colored, pimple-like fruiting bodies (pycnidia) can be seen embedded in the leaf epidermis. 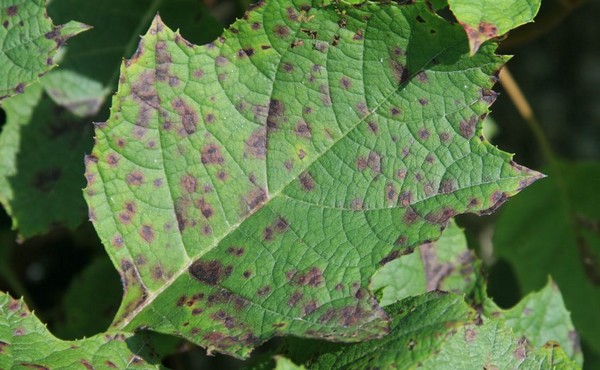 Figure 8: Bacterial leaf spot on oakleaf hydrangea has purplish-red leaf spots that are oily-looking, may have a reddish or yellow halo, and are all the same color intensity. No sporulation would be seen within the center of the leaf spots.