A Hill and Sons

At the beginning of the Roaring Twenties, 1920 was ground-breaking in many ways: Middlesbrough won the Northern Victory League,  Rupert Bear first appeared in the Daily Express and The Crown on Linthorpe Road in Middlesbrough originally opened as a cinema. And in a small corner of Loftus between Saltburn-by-the-Sea and the North York Moors, a keen grower was taking his first steps on his journey to nurseryman by growing flowers and vegetables on his allotment and selling it to local markets. 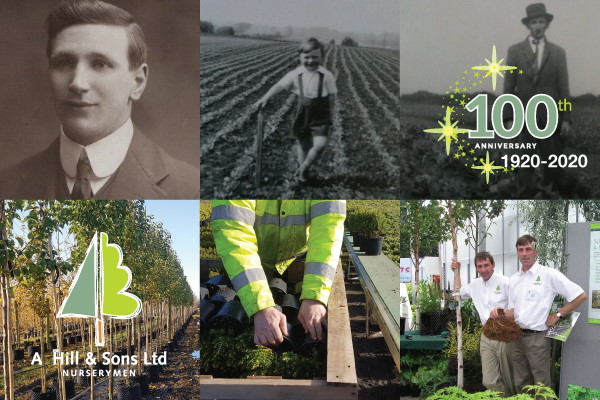 Celebrating a centenary in growing
This man was Alan Hill and in 1920, A Hill (Nurseryman) became a reality.  Fast forward one hundred years and the thriving 35-acre production nursery now operates out of its neighbouring site in Stokesley. What’s more, there are still Hills at the helm – third and fourth generations of the family: David and his two sons Julian and Simon.
Steadfast and professional for over 100 years
A Hill and Sons has, quite literally, blossomed from its infancy growing and selling flowers and vegetables, through a period of strawberry and cut flower production to its latter-day focus on young plants, shrubs and container-grown and field-grown trees. David Hill, grandson of the founder Alan, took over the reins at Hills in 1976, steering the business on its present course as a limited company and supplier of trees, shrubs and hedging for large planting and landscaping schemes across the North East and often further afield. With his wife Marianne at his side and his two sons now driving the business forward, David speaks proudly of the company’s long-standing reputation which not only holds fast but will take the business into its second century with great promise. “Not faltering for over 100 years, our customer’s expect, demand and receive the best a nursery could offer: a well-planned range of plants and trees, in number, variety and size to suit the ever-changing landscaping marketplace.”
Fourth Generation family-run business
Fourth Generation Hills Julian and Simon joined the company after both had experienced a world outside nursery production. Both returned to the fold in the 1990s after having successfully qualified in horticultural and agricultural management and bringing with them new perspectives, ideas and innovation to take the business onwards.
A bright future
From its modernised under-glass production, automated irrigation systems and a brand-new tunnel expansion in 2019, the Hills family and company stride forward in this most traditional and historic of professions. The business employs 20 staff across the seasons at their Stokesley nursery and supplies trees and shrubs to commercial, domestic and public gardens and landscaping projects across the region, as well as trading with UK wholesale nurseries across the country.

“Supply chain, stock and batch management and communication are the main focal points of our immediate plans for Hills” outlines Simon Hill, who manages the day-to-day operations and commercial functions. “Landscapers demand last-minute stock availability, often in large numbers and across varieties and that’s where we’re at our strongest. We propagate our own plants and plan our production to meet demands. This allows the greatest flexibility for our customers – something we’re told regularly keeps us as their go-to plant supplier.  Something of a 100-year tradition for us!”
Community support and business development plans
A Hill and Sons are currently supporting Middlesbrough Council in their quest to plant 10,000 trees across the region as part of the Forestry Commission’s Urban Tree Challenge.  A new multi-span tunnel is also nearing completion, ready for increased production capacity and range as shrub potting starts. Hills are also working closely with a local educational organisation to develop new technologies that it is hoped will revolutionise the horticultural supply chain, streamlining collaboration and communication across the marketplace.
For more information: