"not the glasshouse, but the plant is the tool for a perfect climate"

The subtle art of making climate

What does it take to be a good grower? A grower needs to do 100 things right all the time. If one parameter is out of bounds, the energy spent on optimizing the other 99 was all for nothing. There are rules of thumb, guidelines and all kind of figures so growers know what boundaries to manage important parameters within, but there is one aspect of growing that overrules all guidelines and that is making a climate.

Creating a climate puts the grower in the position of a symphony conductor. The grower conducts a multitude of glasshouse instruments into a climate in which the plants can optimize the amount of sugar production. No wonder AI technology is interested in taking over this part of the grower, according to Godfrey Dol, sharing his knowledge about growing in semi-closed glasshouses and taking part in the Autonomous Greenhouse Challenge.

What is 'making a climate'?
There are optimum parameters for growth in a glasshouse. The speed of photosynthesis increases at a higher temperature. The quality of pollination imposes an upper temperature limit. Low humidity can make a plant vegetative, and high humidity can create disease problems.

In figure 1 below, the optimum temperature and humidity are highlighted within red lines. It shows that growers have very narrow margins to work within. It doesn't mean we cannot grow outside of those parameters. However, it increases the risk of something going wrong that limits the yield. The highlighted area suggests the optimum yield with the lowest risk.

The most important control a grower has over both temperature and humidity is air exchange. In a conventional glasshouse, air exchange is controlled through vent position. When outside temperatures are cool, reducing the air exchange allows the temperature to rise and the humidity to increase. In this way, the optimum values in Table 1 can be realized.

However, it can be very tricky to achieve the right temperature and humidity. Wind speed and wind direction play an important role, and no two days are the same when it comes to weather. While the climate computer can be set to maintain a desired temperature in the glasshouse, in reality, few growers work this way. 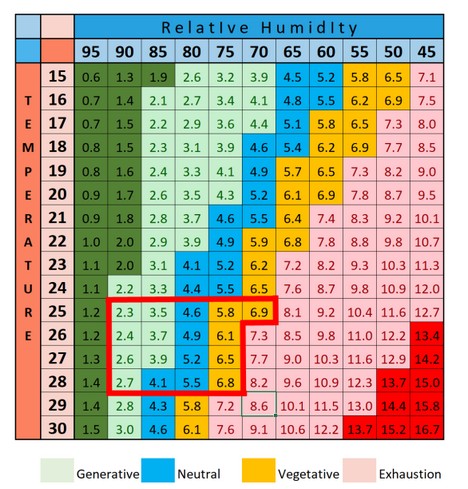 However, in this situation, the end justifies the means. If we have a look at the temperature graph in figure 2, we can see that the vents (brown and yellow line in the graph) open and close too much. While the temperature (red and blue line) seem consistent enough, the climate in the glasshouse constantly switches from cold to muggy. Note that the temperature follows the calculated ventilation (brown line) 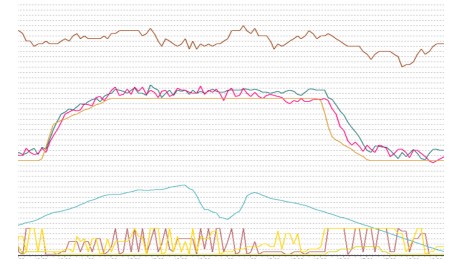 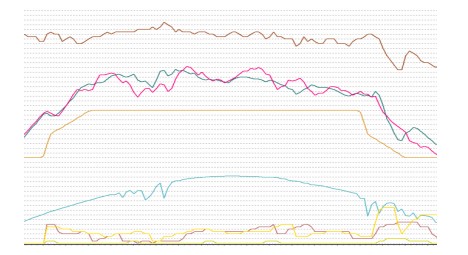 Aside from achieving near-perfect humidity and temperature, squeezing the vents also helps increase the CO2 levels. Combining sufficient light, CO2, and the right temperature and humidity ensures the maximum production of assimilates. This type of strategy always deserves the right of way over vegetative and generative impulses. When a crop has a thin head, it is tempting to lower the 24-hour temperature, for a vegetative action. However, if lowering the temperature results in more venting and lower humidity, it results in less assimilate production. Maintaining the sweet spot allows for better growth, and the result is that the plant has a stronger head than what the 24-hour temperature suggests.

Air movement in semi-closed glasshouse
Godfrey wants growers to consider how to use the above information in a semi-closed glasshouse. The parameters for optimal assimilate production do not change. However, to reduce the air exchange, the fan speed needs to be lowered. Squeezing the vents in a conventional glasshouse through P-bands is a daily, sometimes hourly challenge when the wind speed and direction change.

In a semi-closed glasshouse, the outside wind speed and direction hardly matter. The grower is in control of the air movement in the glasshouse. The fan speed needs to be turned down to the absolute minimum to increase the temperature and the humidity to find the all-important sweet spot of the crop where it is transpiring comfortably and making the maximum amount of sugars.

Mini air conditioner
Furthermore, the air is blown into the glasshouse from the bottom. The heads remain warm. In a semi-closed glasshouse, it is easier to allow small amounts of cold air to enter the glasshouse.

When the weather turns warm and dry, the vents still have to be opened with caution in a conventional glasshouse. Each plant can be considered as a mini air conditioner. A plant can evaporate up to 1 liter per square meter per hour. Put a few hundred thousand of them together, and this represents an impressive amount of cooling power.

If you turn on air-conditioning in your house, you close the doors and windows because if you don't, the cooling effect is negated by the warm air coming in from outside. By squeezing the vents in a conventional glasshouse, or lowering the fan speed in a semi-closed glasshouse, growers do the same. Growers use the cooling power of the plant. The air exchange controls are used to remove just enough moisture to keep transpiration going, but not too far open to allow large amounts of warm air to enter.

High-pressure fogging
Now compare a semi-closed glasshouse with a conventional glasshouse with high pressure fogging. Fogging is an excellent way to help cool and humidify a conventional glasshouse and keep the climate in the sweet spot. However, the air is almost instantly saturated with moisture the moment the fogging is turned on. There is a delay in the humidity measurement, which can delay the turning off of the fogging system.

Using the plants
In a semi-closed glasshouse system, the air is humidified and cooled before entering the glasshouse. Then it passes by the plant where it picks up more moisture produced by the plant. Since the air is already cooled, the air exchange is reduced, helping to maintain high humidity inside the glasshouse when the weather outside is hot and dry. The plant is asked to add moisture to the already cooled and moistened air. It results in a more even transpiration pattern compared to the use of a fog system in a conventional glasshouse.