Many growers are often looking for new countries to export their products to, but what if the market in your own country is large enough and still growing? In this article, we're talking about Brazil. With its 210 million inhabitants, it is a very large market and over the years, the ornamental industry has already grown significantly in this country. But there is still plenty of opportunity to exploit it even further. The auction in Holambra - also known as the capital of flowers, for example shows an annual double-digit growth for over the last 10 years and supermarkets are increasingly investing more in their floral departments. This is explained by Jerry van der Spek of ADFonline an online wholesaler of plants and flowers for the Brazilian retail. 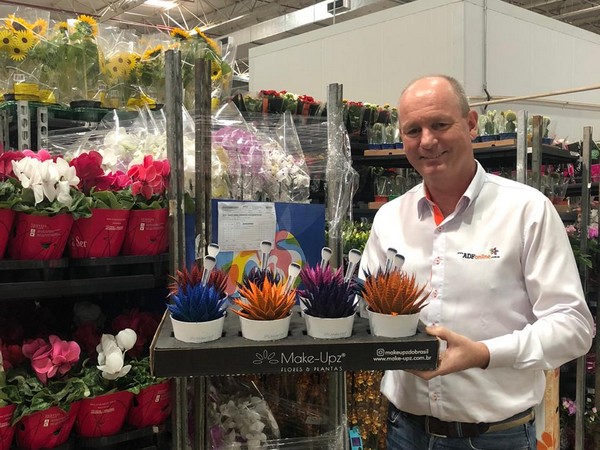 Ornamental industry in Brazil
Before showing the opportunities, let's take a look at the ornamental industry in Brazil. In the 70s and 80s, the ornamental industry arose and at the end of the 80s, the first auction was established in Holambra. In 2009, they established a new complex and now, they have 3 clocks, digital platforms as well as Auction presales. And more ornamental traders and associations established in Holambra over the years, creating an important flower hub. Of all flowers and plants sold in Brazil, 45 to 50 percent of them go via Holambra to their point of sales destination. This city is therefore also called the Capital of Flowers and as the domestic demand is so high, nearly all flowers and plants remain within the country, explains van der Spek.

Over the years, the production as well as the demand for flowers increased in the country. "Now, almost all breeders are represented in the country and when looking at the Holombra auction, they have grown by over 10 percent per year, for over the last 10 years."

The most popular products being sold through the auction are the flowering plants, with the phalaenopsis on number 1, followed by the Kalanchoe, Chrysanthenum, Saint Paulia and Anthurium. About 20 years ago a new cooperation started in Holambra, called Cooperflora, with main focus on cut flower sales. During the past 5 years, also Veiling Holambra is pushing hard to get cut flowers into the retail stores.

Over the years, the demand for plants has grown and the increasing offer of plants in the supermarkets seems to play a large role. "About 16 years ago, the Holombra auction started to focus more on supermarkets and since then, we also see that supermarkets are investing more in their floral departments." 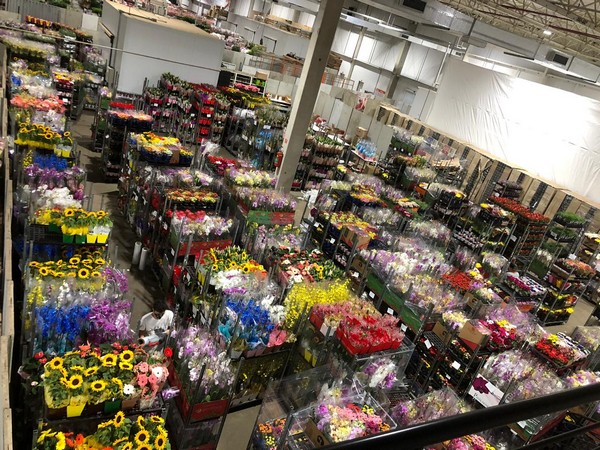 The large assortment of ADFonline at their facility in Holambra

ADFonline
Supermarket chains are one of the main clients of ADFonline, the company that Van der Spek started 5 years ago. But how did it all start? Van der Spek was born and raised in the Westland, the Netherlands and emigrated to Brazil 30 years ago, where he started to work for a Dutch grower in Holambra, in 1990. He worked there for 3 years and continued his career at Dutch chrysanthemum breeder Dekker Chrysanten, where he was the general manager for Brazil. In 2006 the South America HQ of Dekker moved to Bolivia. Van der Spek also moved to Bolivia, but as he missed Brazil, he decided to move back, started to work part time for Schoneveld as representative South America and at the same time started up his own company. He started supplying flowers B2C, through the internet by a webshop, but quickly encountered the logistical challenges in the country and saw better opportunities in B2B. In 2015, he requested temperature controlled space at the Veiling Holambra and set up ADFonline, an online platform, purchased from Holland, Match-online, through which he supplies supermarket chains as well as garden centers, home centers and pet shops. “Nowadays we deliver to 10-12 retail chains once or twice a week” 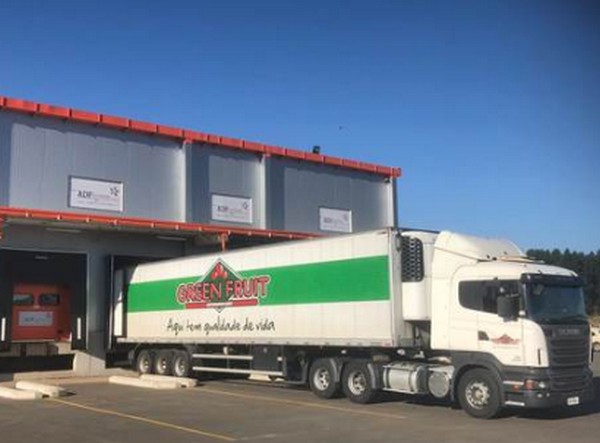 Temperature controlled box, docks and transport to maintain the cool chain until the stores.

"We focus on the chains with mid-sized shops, with 20-25 check outs." And besides supplying the product, he tries to make things as easy as possible for his clients. "We go further than just sale and deliver, we offer category management to enable them to increase their sales volumes. Together with our clients, we try to track down the profiles of the stores to adjust the right mix for the right store. We, for example, want to work with a florist in the store and advise supermarkets to make one of their workers responsible for the floral department, just like the backer in the bakery department and the butcher in the butcher shop. Then, we also offer trainings to these workers. They will take care of the product and help the consumer. As a result, we see that supermarkets have less waste and increased sales, so a win-win situation." 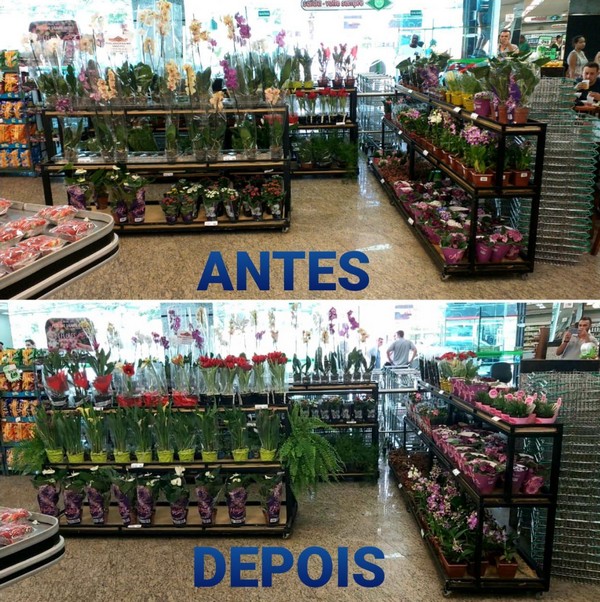 Attractive shelves stimulate sales and ADFonline offers trainings to the people in charge to create these shelves. "The shelves are 'built up' by using a "construction concept" that is based on price, height, color and promotions. See the before (antes) and after (depois) pictures.

On top of that, there is also potential to grow in the cut flower segment. "This part is currently underdeveloped. The flowering plants are the products that are mainly sold, but we have high hopes for the bouquet industry to get a good foothold in the country. Now, cut flowers are mostly used for large events in this country, but the private consumption is still low." And according to van der Spek, this is mainly because of the underdeveloped cool chain, pre- and post-handling of the flowers. "We can gain a lot there and we see a lot of opportunities to get cut flowers into our retail stores." 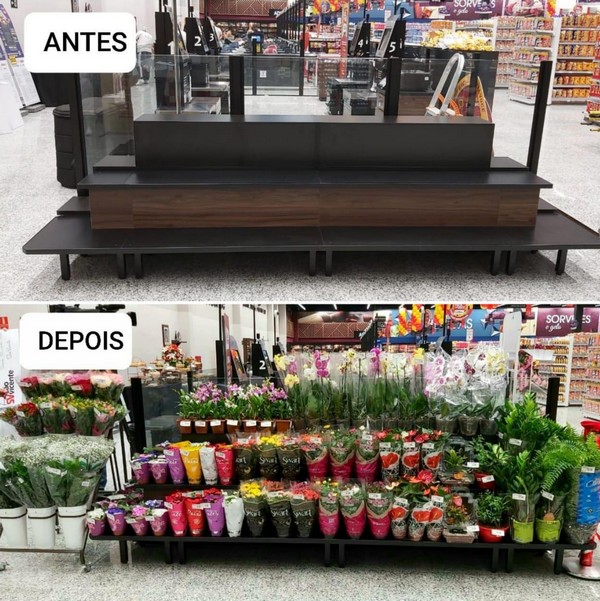 Make-Upz project
And van der Spek is always on the look for increasing the demand for floral products in several ways, and bringing innovations for his clients. In December 2019, together with the Dutch Company Greencre8, he introduced a new concept to the Brazilian market, namely the Make-upz plants. Make-Upz is a brand name of plants and flowers, which are decorated in a unique way. It is invented by Richard Grootscholten of Greencre8 a couple of years ago and van der Spek saw opportunities to make this brand succeed in Brazil. "In this concept, plants and flowers - we mainly use succulents, cactus, sanseveria, and anthurium are being colored with materials that are not harmful for the plant or flower." So far the demand is increasing. "We see that it is being picked up quite fast. The interest is high and the Brazilians seem to like it, colored phalaenopsis for example are also very trendy here."

Hectic times COVID-19
As there is still so much to gain in this sector and in this country, van der Spek never has a lazy day. Particularly with the hectic situation that COVID-19 caused over the last months. The industry has been hit hard, but fortunately sales of flowering plants are getting back on track with supermarkets having had record-sales. Lucky for Van der Spek, because in the early stage of the pandemic, he decided to expand his location at the auction in Holombra with 40% as well as increasing his commercial team with 25%. "In March, when the pandemic took off, our orders plummeted as well, but we expected that we would not meet the demand that would follow afterwards since pre-COVID-19, we already saw supermarket chains increasing the amount of supermarkets and investing in their floral departments. Of course, you never know if it will be the right decision, but we took the chance. So far it seems to have been a good decision as they welcomed several new clients.

Click here to learn more on the Impact of COVID-19 on the Brazilian market.