One important lesson that we’ve learned together as an industry is how to manage bacterial blight disease of geraniums. We’ve figured out that exquisitely careful sanitation procedures are critical at the upper levels of production, with constant checking for any breaches in safety measures. We’ve learned that growers should keep geraniums from different suppliers separate, and should grow hybrid seed geraniums separately from the cutting-grown geraniums. We know it is the vegetatively-grown geraniums that bring the risk of introducing the dreaded Xanthomonas hortorum pv. pelargonii (or Ralstonia solanacearum) into the greenhouse. By separating the crops with the highest risk of disease from those with much less risk, the potential economic loss is minimized. Now we’re applying these same principles in relation to ourselves, as we aim to dodge the invisible new coronavirus. Careful sanitation and avoiding opportunities for exposure to the pathogen are what it’s all about.

Keep different types of impatiens crop separate. We need to think the same way about impatiens and their crippling downy mildew disease. We know it’s incredibly contagious, that the downy mildew now called Plasmopara destructor spreads even more easily from one impatiens to another than bacteria spread in geraniums. The downy mildew sporanagia move easily on air currents, similarly to Botrytis spores. Just as with geraniums, there are both seed and cutting methods for impatiens propagation. For disease management reasons, the two styles of impatiens crop should never be grown together. 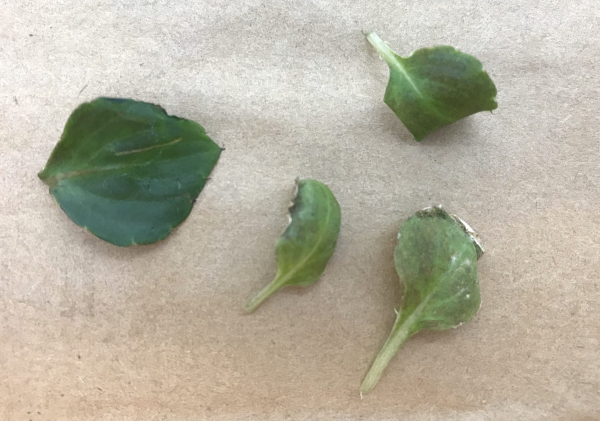 Figure 1a. What to look for when scouting impatiens for downy mildew – healthy leaf at left, symptomatic leaves at right 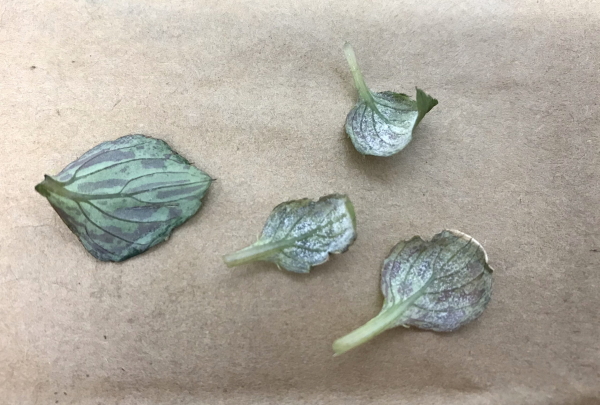 Figure 1b. What to look for when scouting impatiens for downy mildew – healthy leaf at left, sporulation of downy mildew visible on undersurface of leaves.

A number of growers learned this principle this Spring, when crops of highly susceptible double-flowered impatiens used for hanging basket crops were grown in the same operations, often the same structures, as seed-grown impatiens. Before they realized it, both crops were lost, although only one had the disease originally. Unless there is a special, concerted effort at a clean stock program, such as we have for geraniums and chrysanthemums, vegetatively-propagated plants should be thought of as more at risk (in a plant health sense) than seed-grown crops. If you or your supplier produces plugs in the same structure where related crops are grown from cuttings, the health security of the plants relative to downy mildews all drops to the level of the vegetatively grown crops. Because of the threat of downy mildew, double-flowered impatiens should be grown as separately as possible from seed crops of impatiens. 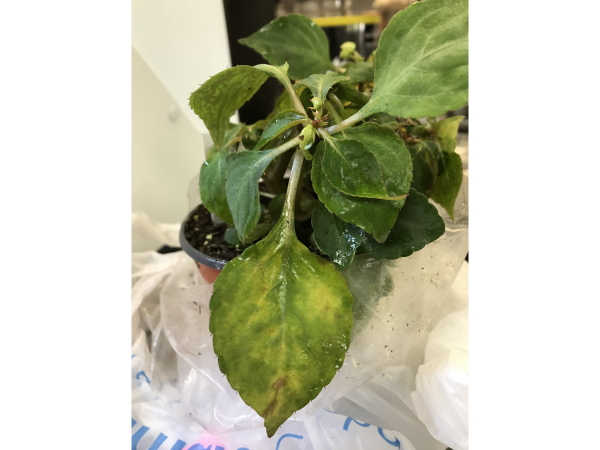 Figure 2. Yellowing of a downy mildew infected leaf on a double-flowered impatiens. 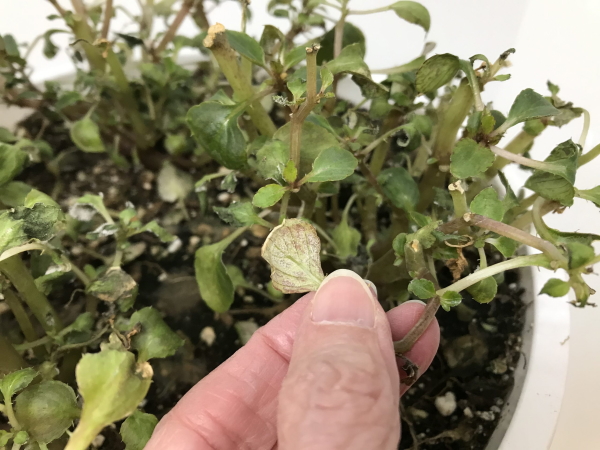 Help the resistant plants in order to reap the full advantage of them. Growers understand that “Rotation” is the way to go when applying fungicides for control of prolific spore-producers like powdery mildew, downy mildew and Botrytis. We know that using only our most highly effective, most specifically targeted, fungicide over and over again is a short-sighted behavior. The effectiveness of our single-site mode of action chemicals won’t last very long if we use them in this fashion. We should be thinking about plants’ genetic resistance in much the same way. Don’t expect the genes to do the whole job—resistant plants should be supported with sanitation, scouting, and protectant fungicides, in true Integrated pest management fashion.

We are in a wonderful new era for impatiens: after years in which growers were scared to grow I. walleriana because of the threat posed by downy mildew to them and their customers, now we have two lines of downy mildew resistant impatiens that can be grown from seed. The Imara XDR impatiens were introduced by Syngenta in 2019 and the Beacon series from Ball Pan Am came on the market this year. Having grown both lines in inoculated outdoor trials in containers, I’ve seen their dramatic superiority to other cultivars in their ability to resist downy mildew. These new lines represent a remarkable advance. They are not immune but are highly resistant, so to preserve their benefit to us, just as we preserve the benefit of fungicides by doing rotations, they should be grown to themselves. Growers who are serious about avoiding losses to downy mildew should grow Imara XDR and Beacon impatiens, and grow them away from other impatiens, never mixing them in the same greenhouse with other, highly susceptible, types. Exposing the new genetics to a high inoculum pressure is not the way to preserve the advantages of these highly resistant impatiens. The smartest way to grow the new IDM resistant impatiens is to give them their own, separate growing environment as well as some fungicide treatments to protect against downy mildew. Making them share the greenhouse environment with double impatiens or any of the other highly susceptible impatiens is unwise.