Nation's love for flowers saves the season for Norwegian importer

As there was zero air freight from Nairobi to Norway, getting the Kenyan flowers to Oslo was the biggest challenge in the middle of March, explains Norwegian flower importer Erlend van Deurs Lindberg of Svein Nesse. After two months of shipping their Kenyan flowers by truck from the Netherlands to Norway, the airfreight started up in May, just in time for the country's National Holiday celebration on May 17. And since then, their volumes are nearly at the same level as last year, but due to the high freight costs and weak Norwegian krone, margins are still lower than last year. However, all in all Lindberg isn't unsatisfied with the year so far. "Fortunately, Norway is a flower loving country and when looking at other countries, it could have been much worse." 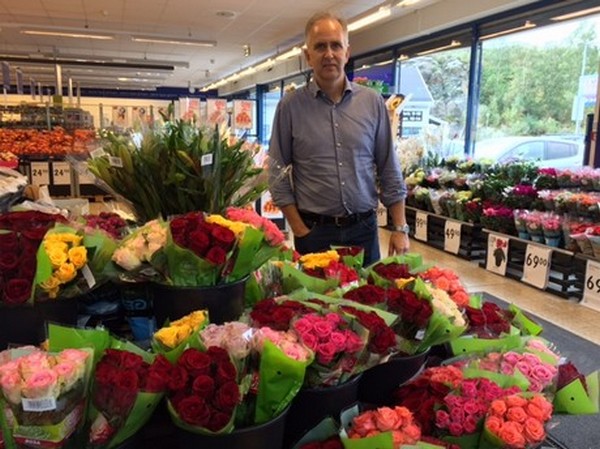 No flights, so trucks
Svein Nesse was one of the first Norwegian companies that started importing roses from Kenya. They started in the 80's and for the first time in their history, due to COVID-19, they encountered drastic logistical challenges in mid-March. "Air freight from Nairobi into Norway stopped completely. Normally we have air shipments out of Nairobi three times a week and now it was zero." So, an alternative had to be found and they did it by bringing the flowers in from Holland by truck. "Cargo from Nairobi to Aalsmeer was still continuing."

But of course, also there, logistics were challenging and Lindberg is therefore very pleased and feels lucky that he was able to get all the flowers he required. "Costs were much higher and capacity was lower. However, we've seen that the growers who send out shipments weekly also got space in the plane and the others not. Our biggest supplier is Mt. Elgon Orchards, for example, is such a grower that continued daily delivery and therefore got space in the plane."

Flower demand quickly picked up
The first week, some flower shops closed their doors, but quickly reopened and received a lot of orders. Particularly the internet orders during Easter skyrocketed, he explains. "Many people worked - and are still working - from home and stayed home when they could so internet orders increased sharply.

High flower consumption per capita
A good point to mention is that Norway is one of the highest flower consuming countries in Europe; it has the highest per capita total consumption of flowers. "Norwegians are used to buying roses and other flowers for their own consumption. Most people buy flowers every other week and rose, which is mainly being imported out of Kenya and Ethiopia, is the number one flower. The tulip takes second spot."

Just like in many other countries, the demand for roses increases for special holidays like Valentine's Day, Father’s Day, Mother's Day and national holidays", says Lindeberg. Annually, Svein Nesse imports 18 million roses and 15 percent of this volume is especially used for these kind of holidays.

Holidays fell on beneficial days this year
Even though Norway has the same holidays as many other countries, these are being celebrated on different dates, which sometimes affects the consumption of flowers. Mother's Day and Valentine's Day for example succeed each other quickly. Mother's Day is celebrated on the second Sunday in February and Valentine's Day on February 14. "Sometimes these days are celebrated on the same day, but this year, it actually fell on really good days, with Mother's Day being celebrated on February 9. Demand was very good in the weeks in advance and fortunately, it was all before the pandemic started", says Lindberg. Another important flower holiday is National Constitution Day, which is being celebrated on May 17. "Fortunately our direct flights started just before, so we were able to get all products in on time, and compared to the prices the Dutch had to pay - about 100% more for cargo flights - we were lucky our direct flights were running again even though the prices were high."

Flights still unstable but bringing in the flowers
Flower are arriving, but the freighter schedule is not stable yet. "Usually, post COVID-19, flowers arrived three times a week shipped by three different freighters. Now, it differs per week; we mostly have two freighters and sometimes three."

Lower margins
For May, June and July, the amount of flowers Lindberg imported was about the same compared to last year, however margins are lower this year. "The transport costs and the weak Norwegian krone are a result. Fortunately, we were able to increase the flower prices a bit to compensate for the loss."

Not unsatisfied
All in all Lindberg is not unsatisfied with the past months. "Of course, March and April were terrible, but all other months, we were at the same level as last year, and this without any events that have taken place. Norwegians are flower loving people and the advice of staying home and working from home probably increased the demand further."

Coming months
For the coming weeks, Lindberg has good hopes. "Most schools are about to start, very few people are travelling and they want to make their houses beautiful when spending a lot of time at home."