A new collaborative study led by researchers from the Spanish National Research Council (CSIC) at the Centre for Research in Agricultural Genomics (CRAG) in Barcelona and the Institute for Plant Molecular and Cellular Biology (IBMCP) in Valencia describes a promising strategy to improve the nutritional benefits of crops. 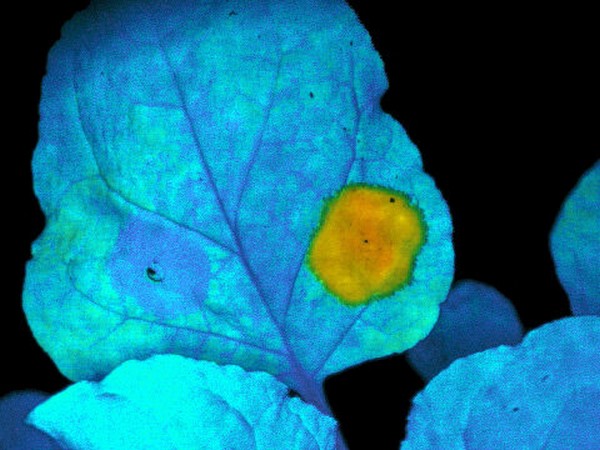 A tobacco plant with a virtual color that reflects its photosynthetic activity. Chloroplast-containing tissues appear in bluish-green color. The areas where chromoplast formation has been induced are seen in orange-red color. Credit: Luca Morelli. CRAG.

The work, published in the scientific journal Proceedings of the National Academy of Sciences (PNAS), proposes the controlled transformation of chloroplasts (organelles that conduct the photosynthesis in leaves) into chromoplasts (organelles specialized in producing and storing large amounts of carotenoids). Free of substances harmful to the environment, this technology opens new perspectives for the nutritional improvement (biofortification) of crops and for the sustainable production of carotenoids of interest to the cosmetic, pharmaceutical and food industries.

Carotenoids are a group of natural pigments in plants that protect leaves from excess light and confer yellow to red colors to flowers and fruits to attract animals to pollinate them and disperse their seeds. Well-known examples are beta-carotene from carrots and lycopene from tomatoes. Humans and animals need to ingest these nutrients in the diet as a source of vitamin A and antioxidants through the consumption of fruits, vegetables and greens. Although the chloroplasts of green tissues contain carotenoids, the highest concentration of these compounds occurs in cellular organelles called chromoplasts, which are formed from chloroplasts in flowers and fruits. This transformation is responsible for the color change during the ripening of fruits and vegetables such as tomatoes, which go from green (when they only have chloroplasts) to red (when chloroplasts transform into chromoplasts). However, chloroplasts in leaves generally do not transform into chromoplasts.

"It is not known in detail how the transformation of chloroplasts into chromoplasts works, but have now discovered that the starting point is to weaken the ability of chloroplasts to carry out photosynthesis," explains Briardo Llorente, first author and co-leader of the work. "After this stage, it is only necessary to activate the production of carotenoids to complete this complex transformation," says Llorente, who currently directs a synthetic biology laboratory at Macquarie University in Sydney (Australia). 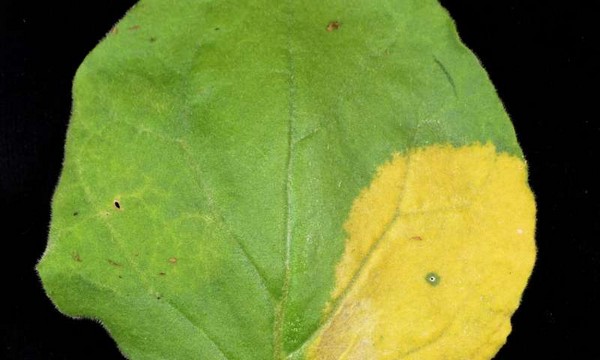 A tobacco leaf in which chromoplast formation has been induced in the lower right, which is reflected in the development of a golden-yellow color. Credit: Luca Morelli. CRAG.

The two phases of this process occur naturally in flowers and fruits, and the work that is now published shows that they can also be induced in leaves by stimulating the production of phytoene, the compound from which the different types of carotenoids are formed. The production of phytoene causes a synthetic transformation, that is, an unnatural transformation of chloroplasts into chromoplasts. "Our tests show for the first time that when the level of phytoene exceeds a certain threshold, it weakens the photosynthetic capacity that characterizes leave chloroplasts. Afterwards, the conversion of this phytoene into carotenoids causes the weakened chloroplasts to transform into chromoplasts with very high levels of these healthy nutrients," points out Manuel Rodríguez-Concepción, CSIC researcher at CRAG and co-leader of the study.

In addition to helping to solve a fundamental question in biology, showing that the loss of photosynthetic capacity and the synthesis of carotenoids are not only the consequence but also requirement for the transition from chloroplasts to chromoplasts, this research brings to the table a procedure with enormous potential to increase the nutritional value of leaves and other green parts of plants, which are especially reluctant to biofortification with carotenoids. The induced formation of chromoplasts causes the leaves of edible plants such as lettuce and green vegetables such as zucchini to acquire a characteristic yellowish-golden color caused by the accumulation of carotenoids.

The developed system works in all plant species tested so far, so it could be used to enrich the harvestable tissues of crop plants with carotenoids once their photosynthetic activity is dispensable (for example, just before harvest). "It is a very applicable technology both for the food industry and for the sustainable production of carotenoids of interest such as natural pigments and nutraceuticals. We are currently seeking to improve the system for use at an industrial level," highlights José Antonio Daròs, CSIC researcher at the IBMCP. Researchers from the Institute for Integrative Systems Biology (I2SysBio) and the Institute for the Preservation and Improvement of Valencian Agro-diversity (COMAV), also in Spain, as well as researchers from Australia, Germany, France have also participated in the work.