“Growers currently feel frustrated by not having systems that speak to each other. And the truth is that, until other large industry players also provide public APIs, growers are always going to be constrained in what they can do with their data. But we’re leading the charge,” explains Chief Technology Officer Jonathan Morgan.

“We know that many growers use CSV exports like Microsoft Excel, which can be slow, labour-intensive and requires a lot of manipulation to get benefit. Connecting systems via the API will give added efficiency to the process and unlock countless possibilities for external development of features and integrations.”

“We announced the first global API solution for indoor growing in July 2017, and we’ve come a long way since that initial launch. At that time, we were exploring the possibilities and to spur not only our own R&D team but the industry as a whole. From that point we have advanced into wireless sensor capabilities, Bluetooth connectivity, successful A.I. powered tomato yield prediction and cloud-based AWS platform builds; all continuing to give our customers an added advantage in market,” says Mr Morgan. 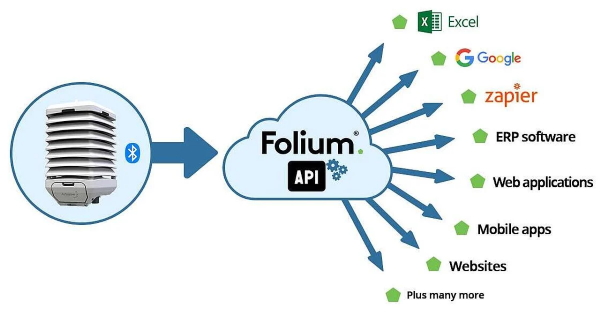 “Public API’s have been available for consumer products for quite a while. A great example would be Google maps where Google gave access to third parties to create thousands of location-based apps using their public API,” notes Mr Popat.

“For our industry, an example would be a developer connecting Folium sensor data using the API to those CSV files but also their Alexa, Siri or Google Assistant. If your temperature in your greenhouse gets too low or too high an alarm could sound in your bedroom or Alexa could play you a song or your Fitbit could sound an alarm. Nothing is impossible.”

One of the key benefits of an API for growers is the ability to customize.

“With Folium there could be 50 features you want to add to the platform to work with your business model. We could potentially build 35 of them, but the other 15 is possible through this API for a business to create themselves. Or a 3rd party wanting to build applications on top of the Folium platform now has the key to be able to do it,” says Mr. Morgan.

“From our perspective public APIs are the future of CEA and we’re looking forward to seeing developers utilize both our API and our Folium Sensor Network to push our solution even further.”