Alexandra Farms, being part of the wedding and event industry and not part of the supermarket industry, was hit very hard by the pandemic. "Weddings and events in our most important market, the USA were all canceled. We were down 90 percent for several weeks in March and April", says Jose Azout, owner of this cut garden rose farm. To reduce their expenses, they cut back 4ha of their 20ha farm. In an effort to innovate and renew their offering and being optimistic about the future, they recently planted 2ha with new varieties including 5 brand new spray garden roses for the coming wedding seasons.

Jose Azout at Flowers Expo 2019 in Moscow, Russia. (As we speak, this show is being held, in an online and offline format, click here for more information)

Back at 70 percent budgeted sales
After being drastically down in sales for several weeks in March and April, demand started to increase afterwards. "Sales have slowly been picking up and finally in August we are back at 70% of budgeted sales."

2ha with new varieties
In order to reduce the expenses, they quickly decided to cut back their 20ha acreage by 4ha. As sales started to increase again, they took the opportunity to innovate and renew their offering and decided to plant 2ha of those 4ha they reduced with new and, according to Azout, better varieties. "In fact we will launch 5 new spray roses for next years wedding season! Three of them are part of our Wabara line from the deluxe Japanese rose breeders. These varieties are Aoi Fuga, Sola and Loli. The two other spray varieties are still a secret." 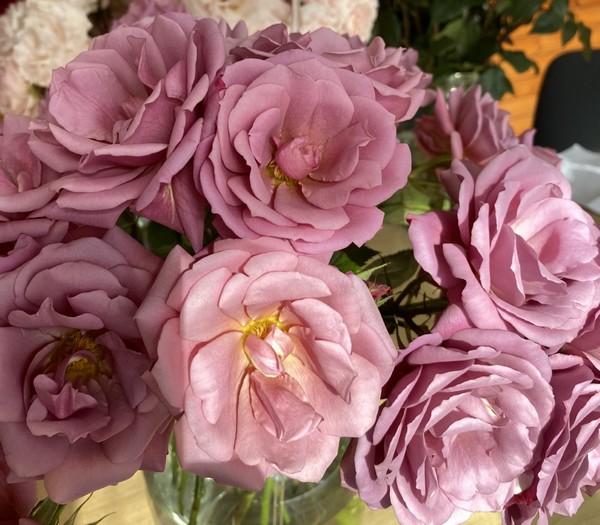 On top of that, they will also launch several deluxe garden rose varieties. "I am free to announce only one of them: Westminster Abbey from Schreurs", he says.

"Westminster Abbey is a fabulous on trend color: somewhere between a taupe and a silver center with light pink highlights in the outer edges of the petals. It is only grown by a few farms around the world and not yet available from South America. The US market is currently importing it from the Netherlands which is the first producer of this amazing rose."