These Lanzhou roses expected to (on average) outperform Kunming roses

In China, the largest high-tech rose project is currently under construction. The 34ha rose project is located in Lanzhou, Northwest of China's Gansu province, very close to a 7,000ha plot that was prepared to host greenhouses. This latter project will become the largest greenhouse project under one roof. The projects are subsidized by the government of the province, and Chinese company AiBiDa Greenhouse Technology Co., LTD is appointed to take care of all operational activities. The investors decided to cooperate with Dutch technical suppliers like BOM Group, Codema and Priva for the greenhouse technology. The majority of the rose varieties, for the 34ha rose project, will be planted from breeder Schreurs who is worldwide known due to their popular variety the Red Naomi. 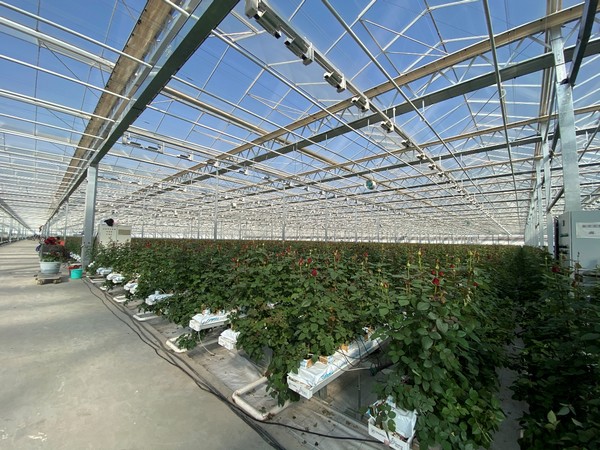 Red Line! roses of Schreurs in the greenhouse

The first 16ha of the 34ha rose greenhouse are yet in operation while the final 18ha are planned to be ready by Spring 2021. Due to the high light intensity and the cold and dry climate, the quality of the roses is expected to outperform most other Chinese projects, and on average even higher than what is cultivated in the province Yunnan, also known as the ‘floriculture province' in China. 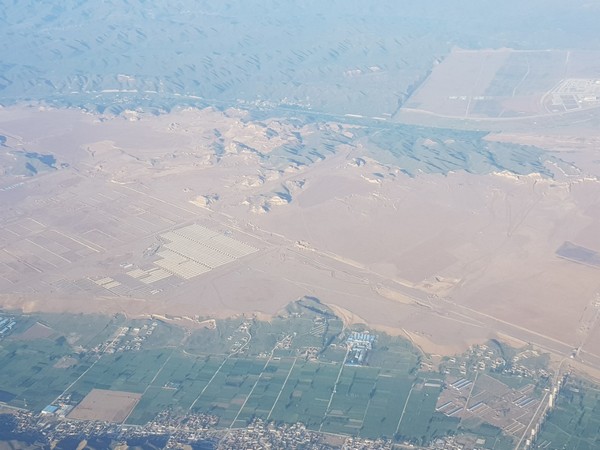 Aerial picture of the 7,000ha plot where you can see the hills being flattened.

Lanzou creating new area
About 10 years ago, the government of Lanzhou started to flatten the hills to make space for 'Lanzhou new area district', They started building houses - currently 300,000 people are living there - and took into account agriculture as well. "In China, they are working hard to become self-sufficient and less dependent on imports. Therefore, they decided a huge agricultural area to this new district, aiming to create a new "Westland" area, like the horticultural area in the Netherlands," explains Just Roos of Codema, one of the key parties involved in the greenhouse project, supplying and installing all cultivation and irrigation systems in Lanzhou. 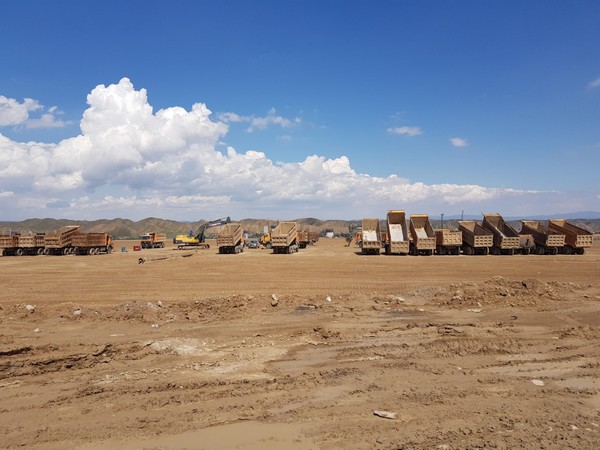 Trucks that are flattening the area. This is a huge and impressive project. Preparing the land for construction has been an investment 4 billion RMB, half a billion Euro.

Modern greenhouse
A few years ago, they built the first greenhouses on the 7,000ha plot. They started with typical Northern Chinese style solar greenhouses and thereafter followed by high-tech "Dutch style" greenhouses. The government decided to dedicate part of this enormous project to a company that is specialized in running modern Dutch style greenhouses, namely AiBiDa. For several years now, they advise greenhouse projects to the Chinese local governments as they are one of the first successful Chinese companies that set up profitable high-tech horticultural companies in China.

One of the projects AiBiDa is currently working on is the 34ha rose project that is very close to the 7,000ha plot. In June 2019, they started building the 34ha project that will almost entirely be used to produce cut roses. The project is divided in three phases; the first is 4ha - of which 1.2ha is used for the propagation of the roses as well as the cultivation of some other products like pot zantedeschia and cut flower gerberas. In the second phase 12ha and another 18ha were added solely for the production of cut roses. The last phase of 18ha is currently under construction and is planned to be finished early 2021. 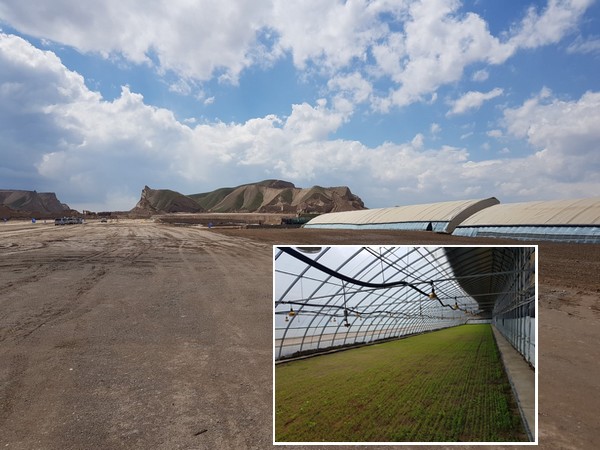 On the right some solar greenhouses, which are being used for herb cultivation, and in the back the hills that are being flattened.

Dutch technology and roses
AiBiDa is taking care of the project and decided to use Dutch technology. "Even though the company isn't that old, the stakeholders, five in total, have many years of experience in the floriculture industry and therefore also gained experience with these companies." BOM Group, supplied the greenhouses, CODEMA supplied and integrated all internal technology such as cultivation and irrigation systems, and all systems are controlled by the Priva computer The majority of the roses are being supplied Schreurs, of which AiBiDa is their agent in China.

According to Roos, the cooperation worked out very well. "AiBiDa has a lot of knowledge about cultivation, sales and marketing. They know the market and the companies very well. Also the Dutch companies know each other and often cooperated on other projects. CODEMA and Schreurs for example are having a business relationship for about 40 years now, they also use our container and plant handling systems in other projects, so they know our systems and how we work." The Dutch suppliers together with professional operating company AiBiDa makes this project a great example of a complete concept. From design and construction, to operation and sales. 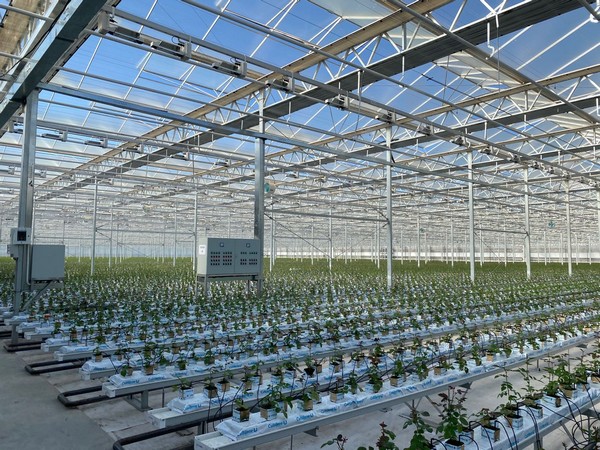 First roses planted on rockwool substrate. The plants are propagated in the 1.2ha propagation unit of the project.

Quality of roses expected to be higher than the average in Yunnan
Yunnan is the province with the largest acreage of flower production in China. However, it is expected that the average quality of the roses produced in Lanzhou could be much higher, but why?

Edwin Haze of Schreurs explains: "The greenhouse is located at an altitude of around 2,000 meters above sea level in a Steppe climate zone and has high light intensity levels and much more sun hours due to a lack of moist in the air. The average yearly precipitation is around 330 mm in Lanzhou and more than 1000mm around Kunming, the capital of Yunnan Province where most flowers are produced. Another advantage of the Lanzhou location is that the rainy season is relatively short, from late June till early September. While in Yunnan, the rain season lasts from May till half October. Therefore, the relatively dry and sunny climate  provides better light levels throughout the year. And for a rose crop where large head sizes are important, these characteristics including a night temperature underneath the 18 degrees Celsius, can achieve great results. In Lanzhou, the night temperatures are below this level year-round and therefore, particularly in the warmer summer months, we expect to produce high quality roses. The quality is expected to be more constant with larger head sizes than average Yunnan quality roses."

Covid-19 put pressure on local Chinese team
The project is planned to be finished in Spring 2021. Even though the cooperation went well for all parties, it has been one of the most challenging projects due to Covid-19, putting a lot of pressure on the local teams. "We were fortunate to have established our local team in China. Usually, our Dutch team members are at the project to manage and supervise the installation, but now the local team had to do it all on their own and they did an amazing job!" For eight months, the Chinese team worked with only remote assistance and this resulted in gaining several benefits. 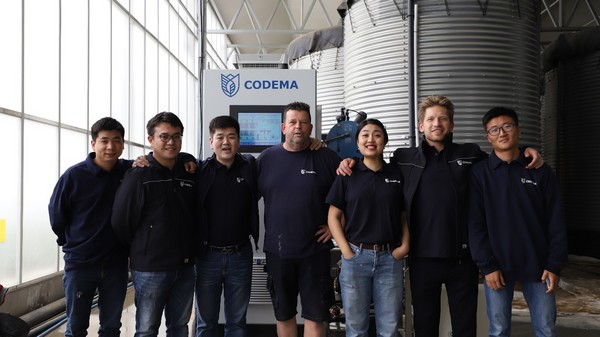 "First of all, the team made great progress in personal development. Moreover, we were able to lower the Dutch commissioning time by 80%! During the midst of the pandemic, three of our Chinese technicians have been there non-stop. From the Netherlands we used VR glasses to give them the best possible instructions, although the real work had to be done by themselves. Finally, by the end of August and after two weeks of quarantine, the Dutch team including myself was able to return to the project for the finishing touch, the commissioning of the irrigation units. All in all, it has been a challenging period but with major gains, and for me personally the first and most impressive project I ever witnessed, from scratch to completion," Roos says. Later this year, all of their cultivation and irrigation systems will be ready for planting.