Humidity control is a crucial element of protected agriculture, and one around which the discussion is consistently developing. Whereas relative humidity was previously the main parameter considered by growers, vapor pressure deficit is becoming an industry standard when discussing humidity in greenhouses and indoor farms. Relative humidity expresses the amount of water vapor in the air in relation to the air’s saturation point, with the air’s water-holding capacity varying according to the air temperature. Alternatively, VPD expresses the difference between the air’s water content and its saturation point in terms of pressure, making it independent of temperature and a more accurate parameter for modeling transpiration by plants. A high VPD indicates that the water vapor pressure in the air is significantly lower than that of the leaves, driving water loss and potentially devastating the crop. Mark Stanley, CEO of California-based MicroCool, explained that humidity control systems have improved dramatically in the past 40 years, part of which is due to an increased focus on VPD. MicroCool manufactures high-quality fogging and misting systems, which have been installed in greenhouses and indoor growing facilities across the world. While “the injection of microscopic water droplets has [not fundamentally changed in 40 years], the machine that is driving it is much more sophisticated and the machine that is controlling the on/off and maintenance of humidity level is much more sophisticated.”

MicroCool’s high-pressure fog systems control humidity by producing billions of microscopic water droplets (<10 microns in size), which absorb energy from the surrounding air to change state, creating water vapor and effectively increasing humidity. This flash evaporation, made possible by the droplet’s microscopic size, is also defined as adiabatic cooling, as the water droplets absorb heat during evaporation. According to Stanley, “the amount of fog that you can actually inject into the air is very much dependent on the air that air that you are injecting it into”. Using arid regions as an example, Stanley explained that fogging systems are especially efficient in hot, dry regions as the grower can inject a significant amount of fog into the air for cooling and humidification. 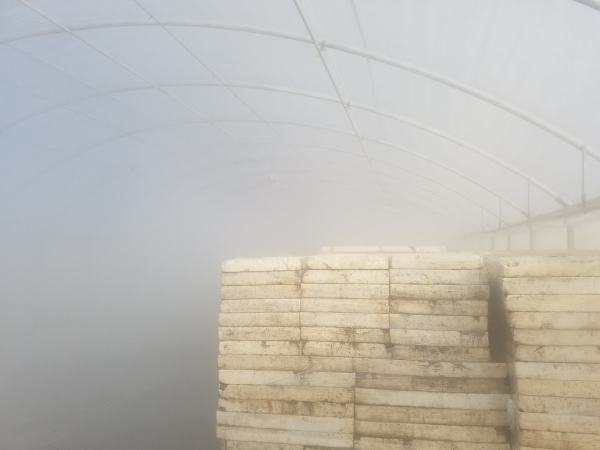 Aside from adopting a VPD-based approach to cooling and humidification, Stanley also explained that fogging and misting systems have benefited from improvements to reverse osmosis systems (which can be included in MicroCool’s systems). Reverse osmosis (RO) systems allow growers to remove minerals, bacteria and viruses from the supply water, thus preventing equipment corrosion, calcification of nozzles and the potential deposition of calcium carbonate onto the crop, which is non-toxic but can add an undesirable sheen to the crop. Luckily for growers, the cost of RO systems has decreased significantly since the technology’s introduction, and the use of valves throughout MicroCool’s systems also allows the grower to reduce pressure in the water lines without draining all of the RO water, thus providing water savings to the grower.

MicroCool also addresses water quality by incorporating UV lighting to kill water-borne pathogens. As Stanley explains, the water droplets are 10% of the diameter of a human hair, thus are easily aspirated by plants and humans; water quality is therefore imperative. 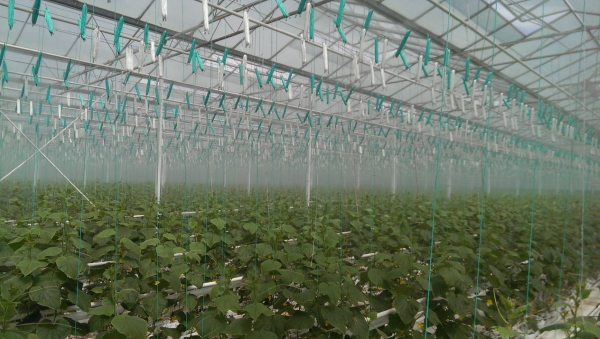 According to Stanley, the most important element of a fogging and misting system is the controller. An effective fog system requires a high-quality controller and while such controllers may seem prohibitively expensive, Stanley ensures growers that “a fog system is only as good as the controller behind it.” A well-designed control system allows for the accurate measurement of greenhouse conditions and the subsequent engagement of the fog system to meet crop requirements. While MicroCool does not have a proprietary controller, the company works with numerous providers to ensure that its fog systems are effectively integrated into greenhouse operations and match the grower’s capabilities.

Whereas MicroCool’s IBEX Heavy-Duty Industrial Humidifier System is most suitable for greenhouses and high-headroom sites, the company has developed the FOCUS system for low-headroom installations such as indoor growing operations and low greenhouses. As Stanley explains, the FOCUS system consists of “individual nozzles, each with a solenoid valve, and they can be positioned along the wall in strategic positions to provide humidity for indoor growers. [The fog] is even finer than that used in greenhouses.” With these innovations in hand, MicroCool confidently provides high-quality fogging systems to a wide range of growers across the world.