Plant greenhouses use dripping/irrigation lines or hydroponic systems to provide the plants with sufficient water. However, invisible from the outside, a biofilm may build op on the inner lining of these water systems. Such biofilm may significantly reduce the water flow or even physically clog entire drippers, and may provide an ideal hiding place for plant pathogens.

The build-up of a biofilm typically starts with the attachment of a single microorganism cell in suspension onto a surface, for example the inner surface of a water line. This microorganism starts to multiply and secretes extracellular matrix components to build a protective environment. So the biofilm inside a line is not just a slimy layer, but actually a well-structured and highly organized microbial community. This process is accelerated by the relatively high temperatures and organic soiling typically present in irrigation water, and further stimulated by relatively low flow volumes at start of culture.

Intra Hydro pure effectively removes biofilm
Years of worldwide experience in the horticulture industry have demonstrated that traditional disinfectants like chlorine may disinfect the water itself, but do not remove the biofilm and/or form harmful residues. Intra Hydro pure is a silver-stabilized hydrogen peroxide solution that both disinfects the water, but also physically removes the biofilm from the inner lining. Due to its unparalleled stability, Intra Hydro pure remains active from the beginning of the water line until the last dripper. The addition of 40 ppm (40 ml Intra Hydro pure per 1,000 liter of water) guarantees that the water will remain free of microorganisms and no biofilm will build up in the water system. The functionality of Intra Hydro pure has proven itself around the globe in the most varying practical conditions, the study described in this article clearly visualizes its functionality under experimental test conditions.

Biofilm generator to study biofilm formation and removal
Intracare has developed a biofilm generator as a model to study the natural growth and subsequent removal of biofilm with Intra Hydro pure in an experimental set-up. Plastic tubes representing the drinking water lines were filled with Fusarium contaminated water to mimic the spread of a model greenhouse pathogen. Watering behavior was mimicked by a daily flow/no-flow schedule.

Water quality was determined by measuring the amount of adenosine triphosphate (ATP) as a marker for micro-organisms using the Intra Clean Quick Scan in Relative Light Units (RLU). Removable plastic inserts were positioned inside the tubes to assess the number of bacteria and fungi in the biofilm. When the growing biofilm was clearly visible by eye and water ATP measurements started to stabilize, the continuous addition of 40 ppm Intra Hydro pure was started to investigate its effect on the biofilm.

Visible growth of biofilm and its fast removal with Intra Hydro pure
From the start of the experiment, a gradual formation of a biofilm was noticed by eye, resulting in a clearly visible greasy layer in the inner lining of the tubing and inserts (Figure 1). This visible biofilm completely disappeared from all surfaces after the continuous addition of Intra Hydro pure was started. 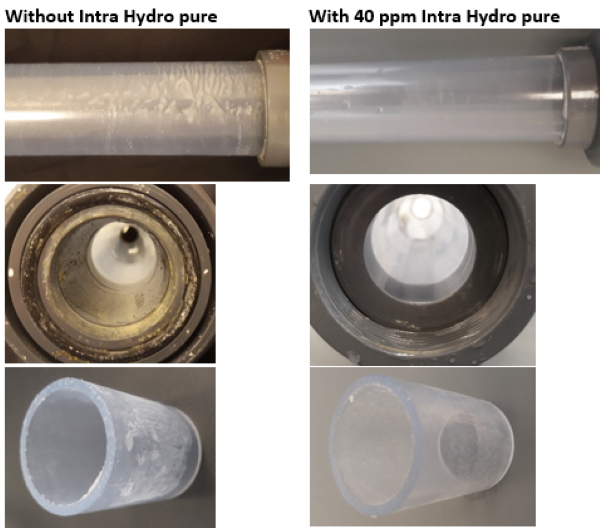 Figure 1. Visual appearance from the outside of the tube (top row), inside the water system (middle row) and on the inserts (bottom row) before (left) and after (right) the continuous addition of Intra Hydro pure to the water.

During the biofilm growing period, the water ATP count rapidly increased up to 1,662 RLU, indicating severely polluted water (Figure 2). After the continuous addition of Intra Hydro pure, the RLU count rapidly decreased within a short timeframe and remained low, as the measurement in week 19 shows with an RLU value of 66.

Figure 2. Water pollution before (red) and after (blue) the continuous addition of 40 ppm Intra Hydro pure.

The ATP measurements are in line with the total aerobic (bacteria + fungi) counts from the water and the inserts (Figure 3). Both counts rapidly increased within weeks to an 18 million-fold (1.8 x 107) and 1.5 million-fold (1.5 x 106) increase, respectively. The subsequent continuous addition of Intra Hydro pure quickly resulted in log 7 and log 6 decrease, demonstrating the fast and effective removal of microbiological contamination from the surface of the inserts and inner lining of the tubes.

Figure 3. Total aerobic counts of bacteria and fungi in the water (top graph) and biofilm (bottom graph) before (red) and after (blue) the continuous addition of Intra Hydro pure. Please note the logarithmic scale.

The total aerobic count represents the sum of bacteria, fungi and yeasts. Many botanical diseases are actually caused by fungi like Fusarium spp, Pytium spp, and Botrytis spp. Therefore, the presence and elimination of fungi in the water and biofilm was additionally visualized on fungal culture growth plates before and after treatment with Intra Hydro pure (Figure 4). The presence and elimination of plant pathogenic Fusarium spp. was confirmed using microbiotechnological techniques. 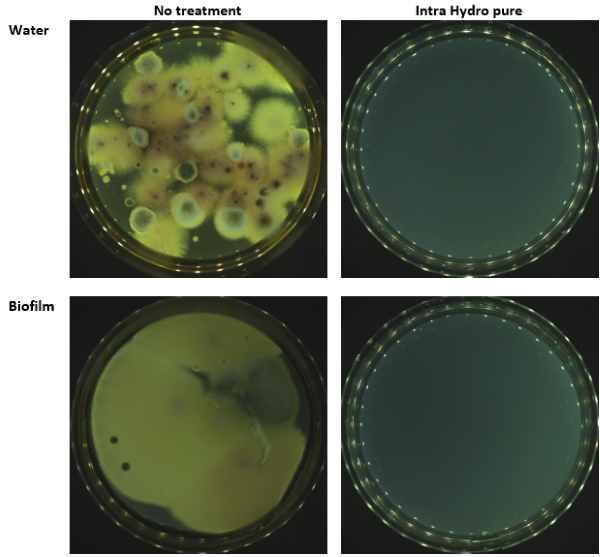 Practical use of Intra Hydro pure in greenhouses
The biofilm generator enabled us to visualize the rapid growth of a biofilm inside an irrigation water system and clearly demonstrated the fast and effective removal of this biofilm with the continuous addition of 40 ppm Intra Hydro pure. This set-up created a worst-case situation by the intentional addition of polluted water containing a mixture of pathogens, allowing the growth and development of a phytohazardous biofilm. However, in practice it is common use to clean and disinfect the entire water system at crop change with 1-3% Intra Hydro pure and start with 40 ppm Intra Hydro pure from the beginning of, thereby not providing the biofilm any chance to start its formation.