Emirates SkyCargo has recently crossed key milestones in its global freighter operations. The cargo division of Emirates recently completed 10 years of operating dedicated cargo flights on its Boeing 777-F aircraft to Viracopos in Brazil and five years to Brussels. The air cargo carrier commenced freighter flights to Viracopos on 31 October 2010 and to Brussels on 25 October 2015.

Emirates’ Boeing 777 freighter aircraft have been at the heart of the carrier’s cargo operations since 2009. The aircraft has the capacity to transport up to 100 tonnes of cargo per flight and features wide main deck doors, allowing for the loading of heavy and outsized cargo. During the Covid-19 pandemic, Emirates SkyCargo’s fleet of 11 Boeing 777-F aircraft executed an important proportion of scheduled and chartered cargo operations around the world to transport medical supplies such as PPE and pharmaceuticals. Currently, Emirates’ freighter aircraft operate to more than 30 destinations across the globe.

Viracopos is currently one of two airports connected by Emirates SkyCargo in Brazil. The air cargo carrier also offers cargo capacity on Boeing 777-300ER passenger flights to Sao Paulo. Both airports serve to connect the industrial and technological hub of Brazil. Throughout the Covid-19 pandemic, Emirates has played an important role in maintaining air cargo connectivity between Brazil and the rest of the world, helping transport vital commodities such as medical supplies and pharmaceuticals into Brazil and at the same time transporting exports from Brazil to other international markets. 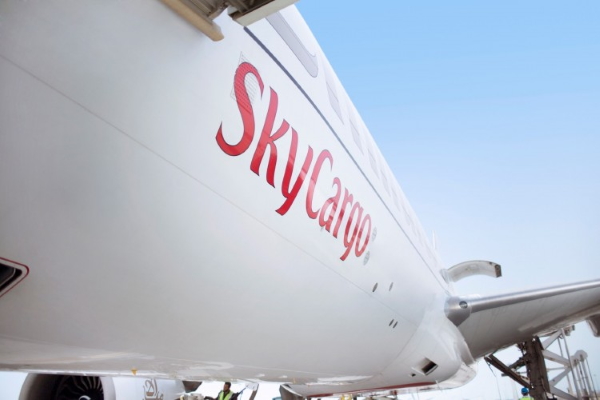 Emirates’ freighter services to Brussels were started in 2015, a year after the launch of passenger flight operations. The freighter flights were introduced to supplement cargo capacity available on passenger flights to transport commodities such as pharmaceuticals and perishables. Brussels is one of the more than 30 cities involved in Emirates SkyCargo’s pharma corridors initiative to provide enhanced cool chain protection from origin to destination for temperature sensitive pharmaceuticals. Currently Emirates SkyCargo offers cargo capacity to customers in Belgium on 10 weekly flights, including two operated on the Boeing 777 freighters.

Emirates SkyCargo is an important facilitator of international trade connecting more than 130 destinations across six continents with cargo flights. The air cargo carrier offers cargo capacity on its fleet of wide body aircraft including 11 Boeing 777 freighters.