Produce Business announced in their October 2020 issue, they are celebrating 35 years in print by paying tribute to 35 living Vanguards and 12 departed heroes. J Schwanke is the single floral industry professional among those recognized. 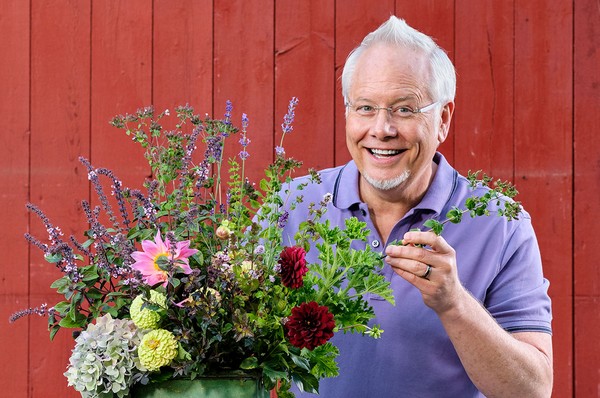 The publication defined a Vanguard as “those who helped to build a better industry.”

From the press release: “…we have little doubt that the industry would not have advanced as it has, had these leaders not been in place. Countless moments of crisis, countless opportunities in technology and politics, countless instances that demanded leadership — these moments were met by these individuals — men and women willing and able to seize the opportunities and advance the industry.”

“I was surprised and, of course, honored to be included in such a varied and distinguished group,” said Schwanke. “I don’t often think of myself as a leader per se, but empowering people to enjoy flowers has always been at the forefront of what I do - and now translates in a very literal sense to our tv show, J Schwanke’s Life In Bloom.”

J Schwanke’s Life In Bloom is the first lifestyle program centered around flowers. Segments educate and empower viewers to enjoy flowers in their lives as often as possible - and in both traditional and new and different ways. The show is broadcast on public television stations (PBS) nationwide as well as on the Create TV network, reaching upwards of 92 million viewers with flower-focused content.

“Recognition is always appreciated, but honestly, creating a nationwide tv show dedicated to flowers and the benefits they offer, has been a long-time goal of mine,” noted Schwanke. “It’s only when we take a step back to consider how we arrived at this point in time, do we take in the journey, as well as the result.”

Reaction to the show has been overwhelmingly positive, and Schwanke hears often from viewers who have taken the show’s mission to heart, by including flowers in their lives, and taking time to enjoy the process of arranging.

“Flowers are powerful, and scientific studies have concluded that the act of arranging flowers improves mood, reduces stress, and results in a more relaxed feeling overall. I am excited that people are inspired by the show to give it a try,” says Schwanke. “However, it’s also been shown that just the presence of flowers - even a picture of flowers - can have similar benefits.”

Schwanke is humbled by the comparison made by one viewer. “They said I was the ‘Bob Ross’ of flowers - that’s a pretty wonderful comparison.” (Ross was the creator and host of The Joy of Painting, seen on PBS, known for “happy trees and happy clouds” along with his signature hair.)

The Produce Business Vanguard Awards will be celebrated all year long, with recognition in print and digitally. See the list of 35 Vanguards and read about their Vanguard Heroes at the link: https://www.producebusiness.com/35th-anniversary-issue-the-vanguard-awards/ .

Underwriters of J Schwanke’s Life In Bloom include: Albertsons Companies and Sunshine Bouquet Company. Chrysal is the closed caption underwriter for season one. All episodes of seasons 1 & 2 stream for free online in the U.S. at the url www.uBloom.com/LifeInBloom. Underwriter opportunities for Seasons 3 & 4 are available at various funding levels. Season three will begin airing in April of 2021. Contact j@uBloom.com for more information and opportunities.