Lilacs and Ilex grower Marcel Groeneveld has been working with Jamafa's new flower processing line for about one month now and is the second grower in the Netherlands using this brand new introduction. He has already been working with the Jamafa Universal grading machine since 2018 and is still very satisfied with the combination of the two.  "The machine saves labor, speeds up the processing proces and provides more uniform bunches. All in all, it gives peace of mind and more more job satisfaction," he says. FloralDaily stopped at his facility to take a look. 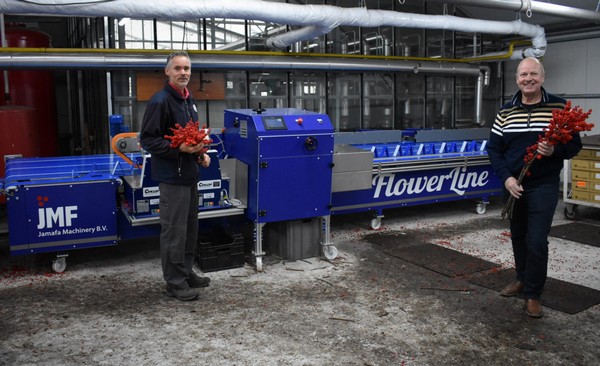 Grower Marcel Groeneveld and Bas Goede of Jamafa in front of the new FlowerLine.

Groeneveld is a seventh-generation grower who mainly cultivates lilacs and Ilex, a good combination because their seasons follow each other.  The cultivation of lilacs is his core business, but the season hasn't started yet. He is currently busy processing Ilex. This will last until the end of December.Then, the Ilex -which is currently drying in the 0.5 ha greenhouse - will make room for the lilacs. A part of the greenhouse is also used for the production of pot plants.

Ilex verticillata
The Ilex branches are processed from October to December. The Ilex verticillata, also known as winterberry, is part of the outdoor cultivation that starts in October. Groeneveld has 10,000 shrubs that are harvested in 2 lots every other year. The berry branches (the female shrubs) are cut from the shrubs after which they are taken to the nursery. In the greenhouse, the branches are put under plastic to "brew". Within four weeks the leaves fall off and only the branches with the berries remain. This means they are ready to be processed. 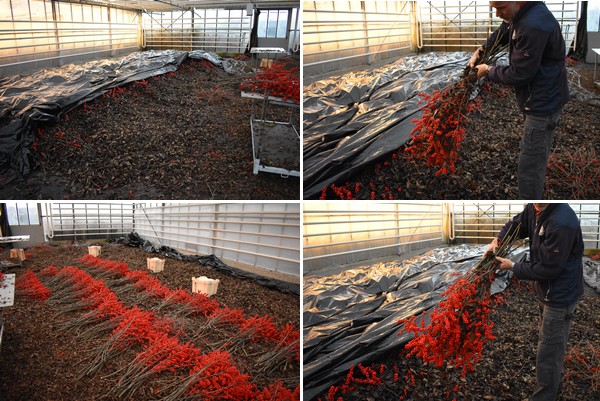 Clockwise, the "brewing" process. Top left: the branches are still under the tarpaulin, then the leaves are shaken off and the branches with berries remain (bottom left).

Processing - Grading
The Ilex branches, but also the Lilac's, are processed in the warehouse into bunches and this process, from grading to bunching, has been fully automated since early November.

"My father used to do the grading, but he's getting older, so we started looking for a grading machine because our first machine needed replacing. We ended up choosing Jamafa, who have a grading machine that can grade all kinds of flowers using a camera. It can sort them by length, thickness, volume of the flower / berries, and number of buttons moet zijn flower buds. "At first I was quite skeptical, but after seeing the machine being used by another grower we chose the 'Jamafa Universal grading machine'."

Groeneveld has been working with this machine since 2018 and is very satisfied. "First of all, it saves us a lot of work, the bunches are more uniform and because of that we have not received any complaints in terms of quality from the flower auction, to whom we deliver most of our flowers, or from other customers".

How does the grading work? Groeneveld: "Only 1 person is needed to control the machine. After the machine has been set to the grading criteria (we can enter 12 different criteria), we can start by simply placing the stems in the tray at the beginning of the conveyor belt. Next, the camera scans the branch and assigns it to a certain grading". See below. 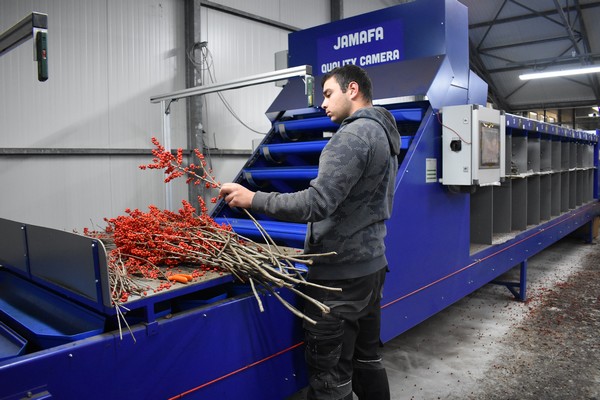 The Ilex is placed in the trays per branch. On the right the 12 grading compartments. 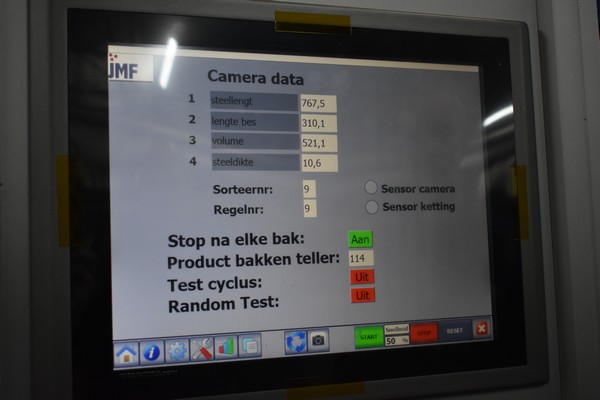 The data from the camera. 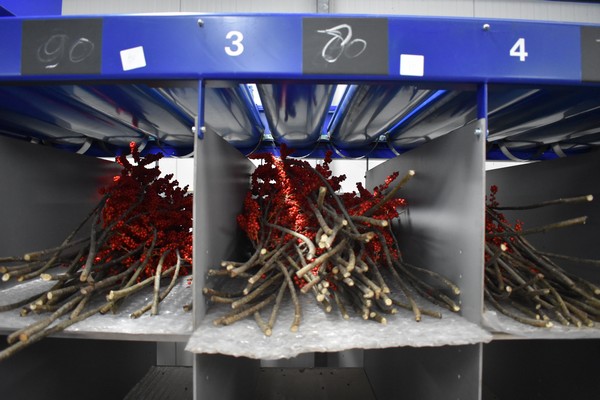 The graded branches in the trays. The preset grading criteria can easily be adjusted on the tray with a crayon.

Flower processing line
After grading, the flowers are bunched on Jamafa's brand new flower processing line. This flower processing line, also suitable for processing Lilacs and many other types of flowers (with both hard and soft stems), is officially called the FlowerLine and distinguishes itself from other machines by, among other things, quiet processing. For cutting the flowers other machines often work with a circular saw, but Jamafa has chosen to work with a combination blade (a rolling blade and a counter-pressure roller). "This not only results in the branches being cut off quietly but also prevents the bunch from moving, which you normally see with a circular saw that is blunt," says Bas Goede, Sales Manager of Jamafa.

The line works as follows: After the graded branches are removed from the trays, they are placed in bunches on the FlowerLine, after which they are cut to size and bound. Below the step-by-step process.. 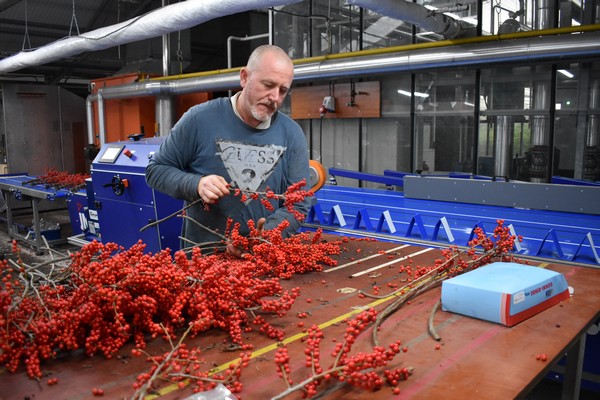 From the grading tray, a certain number of branches are bundled. 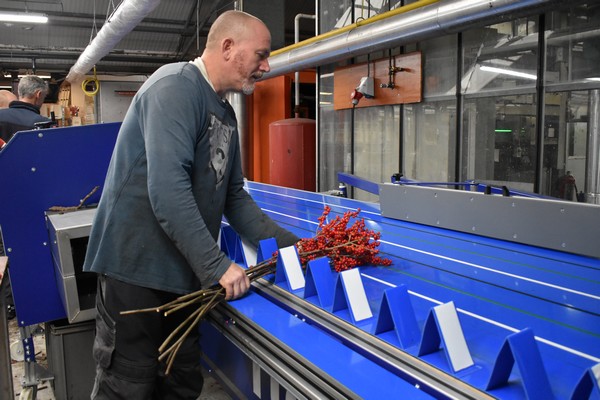 The bunch is put on the conveyor belt. The belt slopes at a 6-degree angle, allowing to better see the product and follow the lines that indicate the length. The use of lines allows different product lengths to be processed simultaneously. 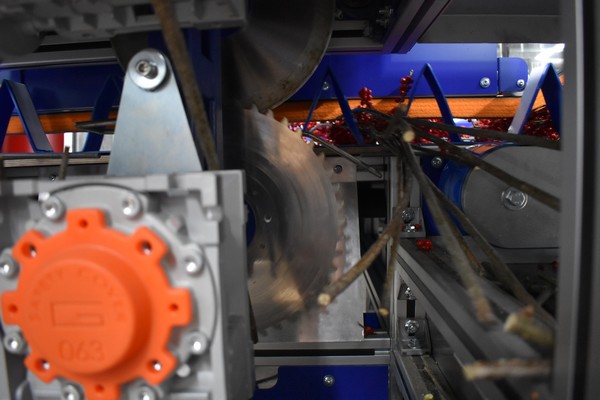 After this, the bunch arrives at the 'rotating scissors', where they are cut off quietly. 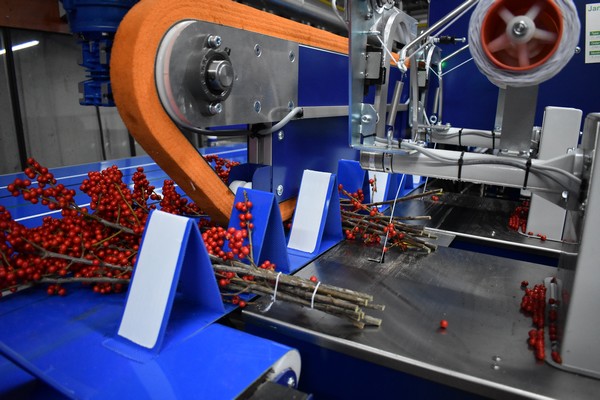 After the bunch is cut, it is bound twice by a Cyklop binder. "We are not going to invent what is already for sale on the market. We would rather work together and use that," says Bas Goede. 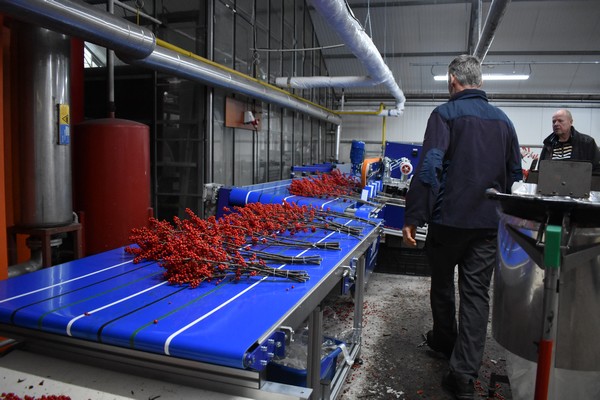 The bunch is ready to be sleeved now. 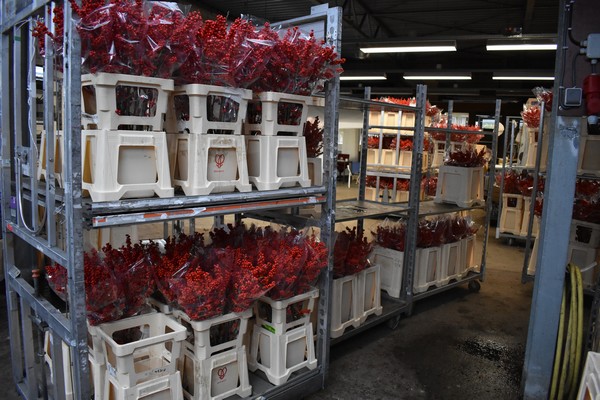 After sleeving, the bunches are put in water containers, ready for transport to the flower auction.

Groeneveld is the second grower to use this line. Voorn Roses is the first, see the video below.

More peace of mind and fun
Due to the new flower processing line Groeneveld has gone from needing 5 to only 3 people for processing. This is a financial advantage, but according to the grower, not the most important. "It gives more peace of mind and we're having more fun working," he says. "Normally when processing the Ilex, especially in the run-up to Christmas, we really have to make a big effort to keep up. Now that's not a problem at all. Our bunches are also more uniform, the camera in the Universal grading machine is always objective as opposed to the human eye. This results in a product with a higher grading consistency, which in turn contributes to better overall quality and customer loyalty. With this machine, we can easily adapt the bunches to our customers' needs.”

"And a better grading also ensures a better price per grading", adds Bas Goede. "80 percent of the flowers end up in bouquets. Poor grading will eventually lead to bouquets looking more uneven and will result in a sales difference for florists or other parties selling bouquets, the consumer will pick the bouquet with the most volume.” 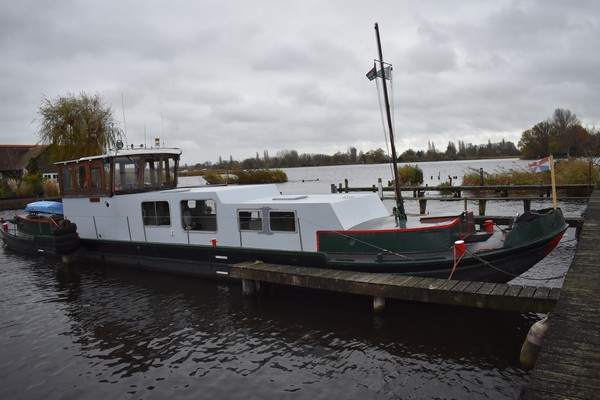 A bit further, the islands where the lilacs grow.

Lilac cultivation
Besides Ilex processing, we also had the opportunity to take a further look at the company. As mentioned above, the lilacs are also processed with Jamafa's grading machine and flower processing line. Processing is done in the same way, but cultivation in an entirely different way and is very intensive. In fact, obtaining a lilac flower requires a 16-step process and there are currently only 15 growers worldwide (mainly based in the Netherlands) that cultivate this product. But what makes it so intensive? Groeneveld gives a brief explanation. "The Lilacs, some more than 100 years old, are grafted and then cultivated on 6.5 ha spread over 28 islets in the Westeinderplas in Aalsmeer (which borders Groeneveld's backyard.) Cultivation takes two years. 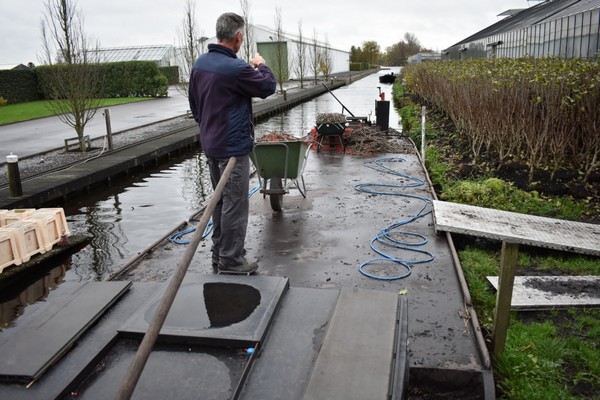 This boat brings the lilacs to the nursery.

In fall, the bushes are taken out of the ground and taken to the nursery by boat, where they will be kept outside the greenhouse until the end of December. The empty fields are covered with mud to maintain their heights. In December, the lilacs are brought inside in small batches and the temperature is raised to 36 degrees Celsius. This loosens the flower. After harvesting, the flowers are processed and prepared for auction. The bare shrubs are trimmed and returned to the fields on Westeinderplas (for a detailed explanation of the whole process.” See the website for more detailed information.

The lilacs are kept outside the greenhouse.

Pot plants
In addition to lilacs and Ilex, Groeneveld also cultivates lighted pot plants. “We have a CHP and we use the heat for the greenhouse and the light can conveniently be used for the pot plants. It's mostly my father's hobby, he sells them to retailers across the country.” 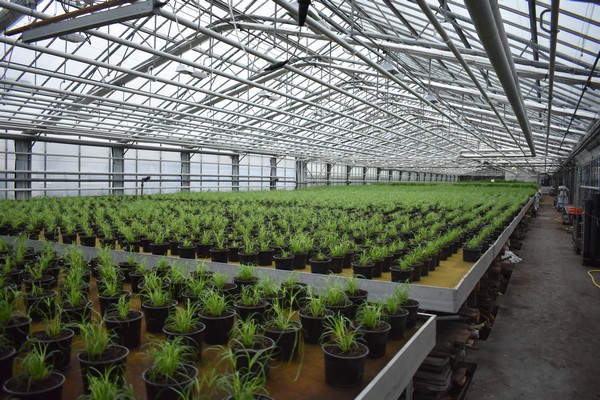