Who in horticulture robotics really knows how far the competition is along?

The fourth edition of Future Trends & Innovations was recently held. Unlike earlier editions, it was completely online this time, and with more applications than ever before, noticed organisers AVAG, TNO, Stichting Hortivation and GreenTech contently.

There was also plenty of discussion from behind the screens, with as an inspiring question at the end of the plenary part whether 'we' in the sector really know who is further along in robotisation: 'us' or 'the other countries'?

That question arose after a keynote speech from Jan de Ruyter, Sector Banker for Plant Sectors at ABN AMRO. Together with colleagues at the bank he presented a report this summer with the prediction that 'the battle for agricultural robots will erupt' and that 'a tripling of the market for agricultural robots in ten years is possible'. During his speech, he expanded on this. 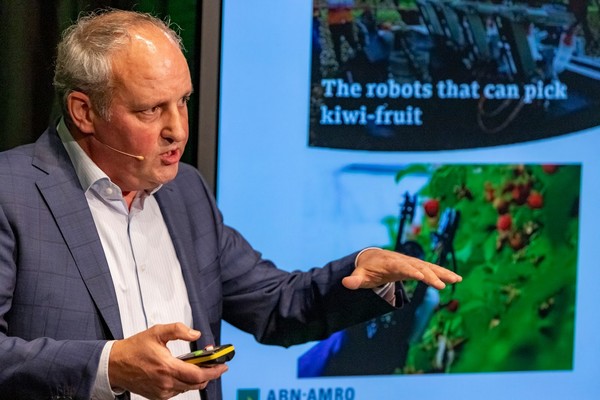 The 'danger' of the 'big guys'
The well-known phenomenons like the increase of labor cost in cultivation, the world food issue and worldwide competition were also touched upon. Competition from the 'big guys' as well, who see growing opportunities in (greenhouse) horticulture, where there are obviously chances for robots.

The question is, is that competition a 'danger' to Dutch horticulture technology companies? Can they keep their strong position in international high-tech greenhouse horticulture when strong parties come forward from for instance Silicon Valley or Israel, where Jan notices significant investments in robotics?

Dutch ecosystem
The Dutch ecosystem for robotics development is doing well, according to Jan and his colleages at ABN AMRO, with lots of universities and innovative companies that are busy with developments in the field of robotics.

Startups too - Jan, on behalf of ABN AMRO, noticed that the bank has a hard time supporting them financially, because it can be hard to assess where those parties are at and what their potential is. Connecting startups and investors to each other, that's a greater strength of the bank.

Netherlands falling behind?
Assessing that potential, and mainly, how far along companies are with their robots, that's not just hard for the bank. In the livechat during the webinar a lively discussion arose, about the question whether the Netherlands is getting caught up with by foreign competitors in the field of horticultural robotics.

The 'pessimists' are certain of that. They hear (success) stories about robots from all around the world, while in the Netherlands, greenhouses are far from robot-filled. A logical thought, probably resulting from the love for the horticultural sector that might drastically change when many parties, some even from outside horticulture, will take over the lead positions.

'What comes from afar, (sounds) good'
On the other hand there's the 'optimists' (or 'realists'?) who nuance each and every story about the birth of foreign robotics players. "The foreign stories about developments often sound further along than they really are", was noted in the chat. The Dutch saying 'What comes from afar, is good', was applicable here. This saying means that something foreign sounds special and therefore people think it is special, which might not be true at all. In the chat it was immediately followed with: "But we can't stand still!"

The 'optimists' point out that the Netherlands is really not doing that. Check the examples of, among other things, multiple (prototype) harvesting robots and robotics for cultivation actions or crop protection. Stories about these techniques also get out, but the Netherlands is 'small' and 'abroad' is way bigger, so these stories tend to get lost.

Especially if you start Googling or snooping on social media. You find so many videos of 'super fast' robots. But it remains hard to estimate how far along those parties really are in their development.

By involving the growers, the very good growers here in the Netherlands, in the development of the robotics, Jan stated. And by ensuring that, where there's legislative barriers, they don't get in the way of the developments too much.

And: by working together and not every man for himself trying to invent the wheel. That too, working individually, may be (one of the) causes of the 'silence' in the field of robotics. Because everyone wants to be the first with the best robot there is, and not risking showing something the other one will take off with. 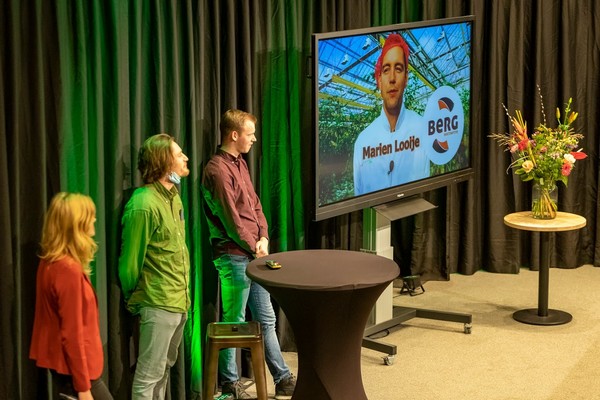 Angela Barendregt, Thijs Res and Pieter Ammerlaan presented a movie with their vision on the 'Greenhouse 2030'.

Greenhouse 2030
The robots, at least large volumes of them, will not be around very soon. But the developments do not stand still. Members of Young AVAG know that too. At the beginning of the programme, they got to share their vision of the 'Greenhouse 2030'.

Pieter Ammerlaan (Havecon), Angela Barendregt (Hoogendoorn) and Thijs Res (VB Group) presented a video, in which a few of the first members from this horticulture technique talent club (of which a second year will be held, told AVAG president Annie van de Riet proudly) shone their light on that 2030 greenhouse.

From the outside, that greenhouse won't be that different than the greenhouses today, but on the inside it will be very different. Greenhouses will be equipped with among other things (full) LED, drones and an increasing amount of automated, data-based climate and irrigation systems.

And, after the above discussion, and interesting idea for the future: the consumer and/or purchaser of a product might, in 2030, have some influence on the production of his tomato or cucumber in the greenhouse. The grower, still in control, could do more for the personalised (taste) wishes of the customer.

Enough food for thought, and for those who didn't have enough yet, a personalised programme followed that involved speakers with innovations for the medium term (5-10 years) and short term (1-5 years).