"Daring approach to thrips at Porta Nova pays off"

At the start of the year, Porta Nova turned its attention to Limonica as the most important beneficial for thrips in a planting of roses that were less than one year old. A daring yet effective approach – thanks in part to a temporary overkill, the pest has kept its head down in the White Naomi cultivar, which is susceptible to thrips.

At Porta Nova, Peter Lansbergen is the man responsible for plant protection. Peter started working at Porta Nova a year ago, and one of the first questions that he asked us was if improvements could be made to plant protection. The company has four growing locations on Abraham Kroesweg in Waddinxveen, covering more than nineteen hectares. The company grows Red Naomi and White Naomi cultivars.

"Plant protection in White Naomi is harder than in Red Naomi. The White Naomi crop is fuller, which means that pests find it easier to hide, plus the variety is also more susceptible to things like thrips. At Porta Nova, cultivation is heavily focused on high quality. We make no concession on climate, lighting, or the growing regime, even if doing so would benefit biological plant protection," explains Peter. 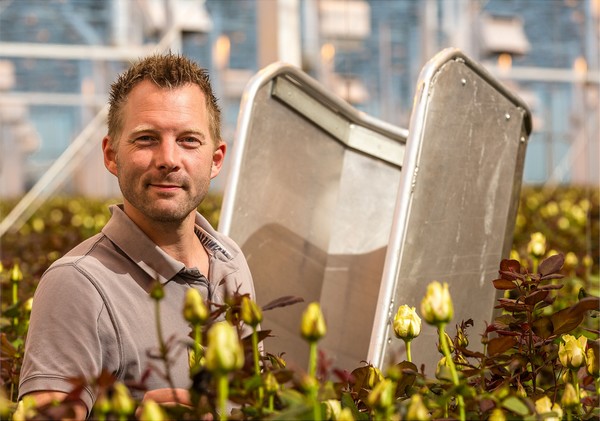 Absolute overkill
Still, White Naomi had to be grown with far fewer pesticides. Working with Vince van der Gaag and Ellen Klein at Koppert, Porta Nova decided to start reducing the use of pesticides at the beginning of 2020 and to start using Limonica – the Amblydromalus limonica predatory bug. Pesticide spraying was stopped and in week seven, once the crop was free of chemical residue, Limonica was introduced.

And it wasn't done modestly either. The beneficial was blown over the crop in an ‘overkill’ for two whole months. In some weeks, as much as eight times the standard recommended amount was used – not 25 specimens per square meter, but 200.

A daring approach
The approach helped, conclude Peter and his consultant Gerard Buitelaar in September. Peter continues, "So far, it has gone well. There was a corner where thrips was causing problems, so we separated that area from the rest of the greenhouse with plastic. With local corrective spraying, extra catch cards, and pheromones (LuremTR), we made sure that the outbreak couldn't spread any farther."

The approach that Porta Nova took was daring. "If it had gone wrong, we’d have had to go back to pesticides, but they had ceased to offer us any flexibility. The number of pesticides is limited and there are so many restrictions on their use. Pesticides are not the way to resolve your problems. In addition, a crop with fewer pesticides performs better on all fronts, which means roses of the highest quality." 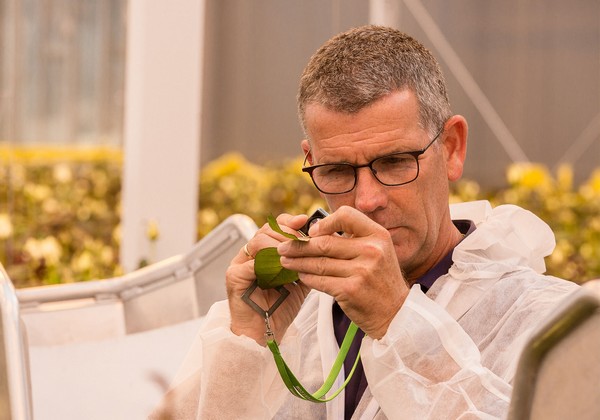 Gerard Buitelaar: ‘We use rinse samples to monitor population development in the beneficials.’

Monitoring with rinse samples
"We use rinse samples to keep track of the populations of beneficials," explains Gerard Buitelaar. "That way, we always know whether we have enough beneficials in the crop or not. It’s the best way to go about it. As already stated, White Naomi is a fuller and denser crop than Red Naomi, and thrips and other pests can easily hide."

They also fitted insect netting with Montdo-Mite, which contains the Transeius montdorensis predatory mite, in locations where potential hotspots could occur. Peter continues, "In addition, in our newest greenhouse, which is 2x 4.3 hectares, we have also installed an irrigation pipe at the bottom of the rose bed. We can then add a Beauveria bassiana-based substance to the water and keep the fallen leaves wet. The active fungus in that product takes care of the thrips, preventing an infestation from the soil."

A necessary investment
Peter points out the huge importance of thorough scouting. The four scouts check every week – the even-numbered paths in the even-numbered weeks, and the odd numbers in the odd weeks. "They are very alert. A structured approach like this works, we never have any surprises. Spider mite, aphids, whitefly, and caterpillars do not cause major problems in Porta Nova roses. Mildew remains difficult, but we tackle the fungus in White Naomi in a number of ways."

In addition, Peter stays in touch with nearby farmers. They were given a tour of Porta Nova, after which they agreed to stay in touch about activities on the land. Peter continues, "This gave us the opportunity to take other things into account. Based on wind direction, we can pull the windows closed and switch the cooling on. We can also add in roof sprinklers and check outside the greenhouse with catch cards. This way, we can prevent thrips from getting in and stop them damaging the flowers."

According to Peter, the big gains of 2020 come from the overall approach that they consciously chose to follow – an overkill of Limonica, local correction, and continuous scouting. "The temporary overkill was an investment, a necessity to bring the use of pesticides to an end. But, we have found a balance and now use normal quantities of Limonica. Everything is designed around keeping that balance, and it seems to be working well. It’s much easier for me to walk through the greenhouse now." 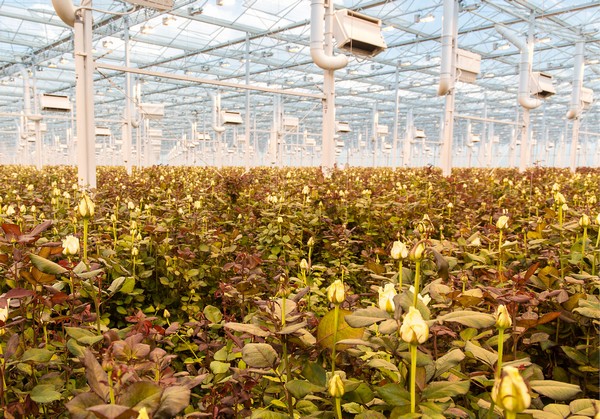 White Naomi at the branch at Abraham Kroesweg 31. The cooling units can be seen above the crops.

The world’s number 1
Porta Nova produces around 60 million Naomis every year, making it the world’s largest producer of the cultivar. The company sends only the highest quality plants to the market and is committed to that decision by giving a quality guarantee on all of its roses. Porta Nova is owned by Leon Dukker, Nico van Vuuren, his son Stefan van Vuuren, and Aad van Luijk.

The company seeks to ensure the lowest possible ecological ‘footprint’ per rose. The newest nursery located at Abraham Kroesweg 31 works entirely without natural gas or cooling. Porta Nova also seeks the highest spot on the podium when it comes to sustainability.