industry unites to get them up and running again

Dutch greenhouses collapsed because of snow

Several Dutch growers have been severely hit by the snow and are currently working hard to save their crops. At the same time, the inventory phase is still in full swing, various horticultural suppliers announced this morning. More than 200 growers have already reported damage to the insurance company, including four growers with (partially) collapsed greenhouses.

Concerning the latter, it received a lot of attention yesterday. The growers, at least three ornamental growers and a strawberry growers, are all based in the Westland region. On top of that, the fire department called out to a pot plant grower, also in Westland. Moreover, we also heard about severe damage at a grower in Drenthe (Northeast part of the Netherlands). 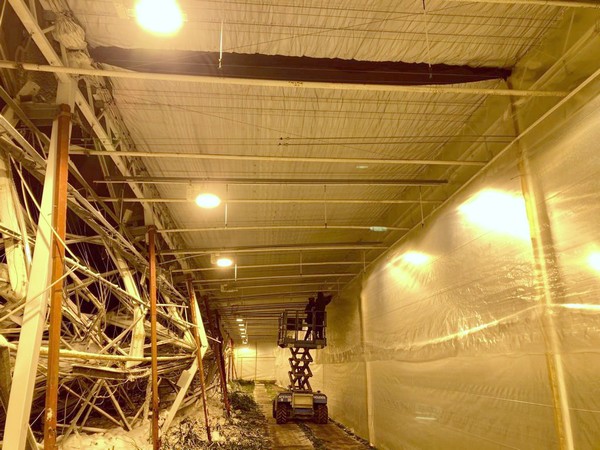 Inside the greenhouse of Lievaart Freesia

Collapsed greenhouses
Freesia grower Peter Lievaart from Naaldwijk saw his greenhouse collapse. The greenhouse of approximately 12,000 m2 was slightly lower than the one next to it, so snow that would otherwise have blown off rose on this side. Until there was a meter of snow on top, the structure 'snapped'. Like dominoes the rest followed. At the Dutch broadcast WOS he tells his story and as you can see, the damage is extensive.

At orchid grower Sanfiero in De Lier, exactly the same thing happened. In the same item, in the video above, we see grower Lennart Stolze between his cymbidiums. Especially with the coming days, with a lot of frost, he fears for his crop.

The damage at orchid grower Levoplant in Honselersdijk was also caused by the snow. The wind caused it to shift, so that the snow load became very heavy locally. Therefore, in the middle of the greenhouse the glass, with cloths and equipment, came down. A hole of about 175 meters, grower Ron Fransen estimates. "This will not be repaired tomorrow," he noted in the Dutch newsletter AD yesterday. "I expect it will take months rather than weeks to fix everything."

Finally, De Westlandse Aardbei in 's-Gravenzande is left with considerable damage to the façade and the greenhouse roof. Some 300 to 400 square meters have come down, estimates grower Jaco Huysman, who also spoke to the newspaper AD.

Assessment of the damage and repairs
"We have the situation pretty much under control," informs Martijn van Winden, service coordinator at KUBO. "The cases are fortunately not too bad, although there are four cases with larger damages."

The images above are bizarre and painful at the same time, especially for those involved. "Accumulation of snow on the deck caused parts to collapse," says Martijn. "And greenhouses with height differences due to different phase of construction proved to be more vulnerable. That's where snow could accumulate."

He also sees that the glass deck broke, but the glass remained stuck in the screens. "Larger shards do cut through the screen," he says.

Emergency walls and screen repairs
At Peter Dekker Installations (PDI) it is therefore all hands on deck, says Jeroen de Jonge. "Over the next few days there will be several screen repairs on the agenda. When it starts snowing, you actually open your screen to be able to melt the snow off and, in the event of damage, to be able to save your screen and your screen installation. It's then a matter of heating up the greenhouse as much as possible, but unfortunately that's not always possible and growers sometimes decide to close the screen after all. It's still a matter of deciding what's possible, because if the snow falls through, you also damage your screen or your screen installation."

The first priority, however, over the past few days has been the companies with major damage, where emergency walls have been installed. "We are doing our utmost best to save certain parts of the crop by using an emergency wall to keep out the cold. Especially with these temperatures, this is necessary, because if the cold comes in, the whole crop will die." Together with team KUBO, they therefore worked hard. "It's code red, you try to help as many companies as possible in as little time as possible."

Repair kits
At the moment repair kits are mainly used. "Most growers have them already," Martijn says. Repairing damage is a challenge. "Glass is frozen and window frames are snowed in", says Marco de Zeeuw of Olsthoorn Greenhouse Projects.

Larger growers have the advantage of heating capacity. "There the damage is limited," says Martijn. "We have to clear the gutter of snow anyway before some damage can be repaired."

Film
Emergency facades and films are used for this purpose. The latter they supply at Oerlemans Plastics. Henri van Hemert of that company has noticed that there is some extra demand. "There are some extra rolls being ordered to seal things and there is also extra demand for bubble wrap, but we don't supply that."

The company supplies through dealers, although Henri mentions that growers are also coming to pick up the film themselves or have it delivered by Oerlemans Plastics itself.

Beautiful and less beautiful pictures
Just like yesterday on social media lots of pictures. Beautiful and not so beautiful. Below a collection.