Time to reflect on the international rose trade

While florists are still busy with the final preparations for Valentine's Day (February 14), for growers and the majority of the traders, the Valentine's rush is over. So, time to reflect. Overall, the sense of satisfaction predominates from all parts of the world. Demands seem to have surpasses supply and prices were therefore higher, particularly on the open market as many buyers did not dare to order too early, due to the uncertainties caused by COVID-19. Also, Valentine's Day falls on a Sunday this year, which historically speaking isn't such a good day. Colombia and Kenya had favorable weather conditions, whereas Ecuador has several weather issues which made production come a bit late this year. The main challenge for all growers around the globe were logistics; the ones who had organized it well are the winners. Also in Russia, growers experienced an unexpected high demand for their Valentine's roses. 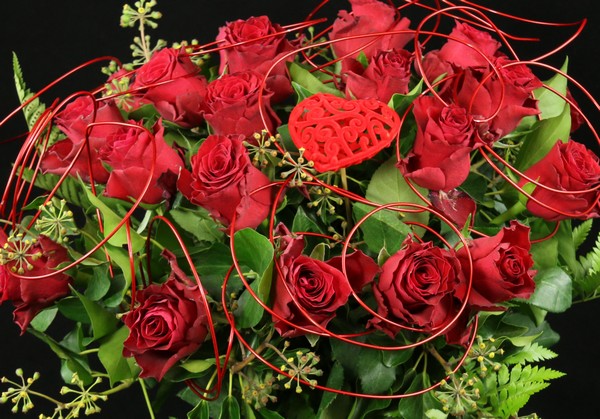 High demand and prices
When talking to several rose growers around the world, they are very pleased with the demand. "We are very satisfied. Given the current market situation, we have good orders and we continued to supply," says Kenyan grower Ravi Patel of Subati Group. Also Ecuadorian grower David Espinosa of Matiz Roses told us that he was satisfied, not only given the COVID-19 pandemic, also the fact that it falls on a Sunday this year. "This always makes you wonder how the whole holiday will unfold, but fortunately everything turned out well at the end."

Demand seem to have surpassed supply. "Demand was very high, and we think that is due to COVID-19 lockdowns. Many farms probably did not want to take the risk and increase their production of reds," says Anath Kumar of Isinya Roses in Kenya. Even Ivan Freeman of Uhuru Flowers, who does not flush their crop for Valentines Day, told us that the demand has been good for the few extra red roses they have.

Also Dutch rose growers report positive sales. "Valentine's went very well," says Tom Meewisse of Meewisse Roses. "Last week, the prices increased fast. The beginning of this week, due to the snow, the market awaited the situation, but since Wednesday, the demand is good again and has been good till today (Friday)." Also Marjoland reports satisfying prices. "The numbers were not high, but the prices were good," says Marjoland's Angelien van den Nouweland. “In the run-up we have had to deal with some uncertainties, cause of the cold days, but fortunatly, we could have maintained a good climate in our greenhouses, resulting in a good quality of roses.”

And a high demand usually results in high prices as well and the figures confirm this. At the Dutch auction clocks, prices were high. Also Örjan Hulshof of Dutch rose breeding company De Ruiter, confirms us that the prices were higher than usual. "According to many traders, the supply felt more or less similar to other years, but the demand was a lot higher," he says. As a result, prices increased. "Ecuadorian growers told us that the prices increased and particularly on the open market. For red, for example, the prices were up 25 to 40 cents per stem and for the colors 5 to 15 cents per stem, compared to last year. When looking at the pre-orders, with fixed prices, only an increase for the reds was noticed; up 15 to 20 cents per stem, while the colors were down by 8 to 12 cents per stem, compared to last year."

Also in Russia, growers informed Hulshof that they've had an unexpected good Valentine's season. "Valentine's Day seems to become an increasingly important holiday in Russia as well. The demand for Russian roses was high and growers had good temperatures, which means not too cold, to grow good quality flowers." 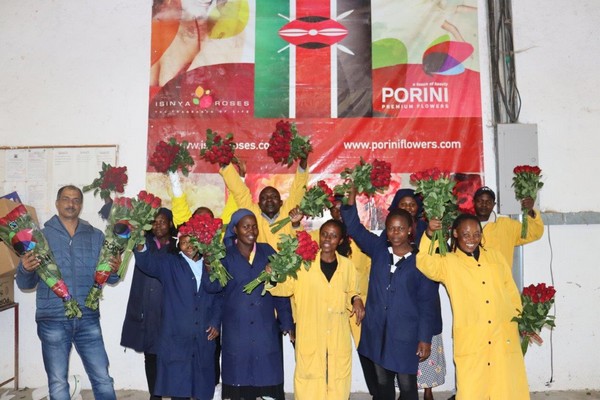 The team of Isinya Roses

Lower supply out of Ecuador
This year, Ecuadorian growers had to deal with a lot of weather issues which affected their production. In contrast to last year, when production came early, this year it was late and the amount of stems was less. "All December and January, we had to deal with less hours of sunlight than usual, combined with more rains than usual. As a result, it affected the production. In our case, it was about 9.8% lower then expected," says Espinosa. And the decrease in supply out of Latin America was also noticed on the market. "Traders told me that volumes out of Latin America were 3-5% down compared to last year," Hulshof says.

Better weather Kenya and Colombia
In Kenya, however, most growers were very pleased with the weather when comparing it to last year when most growers had to deal with a lot of rain, which slowed down production and in turn reduced the supply for Valentine's Day. Now, some growers reported a delay in production due to the cold nights, but the majority is pleased. "The weather has been as it should be every year sunny and dry and subsequently, the quality is very good," says Isabelle Henin of Red Lands Roses. "The cooler morning temperatures  threatened to hold back production but the warmer days from early February ensured most growers to supply good volumes," Hulshof says. "On top of that, we've heard that 2020 has been a very good year for our Rhodos and Ever Red Rose growers."

Also in Colombia, growers reported better weather conditions. "Fortunately, this year, there was no frost, however the climate conditions fluctuated heavily resulting in a more equally divided production curve. As a result, shipments were larger than expected, resulting in logistical challenges," explains Hulshof. 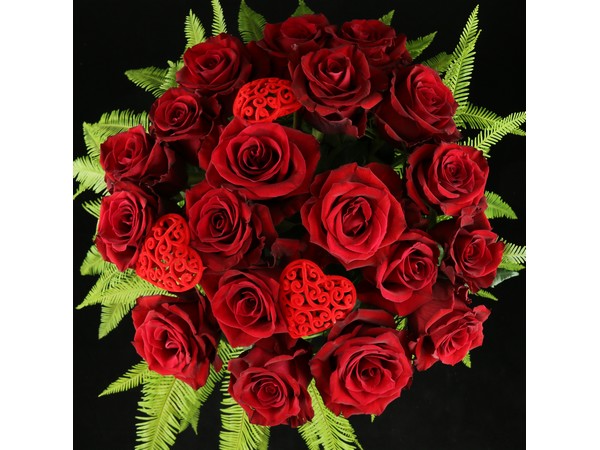 Logistics: the biggest challenge
This year, the biggest challenge were the logistics, all growers reported. Freight capacity and rates remains the bottleneck. According to the Kenya Flower Council (KFC), due the lack of flights and limited space, only 75 per cent the produce could be shipped. KFC Chief Executive Clement Tulezi explains that instead of 4,000 tonnes, only 3,000 tonnes could be shipped to Europe this year. "Many commercial carriers have cancelled flights and freighters have good business with vaccines and PPE around the globe," a grower from Kenya says. In turn, the capacity decreased and the rates increased sharply. Also, Kumar adds, snowstorms in Netherlands effected logistics this year. Also, several delays were reported. "Due to delays to Miami out of Quito, we missed many truck connections," says Espinosa.

Valentine's Day from the airlines perspective - Qatar Airways
Instead of cancelling flights, Qatar Airways added flights. For them, it is their fifth Valentine season from Ecuador, second in Colombia and sixteenth season in Kenya. Last year, they uplifted more than 3,000 tonnes of flowers for Valentine’s Day from Ecuador, Colombia and Kenya. This Valentine’s season, they are uplifting close to 5,000 tonnes of flowers from these countries and some others around the world."

"Demand is very high this year. Out of Ecuador, we are operating eight additional flights ex Quito with flowers destined for European and Australian markets. We also added three flights from Quito to Miami to two of our regular rotations, so we can transport flowers into the United States of America for Valentine’s Day. This doesn’t include our four regular B777 weekly freighters out of Quito. From Colombia, we operate two Boeing 777 freighters to fulfil the export requirement of flowers," says Guillaume Halleux, Chief Officer Cargo, Qatar Airways.

At Qatar Airways, they are pleased with how it all went this year. "Our innovative QR Fresh solutions maintain all types of perishables such as flowers at their optimal temperature from arrival at their origin airport through to their final destination, thus preserving their high quality and extending their shelf life."

No time to rest - Women's Day
Now, even though Valentine's Day is not yet over, many growers are already looking at the next big flower holiday, namely Women's Day. This holiday is celebrated widely with flowers in Russia on March 8, but is increasingly being becoming an important flower holiday around the world. "For the coming weeks, traders expect good sales in the run-up to Women's Day."

It’s in the florist’s hands now - high demand
The majority of the sales will take place tomorrow and on Valentine’s Day, but how was it and what are the expectations in the rest of the world?

From the USA, we’ve heard many positive sounds. The Society of American Florists expects it to be “the biggest Valentine’s Day in decades” for flower sales. "Normally, with Feb. 14 being a Sunday, couples could celebrate with a weekend getaway or dinner at a special restaurant as other options, but with the pandemic limiting possible celebrations, flowers are predicted to be big," they told www.crossville-chronicle.com. California flower farmers and wholesalers reported they were racing to keep up with strong Valentine's Day demand. Online is doing very well and CEO of 1800-Flowers even believes that the company will enjoy the biggest Valentine's Day in its history. However, also florists in the US are gearing up for busier Valentine's Day sales. Austin florists, for example, expect big boost in Valentine's Day sales, but also in New York, florist never has seen a February like this one. Even though Valentine's Day spending down this year demand for flowers up, survey says survey, published on abc30.com

In Canada, florists experienced some supply issues, not only from the farms from Ecuador and Colombia, also from the growers in Ontario. "They're growing locally for us in Ontario with the artificial light, but they still need sunlight, and in Ontario it's been really cloudy, so they're not getting the sunlight that they need," Cindy Robichaud, owner of Kelly's Flower Shoppe in Summerside told CBC Radio's  Island Morning host Laura Chapin. As a result, the supply was less.

Also in Australia, expectations are high. “We have all spent more time at home over the past 12 months and flowers have become a popular way to reach out to loved ones we can’t see in person,” Brisbane Flower Market spokesperson Luke Leeson told us. And also in this country, meeting the demand is a challenge. Glen Butteriss, owner of the Geelong Flower Farm told ABC that the pandemic had been a major thorn in the side of the industry. "There's definitely less supply, about 30 per cent ... simply because of COVID and people not planting crops the way they usually would," he said. As a result crops are delayed. Also, the demand seems to be higher; in general there is more demand for flowers to show people they care and as the pandemic also coincided with Lunar New Year demand for red and yellow roses increased even more. Many roses are imported and wholesalers told ABC news that they had found the availability of imported long-stemmed roses had reduced this year.

In the UK, bunches are more expensive this year due to Brexit. "The cost of a bunch of flowers has increased by up to 10% this year compared to last Valentines Day partly because of tariffs imposed by the European Union after Brexit," Metro.co.uk reports.

Worldwide, also in Kuwait and Ireland, online sales seem to have increased.

Not everywhere is rosy
However, Valentine's Day is not everywhere so rosy this year. Exports out of India are low. Hosur’s rose exports, for example, have seen a steep fall of 80% in exports, Hosur’s flower growers told thehindu.com. Also in Nepal, Pattaya in Thailand and Malaysia, sales decreased.