Getting rid of moths with delta traps

HortiPro develops natural and biological agents as an alternative to chemical agents. In the case of the Duponchelia fovealis moth, which is typically fumigated, a test was done with gerbera delta traps in combination with special Duponchelia pheromones. The result was a clear reduction in the number of vermin.

In some crops, Duponchelia fovealis can cause a problem. These are often ornamentals such as gerbera, alstroemeria, rose, and various pot plants. The moths are responsible for spreading the infestation and the caterpillars for the damage to the crops. 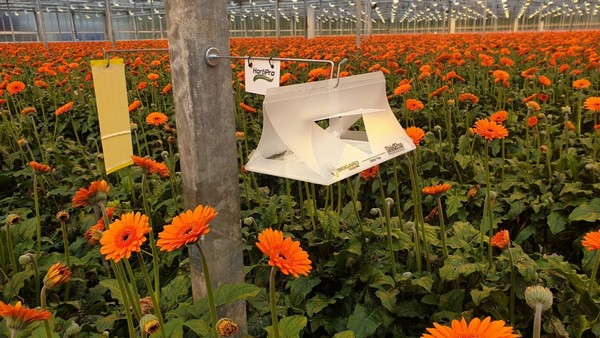 The female lays 250 eggs in small groups. The eggs are preferably deposited under the leaf, close to the bottom. After hatching, the young caterpillars feed on dead and living plant parts. With pot plants, this is often the plant root, which directly leads to growth stagnation. It is therefore very important to take timely action.

In most cases, growers choose to combat the caterpillars with, for example, selective chemistry or products based on the Bacillus thuringiensis bacteria.

However, according to HortiPro, a company that develops natural and biological agents as an alternative to chemical agents, prevention is better than cure. Therefore, the focus is on monitoring the Duponchelia fovealis moths with the HortiPro delta traps and special Duponchelia pheromones.

The pheromone should be placed in one of the holes in the trap with tweezers or latex gloves. The pheromone remains effective for 3 to 4 weeks.

Results in practice
Over the past year, HortiPro has investigated the capacity of the HortiPro delta trap and the pheromone. Gerbera was chosen as the host crop. Three sensitive cultivars (Bison, Sailor & Suri) have been monitored and in this case, they were monitored intensely. The graph below shows how many moths were found in the various delta traps. 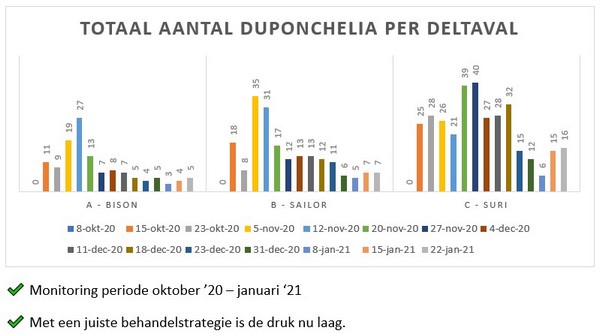 The graph shows the number of Duponchelia (male moths) that were caught, Jürgen Brokelman explains. In the trial, one HortiPro delta trap with a duponchelia pheromone was used per cultivar. These traps were checked and counted every week. In some traps, 30 to 40 male moths were caught. These moths can't mate anymore, which reduces the number of vermin.