The period from week 8 till 10 is one of the busiest times of the year for young plant suppliers and growers. However, this year, several were and are still dealing with supply issues due to the cold water. The extreme cold weather in early February delayed many shipments via FedEX. Then came the big freeze in Texas and southern states which shut down the FedEx terminal in Memphis, Tennessee causing the disruption in both incoming unrooted cuttings as well as outgoing young plants from rooting stations around the country. 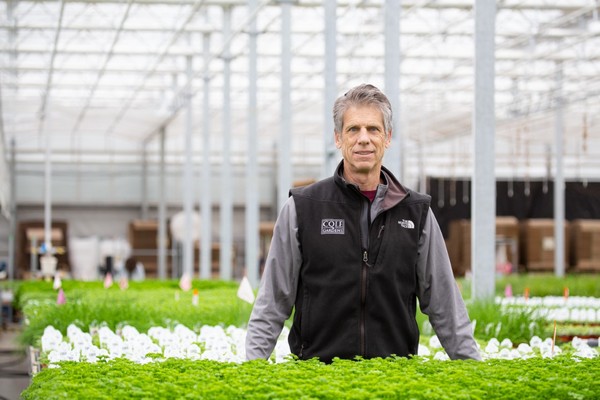 Doug Cole in the greenhouse

No cuttings, no young plants
"FedEx was shut down for more than a week," says Doug Cole of DS Cole growers, one of the young plant growers affected. The worst thing for them was that a number of their incoming shipments got stuck at the FedEx terminal in Memphis and Tennessee. "They were at no value when they finally arrived here."

Also growers were affected. "Many of our young plant shipments to our customers got stuck at the FedEx terminal in Memphis. Some shipments from us to our customers were sent to arrive overnight but instead took a number of days to arrive. I believe one shipment contained 4 boxes and the boxes arrived at the customer over a 3 day period."

Pleased with the buffer
Fortunately, Cole always orders a buffer, and this year, he is very pleased he did as they could make some substitutions. "Usually, we order buffer products for two reasons; one to ensure that we will have enough product. Also, because we want to have some products available when we receive unexpected new orders."

Extremely busy
And this occurrence makes these busy weeks - which are even busier than previous years- more hectic, explains Cole. "This year, orders were high as growers are preparing for strong sales. Therefore, the delays can create frustration for some, but fortunately, we are trying to them back to schedule as soon as possible."

Cole expects the situation to return to normal soon. In weeks 12 and 13, everything will be back to normal.