UK: Import of cut flowers from Kenya and Colombia up, Netherlands down

Right after Brexit came into effect, on January 1, 2021, the cut flower trade flow changed. In January 2021, the UK imported less cut flowers from the Netherlands, compared to the January months in previous years. In British pounds, imports were down by 20% compared to January 2020. The import of cut flowers from Colombia and Kenya, however, increased sharply; the import out of Kenya even doubled (+109%). Still, the Netherlands, remains the major supplier of cut flower for the UK. 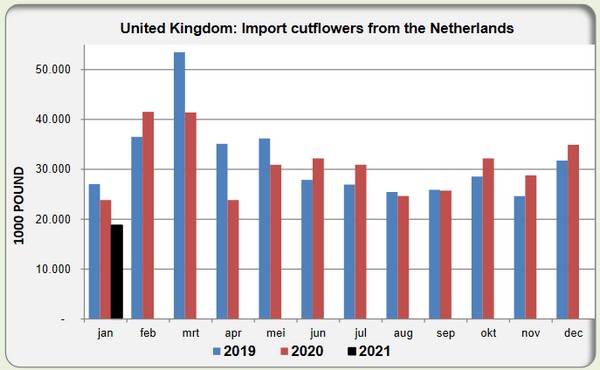 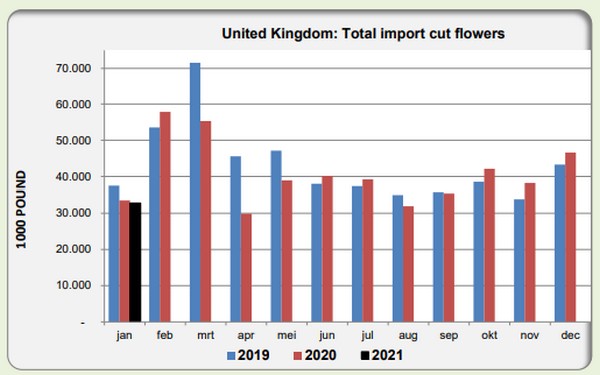 Many imports of roses, particularly from Kenya
The import of roses increased sharply, +51% compared to Janyrat 2020, and even became the most important product in the total import range, surpassing the category other/bouquets. Within the Dutch range, roses and lilies did very well, increasing in value by 1% and 16% respectively. The cut flower imports from Kenya consist almost exclusively of roses. Also noteworthy is the strong growth of imports of roses from Colombia. The group other/bouquets did not so well and decreased by 30%. Other important products that are imported during that time of the year are chrysanthemums, lilies, dried flowers, carnations, orchids, ranunculi, and gladiolus. In the majority of the groups, a decrease can be noticed, with orchids and gladiolus showing the sharpest drop (orchids: -78%, gladiolus: -68%). Imports of lilies and ranunculi, however, increased by 17% and 20%.