Light is perhaps the most important consideration for optimizing plant growth in a greenhouse or vertical farm. There are several myths surrounding the specific light spectra used for growing crops and, more specifically, the use of white, green, or broad-spectrum light. This article is the second in a series of interviews with Signify’s Esther de Beer, manager of the team of plant specialists at Philips Horticulture. In this interview we asked the question: Do you need ‘white’ light to grow better crops? 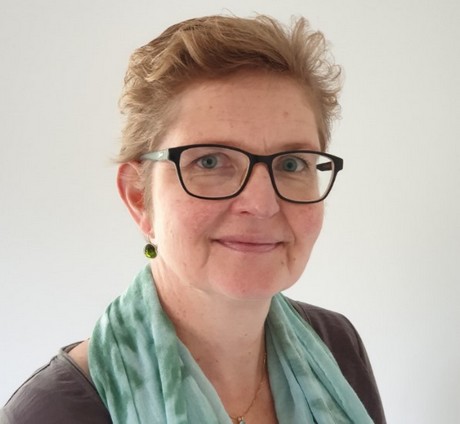 Esther de Beer, manager of the team of plant specialists at Philips Horticulture

First of all, what do we mean with white and green light?
When talking about light for plants, we often distinguish four basic colors: blue (400-499nm), green (500-599nm), red (600-699nm) and far-red (700-799nm). Purple light is actually a combination of red and blue light. Basically, you will get white light when you add enough green light to this red/blue light. Therefore, we will focus on the question whether you need green light to grow better crops.

How efficiently does a plant use green light for growth?
In the first interview, it is explained that blue, red, and green light are absorbed equally by a plant canopy and only far-red light is absorbed significantly less. But are all these colors used equally for growth?

In the early 1970’s, McCree measured photosynthetic efficiency as a function of wavelength for a large number of plants. These data show a large commonality between the plants and have been averaged to what is now known as the “McCree curve”, see figure 1 below. 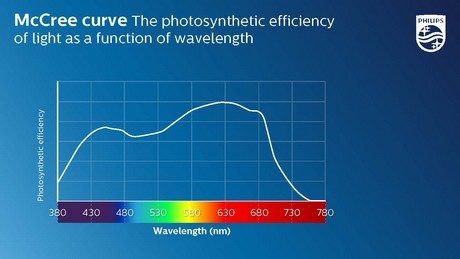 Figure 1 McCree curve: the photosynthetic efficiency of light as a function of wavelength

This shows that green light is used for photosynthesis, but at a lower efficiency when compared to red light. Since this early work, many researchers have found similar results.

For overall plant growth, not only the process of photosynthesis is important, but also other processes which, for instance, influence the shape of the crop. Therefore, for practical applications, it is relevant to evaluate the total crop growth rather than only zooming in on photosynthesis.

At the Philips GrowWise Center, we have run a trial where we have grown eight RijkZwaan Salanova lettuce varieties under light spectra with both 0 and 20% green light, but with the same photon flux and percentage of blue light. The graph below shows the relative fresh weight of these crops, comparing the growth under both spectra with 0% green and 20% green light. 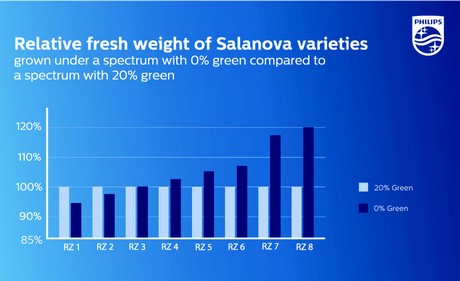 As you can see in this graph, not all lettuce varieties react the same. There are two varieties (RZ1 and RZ2) that grow slightly better under the spectrum with 20% green. However, most varieties have significantly higher fresh weight (even up to 20% more fresh weight for RZ8) when grown without green light.

The small effect which green light has on the growth of a crop is confirmed by an extensive academic study by Snowden, who compared the growth of 7 diverse plant species under 8 different spectral compositions: “In contrast to the significant effects of blue light, increasing green light in increments from 0 to 30% had a relatively small effect on growth, leaf area and net assimilation at either low or high PPF”.

A second example from our own research is related to medicinal cannabis. In this trial, two different cultivars were grown under three different light spectra with 0%, 6% and 36% green at the same supplemental light level (600 µmol/m2/s).  Here, in addition to looking at the flower weight, we also looked at the quality of the crops.

The graph on the right in Figure 3 below shows the dry flower weight for two different cultivars, whereas the graph on the left shows the percentage of active compounds, which are the key factor in determining the product quality for medicinal cannabis. 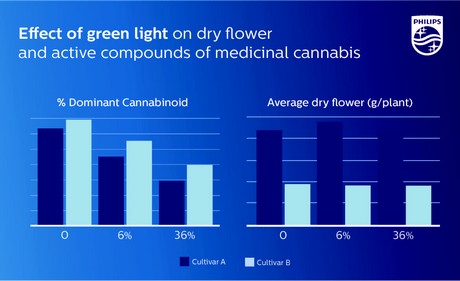 The graph on the right shows that the dry weight remains the same for all three spectra, again confirming that the amount of green light has little effect on growth. However, the active compounds reduce substantially when the green content increases. Since these crops are grown specifically for their medicinal compounds, this leads to a preference of light spectra which contain little or no green.

To summarize: in our studies we find that different crops require different light spectra for optimal growth. However, in most cases there is no benefit in adding more than a few percent of green; both for the yield and for the quality of the crop.

So, if green light has so little benefits, why use it?
That needs some further clarification; all of the above results describe the use of light by the crop, comparing yields at the same photon flux. However, they do not take into account how much electrical energy is needed to create this light. Since there are big differences in efficacy (mmol/Joule), this of course has a huge impact on the total energy usage.

Our research shows that a spectrum with approximately 6% green light is sufficient for good color recognition by people and is 30% more energy efficient when compared to a ‘sun-like’ spectrum, which contains approximately 40% green light.