It is said that 10 to 15% of the world's agricultural production loss is caused by diseases. And since 70-80% of this plant disease is caused by filamentous fungi, protecting crops from filamentous fungi is an important issue in effectively feeding the world population. In order for pathogenic fungi to infect plants, they must break through the epidermal cells of the plant and invade the interior. In other words, plant epidermal cells act as the first barrier to stop the attack of pathogenic fungi in the environment. So what kind of defense functions do epidermal cells have? 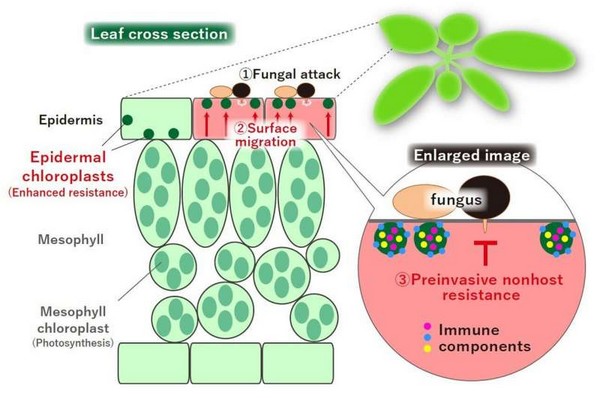 Assistant Professor Hiroki Irieda of the Faculty of Agriculture, Shinshu University and Professor Yoshitaka Takano, Graduate School of Agriculture, Kyoto University, found that small chloroplasts in the epidermis of plants control the entry of fungal pathogens. The duo discovered that the small chloroplasts move inside the cell dramatically to the surface layer in response to the fungal attack and is involved in such defense response.

Read the complete article at www.phys.org.