Controlling fans in a greenhouse

Usually, fans in greenhouses are not regulated. The main reason is that lowering the speed has a negative effect on the fan's throw and circulation rate. This can result in reduced circulation efficiency and increases the risk of climate issues. Vostermans Ventilation knows all about this. "In practice, we sometimes see that customers opt for speed controllers. In most cases, the aim is to reduce fan noise, and in some cases to save energy," they write. 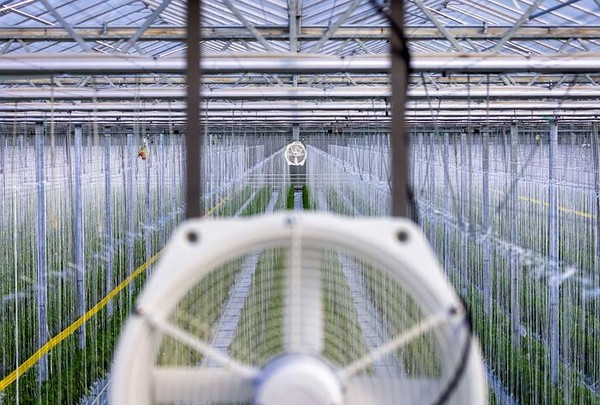 Reducing speed without adverse consequences
One m3 of air weighs around 1.2 kg at a temperature of 20°C or 68°F. This means that a fan with a capacity of 5,000 m3/h actually moves 6,000 kilograms of air per hour. This is why it takes a while before all the air in the greenhouse has been set in motion. Once it has started to move, however, this mass also ensures that the air does not easily come to a standstill again. "In practice, we see situations where, after 2 to 3 hours at 100% speed, the fans are dialed back to around 70% speed. This is usually sufficient to keep the air moving."

Saving energy
Depending on the type of controller, reducing the speed can save energy. This offers the best benefits with Frequency Inverters, less so with Transformers, and the least with Triac inverters. However, there are also significant differences in purchase prices and installation costs.

Noice reduction
"We have managed to significantly reduce the noise of the new generation of Multifan Greenhouse Fans. The most energy-efficient 5,000 m3/h variants hardly even exceed ambient noise. In other words, it is unlikely that these fans will need to be regulated down to reduce the noise," they conclude.