Organically grown hydrangeas from Kwekerij Zeestraten can take a beating

NL: Back in full production after 4 months

Michel Zeestraten stands among his Dark Ruby looking for the first signs of thrips, spider mites or lice. Together with specialists from Mertens and Koppert, he does research to organise his hydrangea cultivation organically. The plants are inspected every week and, if necessary, the biological control agents are deployed. Colleagues regularly come by to share their experiences in growing hydrangeas for cutting. 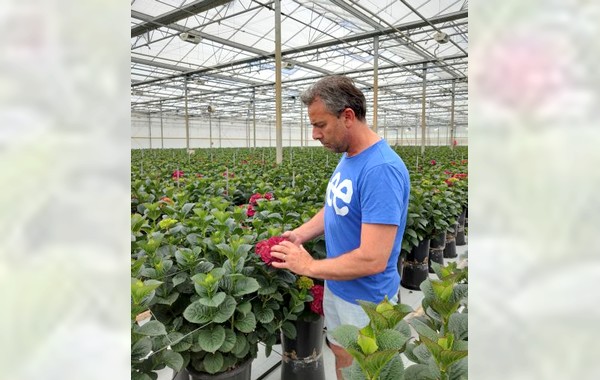 Jos and Michel had pictured the start of this year very differently. The new cultivations, Freesia and Hydrangea, were in their starting blocks when the weather changed in February. Snow showers swept over the greenhouse and snow drifts accumulated in certain places on the greenhouse roof. To make matters worse, these drifts became too heavy for the structure of the greenhouse, resulting in major damage. Parts of the structure collapsed, windows fell out and the crops underneath froze. A scenario you cannot even imagine in your worst nightmares, according to Michel.

The Zeestraten brothers flew a drone above the greenhouse to survey the damage. In parts of the greenhouse where there were still healthy plants, they were rushed to safety with the help of with neighbours, friends and colleagues. The Dark Ruby Hydrangeas were moved several times, while the greenhouse repairs were started. Four months later, the crop is in good health again and Zeestraten has even started selling the first cut hydrangeas. An unlikely achievement, especially when you look at the photos of the badly damaged greenhouse in February.

The local residents appreciate the achievement of the Zeestraten brothers. Back in production after 4 months. Many people from the surrounding area come to buy the fresh cut hydrangeas and Freesias at the selling stall. The stall is open on Friday and Saturday from 10.00 to 16.00 hours. After the summer period Jos and Michel Zeestraten would also like to invite fellow growers for a study visit to the Dark Ruby Hydrangeas. After such a hectic period, they are learning more about organic crop protection every day. "From challenges you can learn the most, and we have certainly done that in the past six months".