Sales chemicals stabilize in the Netherlands

In the Netherlands, the sales of chemicals have been fluctuating at around 10 million kg/year for years now. In 2018, sales dropped below that mark. In 2019, 9.3 million kgs of active ingredients were sold.

That was almost the same level as in 2018. On their website, Agrimatie, Wageningen University and Research analysts conclude that these sales are stabilizing.

More than 40% of the substances used in 2019 were fungicides. And 30% were herbicides (weed-killing substances, including glyphosate). 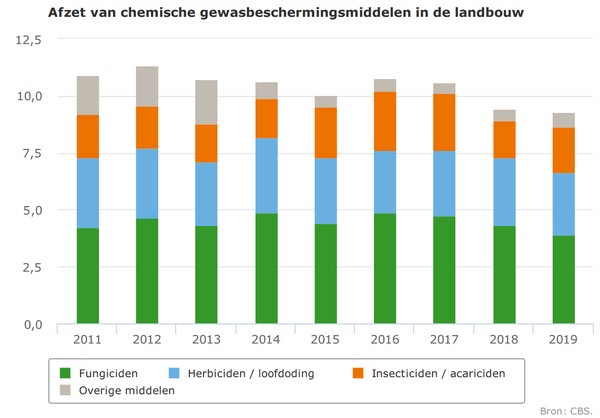 Favorable weather conditions mean less used
In 2019, the spring and summer were very sunny and dry. That's according to the Dutch Meteorological Institute (KNMI, 2019). Dry, warm summers lead to lower fungicide use.

In the agricultural and horticultural sectors, about 50% of herbicides (including glyphosate) were used in arable farming (Smit et al., 2019).

Since 2016, the professional use of chemicals hasn't been allowed outside agriculture. That's on pavements and in public green spaces. This affects herbicide sales in particular.