Ascania-Flora Group, Ukraine's largest rose producer, has been using Oreon’s water-cooled LEDs for its lighting since October 2020. Since then, they have seen their harvest improve and increase. So for Phase 2 (1.7 hectares) they are choosing Oreon again. 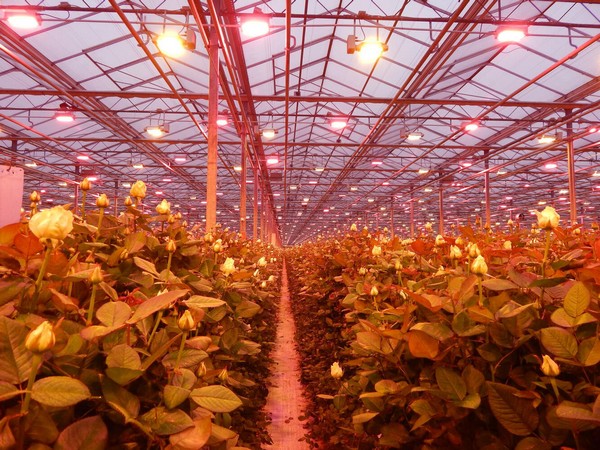 Ascania grows about 220,000 roses a day, 95% of which are for the domestic market. Ascania's market share continues to grow, and they include this in their cultivation strategy. Ascania wants to produce more and be able to target it better. They do so by using state-of-the-art cultivation techniques, including LED lighting. The specially developed rose spectrum, which Oreon put together in consultation with Ascania, contributes to an improved cultivation yield and efficient lighting of the crop.

A rose needs a lot of light to grow. Ascania saw their harvest increase last year after increasing the light level. This was made possible in part because they had switched from HPS to a hybrid lighting configuration. In addition, thanks to the water-cooling technology of the LED fixtures, lighting can be even more efficient. This was one of Ascania’s reasons for choosing Oreon, partly due to the high energy prices in Ukraine. In addition, active water-cooling makes it possible to reuse the heat released from the LEDs. A sustainable and energy-saving solution.

After a successful trial period, Ascania has again chosen a hybrid lighting configuration with HPS and water-cooled LED fixtures for the second phase. Lumex M. was already a supplier of the HPS lighting and now supplies the LED fixtures to Ascania, as in phase 1. The installation of the water-cooling and the LED fixtures is a plug-and-play principle, so it is done by Ascania itself.