Comparing biocontrol to pesticides for Bemisia Whitefly control in poinsettia

T’is poinsettia sticking season once again, and the question always comes down to the same thing: do I use chemicals to control Bemisia whitefly and hope it works this year? Or do I switch to biological control?  Here show some head-to-head comparisons that can help you decide are listed.

An in-depth discussion of this topic was also captured by MSU’s “Bug Bites” last year.

Pesticides vs. bios: efficacy
Because Bemisia whiteflies originate on cuttings, and almost all commercial producers currently rely on pesticide programs for management, your whitefly will likely have been exposed to multiple applications of several groups of pesticides before they enter your greenhouse.

Depending on the suit of chemicals chosen at the producer end, this means that in some years (e.g. 2017, Fig. 1), we will still have effective chemicals to choose from in Canada.

Fig. 1. in 2017, chemicals were as effective as biological control using parasitoids (with or without a predator) in a commercial greenhouse test (1 bay per treatment). Whitefly present on less than 15% of the crop is acceptable to most commercial buyers and is considered a successful program. Predatory mites by themselves were not effective.

But, in other years (e.g. 2018, Fig. 2) we don’t have ANY effective chemicals, even when several active ingredients are used in rotation.

This is because overexposure to chemicals during the propagation phase can drive Bemisia populations to be primarily composed of the “Q” (aka “highly resistant”) species of whitefly by the time they get to your greenhouse. 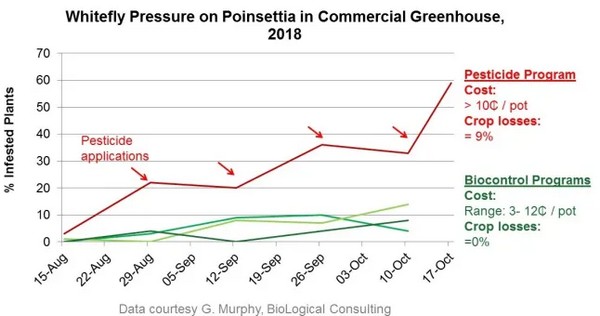 Figure 2. Multiple chemicals were applied against whitefly in 2018, and all failed. All 3 biocontrol programs tests (see below) were effective. Tests were conducted in the same commercial greenhouse as 2017.

Currently, the Q species looks to be resistant to all whitefly chemicals registered in Canada, with the possible exception of the new ornamental registration Ferrence (Cyantraniliprole). This is based on grower trials (below). Products with observed resistance to Bemisa whitefly on poinsettia include Altus (flupyradifurone), Beleaf (flonicamid), Distance (pyriproxifen), Dynomite (pyridaben) and Kontos (spirotetremat). Read more about the different Bemisia whitefly species (formerly, biotypes) found on poinsettia in this article.

Read the complete article at www.onfloriculture.com.