Circular plants at the Green is Life fair in Poland

After almost a year in isolation, we're all tired and missing direct contact with other people. It is no different in the sector of ornamental plants, which in turn translates into new trends that are worth emphasizing.

Every year, the Embassy of the Kingdom of the Netherlands actively supports the Green to Life fair. The idea behind it is, of course, the promotion of greenery (urban and indoor) and cut flowers. The trend for plants is booming, but it is worth developing it additionally, preferably in a practical way: by allowing the visitors to be among the greenery.

At no other time more than during the pandemic, people have realized the importance of the quality of the environment we living in. At first, everyone thinks intuitively about their own homes and apartments, and secondly, about the space at work, but it was during the pandemic that it turned out that urban space alsomatters. Not everyone has access to their own garden, not every afternoon one can visit their own datcha (country house) in the countryside. But it's always nice to go for a walk and that's why it's worth having a green space.

Greenery in Breda
For several years, such spaces have been successfully taken care of by greenery boards, who with great skill and personal commitment change public space into one that is more and more people-friendly. Of course, climate change and the frequent undesirable weather phenomena that take place in cities also have a significant impact on this trend.

Each development has its stages, and the initial stage in the case of green cities in Poland also passed some time ago. That is why, in order to further support the development of greenery in cities, but at a higher level, the Embassy of the Kingdom of the Netherlands invited Tom Rozendal from Breda to the fair, who is responsible for the implementation of the bold vision of this city. Breda wants to become the first city-park in the world. The implementation of this aim is carried out by a number of activities, about which the visitor will talk about on September 1. All his statements will be broadcast by the fair (and translated into Polish).

Green business corner
For years, the fair has been a place where producers and traders meet with landscape architects and finally with the audience. It is a space to look for new nursery novelties and to establish cooperation. Such talks often, but not always, take place at the fair stands themselves. As you know, business thrives in peace, which is why the fair provides a space where you can sit with a coffee and talk about further cooperation. This year, the Embassy will additionally decorate this place with plants to provide a green partition and more comfortable conditions for such talks. As you know, plants clean the air and provide oxygen, so the atmosphere for conversations in the literal sense of the word will also be better. 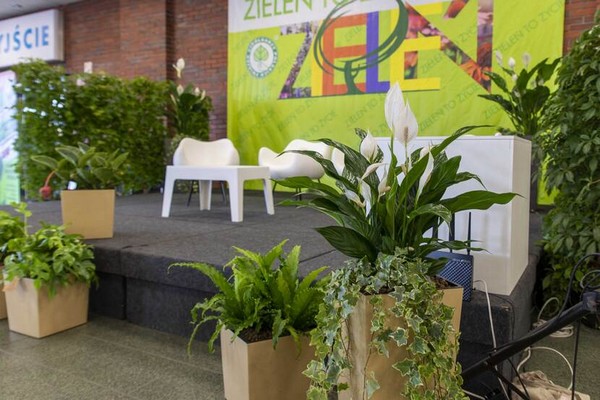 As the pandemic situation is still uncertain, the fair decided to stream some content to provide access to knowledge to all those who, for various reasons, are unable to reach the Expo. In order to visually strengthen the green message offered by the fair, the Embassy provided green indoor plants that will decorate the recorded space and support the concentration of speakers at the fair.

Circularity of plants
As you know, the fair is a great plant festival, but like all events - it lasts only a moment. On the other hand, green indoor plants can be a perennial decoration. The embassy has decided to use this advantage and, after the end of the fair, will store the plants for the next Dutch-supported event, the circular week, which begins on October 11. During this week, the same plants will once again decorate seminars and lectures to draw attention to the potential and importance of nature in the circular economy. As part of these activities, the plants will become prizes in the competition for food waste reduction and will go to their new owners after all the events are over.

It is worth mentioning that also the covers in which the plants are placed 'work' for years and are used by the Embassy on various occasions. The covers were bought back in 2014, on the occasion of the State visit of King Willem Alexander to Poland, and since then they have decorated various events organized by the Embassy, ​​while promoting the most important principle of a closed circuit, which is the re-use of the same item.

Ministry of Agriculture, Nature and Food Quality of the Netherlands
www.government.nl/en