The Sylvia Cup is the country's longest-running live floral design competition. The Sylvia Cup Design Competition began in 1967 and is named for Sylvia Valencia, a prominent designer and long-time SAF supporter. 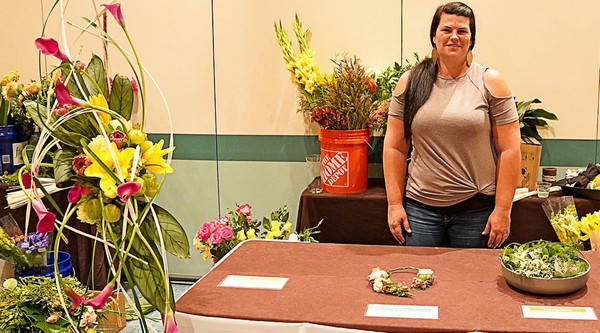 Among the 12 floral designers competing in the 52nd Annual Sylvia Cup Design Competition, eight had participated before. Nine of the contestants are members of the American Institute of Floral Designers. Each contestant received the same materials from the competition's sponsors — flowers and foliage by Certified American Grown and design supplies from Smithers-Oasis.

The challenge was to create three designs in the theme "Artistry through Mythology". Using the inspiration of Greek mythology, the designers transported onlookers to ancient times.

"Floral Piece for Hera" competitors created a floral design appropriate for the mother of a bride or groom in a style that would impress the wife of Zeus and queen of the Ancient Greek gods, Hera.

"An All Foliage Arrangement for Persephone" using the Oasis Floral Media Terra Brick contestants were challenged to create a floral design for Persephone, the Greek goddess of Vegetation.

"A Sympathy Tribute for Helios" each designer created a floral masterpiece for Helios, the Greek god of Sun, and also paid tribute to Orlando – the "Land of the Gold" – by including gold in their arrangements.

Three AIFD Certified Floral Evaluators/Judges appointed by the PFCI Board of Trustees evaluated the contestants' designs. The judges scored each design based on nine factors covering design elements, design principles, mechanics and execution, and creative application. The highest combined score determined the winner.