The Dutch company, Genap, has a rich 70-year history in water projects. Dick van Regteren has owned the company since 2007. But he has been part of its history since 1999. That is when he joined Genap. He was a field salesman for land, road, and water construction projects. That provided him with more than two decades of experience. 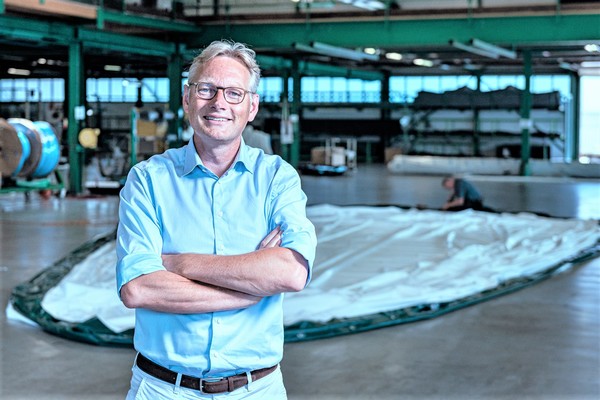 Overseas experience
"My first overseas experience was a trip to the Iranian capital, Teheran, via London. In London, someone stole my wallet. When I arrived in Teheran, the client let me borrow money from their safe," Dirk begins.

"A Dutch bank would've loved to have that safe's contents. I've never seen so much cash at once. A snowstorm, an accident-filled trip up a mountain, and a missed flight. That's what it took to complete that project. It was for a water basin in Kerman. But, what a great experience."

From that point, Genap increasingly began to look beyond the Netherlands' borders. That eventually led to its motto “think global, act local” becoming a reality. It has water storage systems (water tanks and basins) production facilities in Kenya and India. And the company has upcoming joint ventures in Mexico and Canada. So, they are realizing their expansion goals.

Placing solar sheets on water basins
“The Netherlands is where we generate our ideas. Like the latest development. It's a water basin cover, fitted with a solar sheet," Dirk concludes. In early September, they installed that cover at a Wageningen University Research (WUR) site. The first rainwater basin in the Netherlands has, thus, been equipped with the so-called 'Genap Energy Cover'.

This cover prevents algae growth and evaporation. And it uses the available surface area to generate solar power. Farmers can use this for their energy needs. This project was done along with other parties. They are The Netherlands Organization for Applied Scientific Research, Heyet Solar, and the WUR.

This new development will be on display at Greentech in Amsterdam. It will be on the Innovation platform.